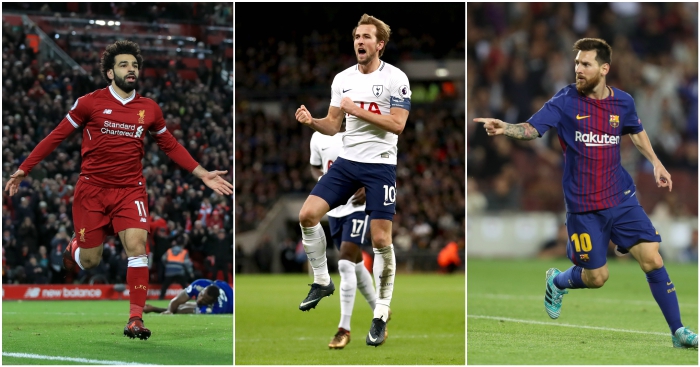 Barcelona, Liverpool, Bayern Munich and Manchester City players are among those in the running for this season’s European Golden Shoe award.

The Golden Shoe is awarded to the top scorer in Europe each season. Well, kind of.

What that basically means is someone from the top five leagues always wins, a rare exception being when Henrik Larsson scored a million goals for Celtic in the 2000-01 season.

In fact, since 2009, no-one other than Lionel Messi, Cristiano Ronaldo and the brilliant Luis Suarez has taken home the award, though that could well change this term…

If injury hadn’t halted his season a while back, Aguero would surely be much higher than joint-ninth.

His 16 goals from 19 Premier League appearances is an impressive return, but if he wants any shot at the Golden Shoe he needs to stay fit.

After his unsuccessful, Jorge Mendes-fuelled loan spells in England, Falcao is back to his best at Monaco, and has hit 16 goals in 17 appearances this season.

The striker even had to refute claims that he lied about his age during his time in England, but at 31 years of age he might have a good few years left to remind the world why he was once clamoured over so much.

And this is a good excuse to revisit this piece of brilliance.

FEBRUARY 2017: Going to do 3 goals per month, starting February with Radamel Falcao's chip goal v Manchester City in a game which ended 5-3. pic.twitter.com/waaGnyrpLR

Not one to shy away from the spotlight, Fekir has already made this the best goalscoring season of his career, aided by his two goals in that derby match against Saint-Etienne in which his celebration caused angry reactions from supporters and a 40-minute delay to proceedings.

Still, 16 goals is a good return for the Lyon captain, who surprisingly hasn’t been linked with a move away this month.

Not counting his debut season, Lewandowski has scored just six fewer Bundesliga goals than he has made appearances.

He has grabbed 17 goals in 18 games this term for Jupp Heynckes’ Bayern, who are even more certain to win the league than Manchester City.

As the top scorer in Europe – for those whose season hasn’t finished – this is where the coefficient comes into play.

The Brazilian’s 23 goals for Benfica are multiplied by 1.5, meaning he sits just half a point ahead of Lewandowski despite having scored six more times.

Anyway, this is a certified “golaço”.

Icardi has been linked with a move to Real Madrid as a possible replacement for Karim Benzema – and it’s not hard to believe they might be interested in the 24-year-old.

His 18 goals for Inter this season make up half of the club’s total Serie A return, so he would be a big loss.

Salah and his fellow Liverpool attackers continue to enthrall us with their pace and flair, and the Egyptian’s 18 goals put him in with a shout of the Golden Shoe.

Before the recent loss to Swansea City, Salah had scored or assisted an impressive eight goals in five games.

The only previous winner of the award to make the top 11, Messi is just two goals off the pace as he attempts to reclaim the award he won last season.

Another win for Messi this season would put him clear at the top, as he has previously lifted the Golden Shoe four times – the same amount as Cristiano Ronaldo.

Neymar and Kylian Mbappe have 19 assists between them this season as PSG tear up Ligue 1, but Cavani is the stand-out top scorer with 20 goals.

And this is how brilliantly they can combine.

The only man on the list with a goal to game ratio higher than one, Immobile has bagged 20 goals from just 19 Serie A appearances for Lazio this term.

Given they have only just returned from their winter break in Italy, he is the one to watch.

It’s quite impressive really how Kane gets linked to every huge club every transfer window but manages to keep performing on the pitch.

Continuing to break records is great, but becoming the first Englishman to win the Golden Shoe since Kevin Phillips in 2000 would be a huge achievement, before he leads England to World Cup glory in the summer.

Maybe one of those will happen.