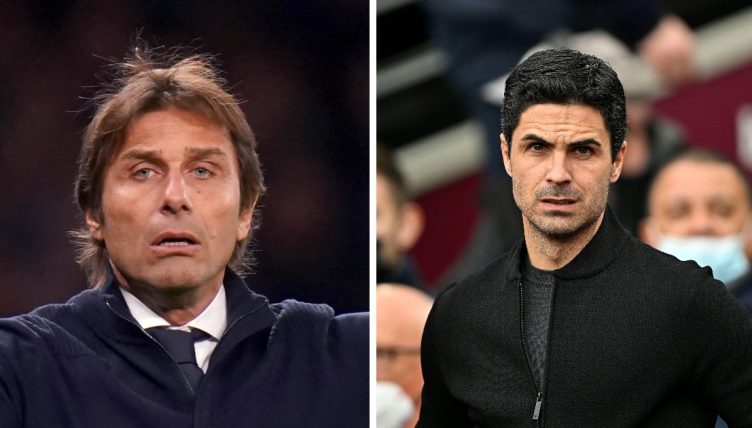 Tottenham’s Antonio Conte and Arsenal’s Mikel Arteta have both been earning plaudits in recent months – but how do the two managers compare?

Conte, who has won trophies with Juventus, Inter and Chelsea, replaced Nuno Espirito Santo in the Tottenham dugout in November 2021.

Arteta has far less managerial experience than Conte but has now been in charge of Arsenal for the last two and a half years.

The two sides battled for a top-four finish in the Premier League but Spurs ultimately came out on top, finishing two points ahead of Arsenal.

Conte’s side recently beat Arsenal 3-0 in the north London derby but Arteta was not happy with the referee’s performance after Tottenham were awarded a penalty and Rob Holding was sent off.

“At Liverpool do you hear me complain about Fabinho and all the fouls? No. He can take my advice if he wants, but if not I don’t care.”

We’ve compared Arsenal and Tottenham’s records in all competitions since Conte was appointed Spurs manager at the start of November. Note: we’ve not included Tottenham’s Europa Conference League game against Rennes as Spurs were forced to forfeit by UEFA.

As the stats show, Tottenham just come out on top with a better points-per-game record and a higher win rate in all competitions. They also average more goals per game and have a better defensive record than Arteta’s Arsenal.

WHAT A HIT FROM GRANIT XHAKA 💥

A moment of quality when Arsenal were looking weary…