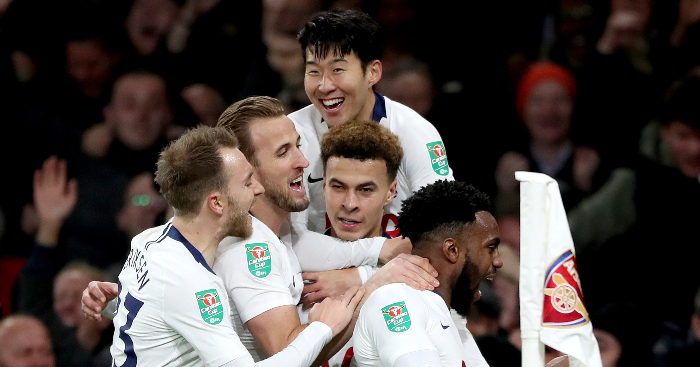 It used to be that Tottenham fans dreaded the North London derby, but they’ve had plenty of moments to savour in recent years.

We couldn’t have made this list from the noughties, with Spurs enduring a painful run of 21 consecutive games against Arsenal without a win, from November 1999 to January 2008.

But the tide is turning, and these results from over the last decade prove it. Here are five of Spurs’ best performances against their bitter rivals.

Strictly speaking, not quite in the last ten years cut-off point but we’re including it because of its symbolic importance.

Tottenham’s only Premier League win away at Arsenal and their first ever at The Emirates was something truly special. It looked to be business as usual when early goals from Samir Nasri and Marouane Chamakh gave the Gunners an early two-goal lead and looked to be sending them back to the top of the Premier League table.

But Harry Redknapp’s men had other ideas and the comeback was on when Gareth Bale – just starting to hit his Maicon-destroying stride – sparked the three-goal comeback in the 50th minute.

17 minutes later, Rafael van der Vaart levelled things up from the penalty spot after an inexplicable handball from Cesc Fabregas. The away section went on to be sent into a frenzy when Younes Kaboul headed in Van der Vaart’s free-kick five minutes from full-time.

“We were either going to get beat 5-0, or have a go. That’s what we did, because that’s my nature,” Kaboul said post-match.

14. Kaboul VS Arsenal. 85th minute winner from 2-0 down to win our first match at the Emirates. Breathtaking. pic.twitter.com/cf2W4uKeRJ

His leading role in the Emirates victory 11 months prior always meant that Van der Vaart would always enjoy hero status among the Spurs fanbase, which he helped solidify here with the club’s 10,000th goal.

Scoring it in the North London derby makes it all sweeter, and Kyle Walker would go on to make sure that the club went home with all three points with a long-range effort that made Wojciech Szczesny look a bit daft.

A combination of those factors make this win a particularly memorable one.

There’s only one name that you need to think about in association with this game: Harry Kane.

Spurs went behind due to a goal from Mesut Ozil, but the Tottenham talisman scored two clinical goals, the second of which was a header that the striker had absolutely no right scoring.

That’s one way to mark your first North London derby, an occasion he’s relished in playing in ever since, notching eight more against the Gunners.

A late, great winner against Arsenal #OnThisDay in 2015 👊

By this point the Saint Totteringham’s day taunts had begun to become a thing a thing of the past as Spurs had began to exert their north London dominance under Mauricio Pochettino.

They’d finished above Arsenal in each of the last two seasons – a run they’ve since extended to four – but had their nose bloodied in Unai Emery’s first derby with a 4-2 defeat in the league.

But the League Cup offered them an opportunity a couple of weeks later to remind Arsenal which way the wind was blowing.

Yes, it was only the League Cup, but it was at The Emirates and made especially memorable by the most beautifully casual finish from Alli.

It’s also their first and only win on Arsenal’s patch since the unforgettable three-goal comeback back in November 2010.

Coming from behind to beat your rivals is always satisfying, and this was another example of Spurs doing just that against the Gunners.

Sead Kolasinac helped Heung-min Son out for the equaliser after Alexandre Lacazette’s opener, but Toby Alderweireld’s header was definitely worthy of winning the game.

There may not have been any fans in the stadium, but fans will have been going wild at home.

This one is unlikely to win any points for style, especially in comparison to their flowing best under Pochettino, but it underlined winning another way can be just as satisfying – arguably more so.

Spurs weren’t especially convincing at the time, but Jose Mourinho still produced a derby day win very much in his own image. Organised, resolute defending that frustrated Arsenal before punishing their lack of cutting edge with a late set-piece. Textbook Jose.