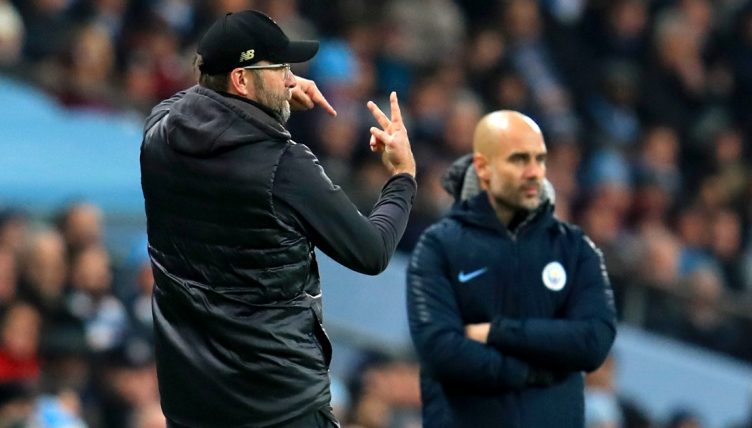 Pep Guardiola and Jurgen Klopp have well-earned reputations as two of the best coaches in world football, with some memorable tactical battles between their time at Bayern Munich & Man City and Borussia Dortmund & Liverpool respectively.

The managers have locked horns 20 times, with an even spread of results. Klopp has come out on top on nine occasions, Guardiola on eight, with just three draws.

The duo evidently have plenty of respect for one another, but there’s been the odd bit of needle too. Here are some of the best quotes the pair have said about one another.

“I think that we are all just happy that Pep himself arrived at his unveiling by foot and didn’t come hovering into the press room,” Klopp, told Bild after Pep Guardiola arrived as Jupp Heynckes’ successor at Bayern Munich in 2013.

“Pep is the most extraordinary coach that comes into mind. He’s a very nice guy and incredibly successful. That’s not a bad thing for Bayern. And the team did not exactly get any worse compared to last season. So one should expect them to do reasonably well.” 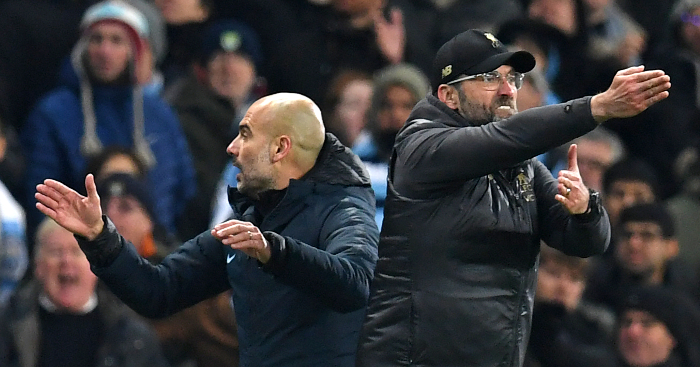 READ: What they said: The five players to work for both Klopp and Guardiola

Guardiola had nothing but respect and compliments for Klopp, ahead of his first meeting with Liverpool after taking over at City in 2016.

“Our styles are not similar but I like a lot the way they play,” Guardiola said.

“Maybe Klopp is the best manager in the world at creating teams who attack the back four with so many players, from almost anywhere on the pitch. They have an intensity with the ball and without the ball, and it is not easy to do that.

“They attack wide sometimes but they especially like to attack from inside, through the middle. I don’t think there is another team in the world attacking in this way with so many players capable of launching moves in an instant.

“I learned a lot in Germany the first time I played his team. I was new and it was ‘wow’, what a good lesson. We lost 4-2. Afterwards in the league I learned a bit more about how to control those situations but it was never easy. When Klopp speaks about his football being heavy metal, I understand completely. It is so aggressive. For the fans it is really good.”

“A second ago I spoke to Pep Guardiola on the phone. Our head physio (Lee Nobes) worked for Manchester City at the start of the year but he wanted to win the Champions League,” Klopp said in his post-match press conference after winning the Champions League in 2019, before clarifying:  “No, it’s a joke!”

“We promised each other that we will kick each other’s butts again next season. We will go for everything and see what we get.”

📆 #OnThisDay one year ago…

“I’m not interested in what people say about me, but I know that people think I’m not a tactician because I’m too lively to be a tactician. I’m the emotion guy,” Klopp told FourFourTwo in September 2019.

“Pep is lively as well, but not that lively. He looks better when he’s shouting. Pep always looks perfect – body, clothes, everything is perfect.

“When I shout, I look like a serial killer. It’s my face – I bite my teeth in a certain way. I look at babies with exactly the same face. Like, ‘You’re so cute.’ And very often the babies start howling.”

“The toughest opponent I’ve faced in my career has been this Liverpool from the last year,” Guardiola told reporters after Liverpool’s Premier League title win.

“They’ve dominated all the records. When you let yourself be dominated and confined in your area, you don’t get out. When you dominate them, they run into space like nobody else.

“They are very fast going backwards. They are very strong strategically. Their players have great mental strength. [Klopp] is the rival who has made me think about how to beat him the most.”

Ahead of Liverpool’s meeting with City, Jurgen Klopp responded to a question about fatigue with a reference to Guardiola’s side.

“We didn’t have a break – I think City had a two-week break for Covid reasons. It’s really tough. It’s a tough season; I know for some teams it looks less.”

The comments were put to Guardiola, who held his pre-match press conference later.

“I’m surprised,” the City coach responded. “I thought Jurgen was not that type of manager, like other ones who are usually doing it. I didn’t expect that comment. But maybe it was a misunderstanding from him. If he sees the calendar again he will realise it was not two weeks, it was two months.”

“I’m not irritated. I didn’t expect it, not from him. He knows it’s not true; come on. Nobody in the Premier League has had two weeks off. Everyone knows it. Some of them, with that kind of situation, do it on purpose but I didn’t expect he would do it. I thought he’s not that type of guy, but, if he did it, OK. Maybe I was wrong.

“He made a mistake – it was two months off, or three months off? No, four. Four months off. That’s why we are in top form right now. Jurgen has to see the calendar again. We had Covid, we had one week and we played with 14 players at Stamford Bridge.”