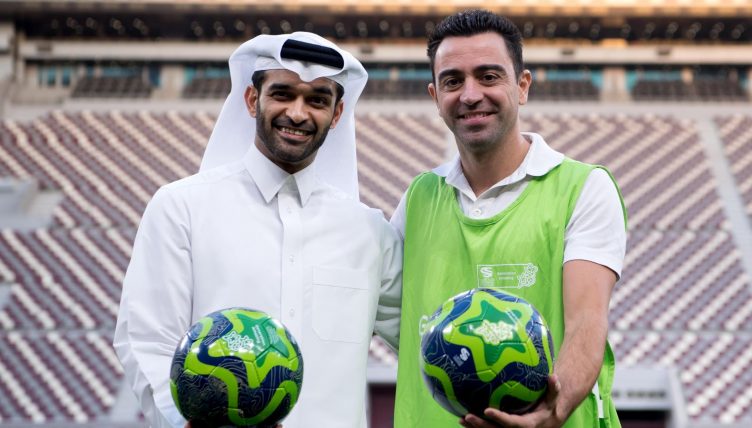 Between 2015 and 2021, Xavi was in Qatar, first playing for and then managing Al Sadd. He added a few more trophies to his collection, but his best moment over there? Winning the lottery in ripped denim shorts.

Xavier Hernandez Creus, better known as Xavi, has had a good career. Playing for one of the best international sides of recent years and one of the best domestic sides ever, he won a World Cup, two European Championships and four Champions League trophies.

He has also won the Qatar Stars League, the Sheikh Jassim Cup, the Qatar Cup and the Qatari Super Cup.

Yes, after winning a domestic treble in his final season at Barcelona, Xavi travelled East to join Al Sadd, a Qatari club whose former players include Raul — another legend of El Clasico — and Iranian superstar Ali Daei.

He won the lot before hanging up his boots and taking over as manager, but even if he had won nothing at all, Xavi’s time in Qatar could never be considered a failure. 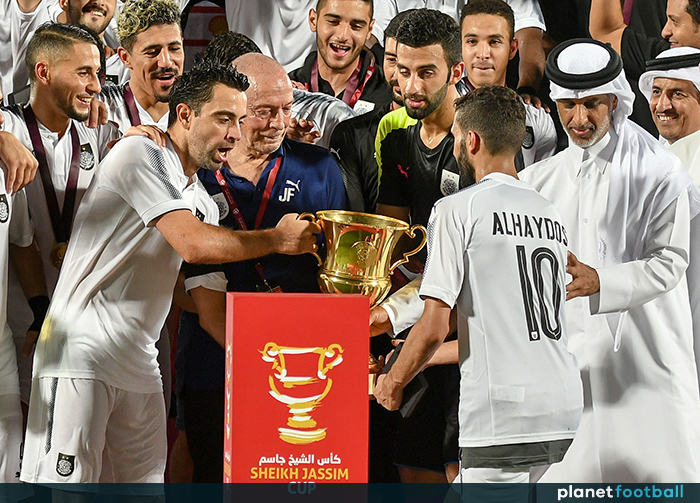 Why? Because on August 27, 2017, Doha Bank announced that Xavi had won the Al Dana Savings Scheme prize — a kind of private lottery — for the month of June, taking home one million Qatari riyals.

It would be fair to say the announcement surprised many. Some were amused; some cried foul. All thought “yes, that seems quite Qatar”.

To announce the news, Doha Bank posted a photo of the occasion.

But there are imperfections in the scene too: Xavi’s name, for example, is the only text on the oversized document written in Papyrus-like lettering, while the ‘1,000,000’ has been carelessly printed on a diagonal slant.

Xavi’s statement is also a source of genuine intrigue.

It starts innocuously enough: “Winning the QAR 1 million cash prize was an unexpected but welcome surprise.”

Sure, welcome surprises are good. You can relate to how Xavi is feeling.

“I had taken interest in the Al Dana program,” he continues, “after hearing about how Doha Bank encourages their customers to save money, and get a chance to become Millionaires, as well as the opportunity to win other cash prizes.”

Helping out a brother?

This is where questions start to arise, because you can interpret that part of the statement in two ways.

Under one interpretation, Xavi wanted to join Doha Bank’s Al Dana program because he respected its efforts to give the average customer a chance to save money, get a chance to become a capital-M Millionaire and win other cash prizes. He wanted to join the scheme because it was doing good things for the average Joes of Doha.

I like this interpretation a lot, but I don’t know how feasible it is. People generally don’t make their banking decisions based on how certain details — things like interest rates and overdraft fees — will affect other people.

Or chasing the dollar?

With that in mind, you might interpret the statement in another way: Xavi was interested in joining Doha Bank’s Al Dana program because he himself wanted to save money, get a chance to become a millionaire and win other cash prizes.

But that’s also a hard one to explain. According to CelebrityNetWorth, a popular and influential celebrity finance website, Xavi is worth around £33million.

Of course, that doesn’t preclude the possibility of Xavi wanting another one million Qatari riyals. In fact, he confirms as much in the next line: “I started to invest with the Al Dana Savings program, aiming to win the QAR 1 Million.”

But from a purely logical standpoint, his personal wealth meant he couldn’t have aspired to become a Millionaire. By even the most conservative of estimates, he already was one.

So what could it all mean?

It’s possible that Xavi, a busy man no doubt, simply isn’t familiar with the typical Euro to Qatari riyal exchange rate. After all, when you’re captain of a Qatari Stars League side and you have a family, you don’t want to be constantly going on XE.com to see if your salary this month is the same as what you were getting in Spain.

It’s therefore totally possible that, when setting up his Doha Bank account, Xavi thought he wasn’t yet a millionaire in the Qatari currency.

It sounds crazy, but current and former Barcelona players — trained as they are to think about nothing but passing triangles — often get their finances wrong, sometimes by pretty extreme amounts.

It’s a mystery that may never be solved, but the lottery at least seemed to brighten up Xavi’s day, if not as much as it did mine.

“Today, I can say that I’m happy that I opened an Al Dana Savings account and invested my savings,” he concludes. “I would like to thank Doha Bank for this opportunity and I wish the same luck unto the other Al Dana customers in the future.”