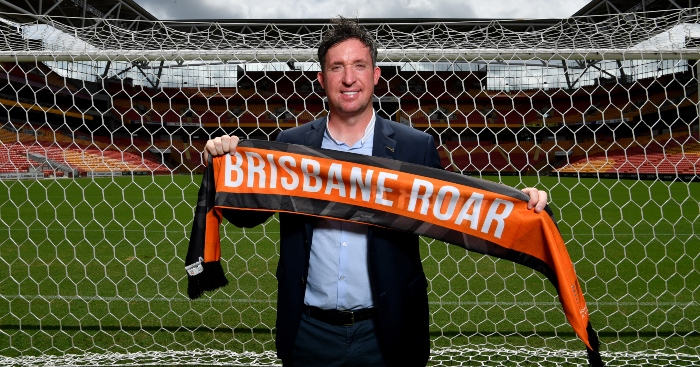 While Frank Lampard and Steven Gerrard have enjoyed a promising transition into management, Liverpool legend Robbie Fowler hasn’t been quite so successful.

Fowler is one of the most revered players in Anfield history, scoring 183 goals in 369 appearances across his two spells with the Reds, but his CV as a manager is extraordinary for rather different reasons.

His first job as player-manager of Thai outfit Muangthong United in 2011 was strange enough, but eight years later, having been repeatedly overlooked when vacancies came up in the Football League, things got really interesting when Fowler signed a two-year contract as head coach of Brisbane Roar in Australia’s A-League, where he had previously played.

Fowler inherited a Roar side reeling from one of the worst campaigns of their history. In 2018-19, they won just four of their 27 league games and finished second from bottom.

You might think, then, that with the Roar fourth (out of 11) when the season was suspended, they’d be excited for the future under Fowler.

But the two have parted company without even playing out the final four fixtures of the campaign, with Fowler claiming the club refused to sort his travel arrangements to return to Australia and the club releasing a statement hinting that it was Fowler’s decision.”We completely understand that family comes first,” said vice-chairman Chris Fong.

It brought to an end a pretty rocky 12 months.

With ex-Everton midfielder Tony Grant working as his assistant, Fowler immediately oversaw a huge overhaul of the playing squad. Fourteen players departed and to replace them, with little knowledge of players in the A-League, it was surprising to absolutely nobody that they looked to what they know best: English football.

They raided England’s lower leagues to bring in players from Carlisle United, Salford City, Bury, Rochdale and Shrewsbury and suddenly the Roar had a distinctly British feel. Perhaps that was Fowler’s first mistake.

He also changed the club’s walk-on music and swapped around the club benches to help his coaching staff influence the assistant referee, a classic tactic from England, but Fowler was soon under scrutiny with no wins in his first four games.

Perhaps surprisingly given Fowler’s incredible goal-scoring record, his team was accused of playing dour football and struggled for goals, finishing 2019 joint-bottom of the A-League.

The first goal of Robbie Fowler's reign at @brisbaneroar! https://t.co/9uWGZY2ViG

Off the pitch, meanwhile, Fowler publicly criticised the league for their salary caps, scheduling of games and refereeing performances.

Then, in December 2019, he hit the headlines when he refused to shake hands with the Western United manager at full-time, another classic from England.

“Foreign managers aren’t exactly embraced by the powers that be out there,” Fowler told The Athletic in April 2020.

“They want Aussie coaches in charge of the team. It’s ridiculous, really, because they are more than happy for them to go and coach overseas.

“Us being there put a few noses out of joint, but that made us even more determined to succeed.”

A bitter war of words has erupted between Robbie Fowler and his Western United counterpart after last night's Suncorp encounter. https://t.co/VZ3A1cpmr5 #7NEWS pic.twitter.com/ylPYk2Yvct

Sure enough, Fowler did start to turn things around following the turn of the year and collected back-to-back A-League Manager of the Month awards in January and February.

By the time the season was suspended he had propelled the Roar up to fourth in the table having lost two of their last 12 matches.

Yet despite their upturn in form, people were still critical of Fowler’s defensive tactics and style of play, which was dubbed ‘Brexit Ball’ by some portions of the Roar’s fanbase.

“Whether it’s because there’s an English manager here – everyone goes on about this ‘Brexit Ball’ or this ‘Brexit Football’ which is ridiculous,” Fowler said.

“People saying that we park the bus – you look at some of the stats before the game and we have more entries into the final third than any team. If you’re a team that do park the bus, then you don’t get those stats.”

Fowler even had an angry confrontation with a fan on social media after they criticised the team. It didn’t do his reputation much good.

Whether you believe Fowler or the club’s side of the story, the nail in the relationship’s coffin was probably hammered in during the break, when the 45-year-old suggested he wasn’t a “priority” for the Roar because he is not Australian.

“With me being a foreigner as such, it just seems I am not a priority,” he said. “Being the manager stuck in the UK, I am still stood down, so it’s a little bit of a nightmare. But we’ll have to wait and see how this one turns out.”

It turned out exactly as we all knew it would.