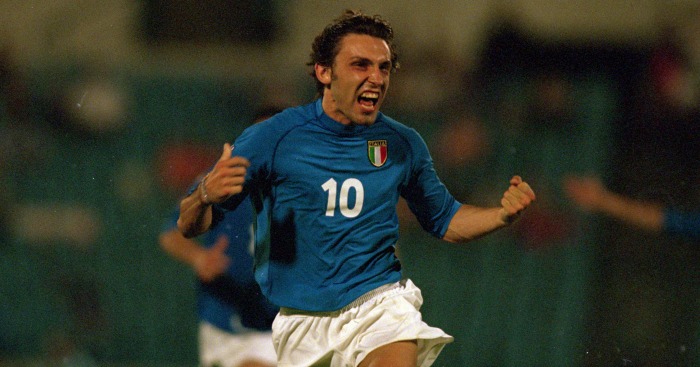 Chelsea and Arsenal are both represented in UEFA’s best ever team from the Under-21 European Championships – will any player from this year’s tournament make the cut in the future?

Marco Asensio and Saul Niguez have both enjoyed excellent tournaments for Spain this year, but they will have to go on to become something special to work their way into this XI.

In 2015, UEFA named their all-time best XI from previous tournaments, and it’s a bit special.

A member of the triumphant Germany side of 2009 which went on to form the backbone of the team that won the 2014 World Cup, Neuer had made his senior debut just two weeks before dropping back down to the Under-21s for the European Championships eight years ago.

His performances at that tournament, where he conceded only one goal (to Jack Rodwell, trivia fans), confirmed his unique goalkeeping talent and led to Bayern Munich declaring their interest, though he went on to remain with Schalke for a further two seasons.

A total of 74 senior caps, five league titles, a World Cup and a Champions League suggest he’s definitely lived up to the hype.

It’s actually quite hard to imagine Ivanovic was ever young, but the former Chelsea stalwart Ivanovic impressed in three tournaments, reaching the final in 2004 and 2007, while scoring in a crucial victory over Portugal as Serbia and Montenegro reached the semi-finals in 2006.

At the 2007 tournament, Serbia’s clash with England descended into chaos and numerous brawls. Ivanovic obviously liked what he saw and moved to Stamford Bridge six months later.

Between 1992 and 2004, Italy won five out of seven tournaments, with 1996 representing their third-successive success as they beat Spain in the final despite having two players sent off.

Fabio Cannavaro was named the player of the tournament, but it was his centre-back partner, Nesta, who earned inclusion into UEFA’s Dream Team.

Only a month after lifting the Under-21 trophy, Nesta was selected for Italy’s senior squad for Euro 96.

Completing an all-Italian centre-back pairing – because, well, obviously – Chiellini played in two tournaments for the junior Azzurri side, though they were eliminated in the group stage on both occasions.

In 2006, he scored a stoppage-time winner against Ukraine, while he netted against England and the Czech Republic a year later.

We’re not gonna lie, given Italy conceded eight goals over the two tournaments, Cannavaro should feel pretty hard done by not to make this team.

Another member of Germany’s illustrious 2009 side, Hummels was actually kept out of the starting XI by Dennis Aogo for the first four matches.

Coming off the back of his debut season at Borussia Dortmund, Hummels started the final in midfield and produced a commanding performance as Germany crushed England 4-0.

Completing the triumvirate of Germany players, Ozil was the star of the show in 2009, destroying England in the final with a performance he would go on to replicate a year later at the senior World Cup.

If Steven Gerrard, Frank Lampard and Gareth Barry failed to shackle Ozil, it should be no surprise Lee Catermole, Fabrice Muamba and Mark Noble also struggled.

Perhaps another disputable selection from UEFA. Spain won the 1998 tournament with the likes of Guti and Juan Carlos Valeron, but Xavi, Carles Puyol and co. could only manage a third-place finish two years later.

Operating as a No.10, Xavi had yet to find his niche as the man to control Spain’s midfield. Thankfully the penny eventually dropped and his legacy among Spanish football is now safely secured.

Completing a central midfield which could possibly have been the most easy on the eye in the history of football, like Xavi, Pirlo was pushed much further forward than we became accustomed to during his exploits for Italy Under-21s.

In 2000, Pirlo remarkably won the Golden Boot with three goals, two of which were penalties, including a match-winning brace in the final.

Jamie Carragher has never forgiven Lampard for being named captain of England Under-21s ahead of him, a fact the midfielder is more than happy to bring up.

He told the Daily Mail: “I remember you getting the hump! I was surprised, but maybe it was something to do with me being more articulate! An England captain needs to look the part, doesn’t he?”

England crashed out in the group stage in 2000, but Lampard made the cut for this team thanks to a goal-scoring performance in the 6-0 thumping of Turkey. Carragher is nowhere to be seen…

Ah, Francesco, you wonderful man. He’s only just left Roma, but Totti was already a star 21 years ago, as he helped Italy win the 1996 tournament.

Forming a strike partnership with Christian Vieri – which might be one of the best Under-21 partnerships of all time – Totti struck the winner in the semi-final victory over France, and has continued to capture our hearts ever since.

Spain were victorious in 1998, but by that point a 20-year-old Raul was already wearing the No.10 shirt for the senior side at the World Cup.

Two years previous, Raul scored a brace in a quarter-final victory over the Czech Republic, before bagging the equaliser against Spain in the final – although he did go on to miss the crucial penalty, which makes us genuinely sad.