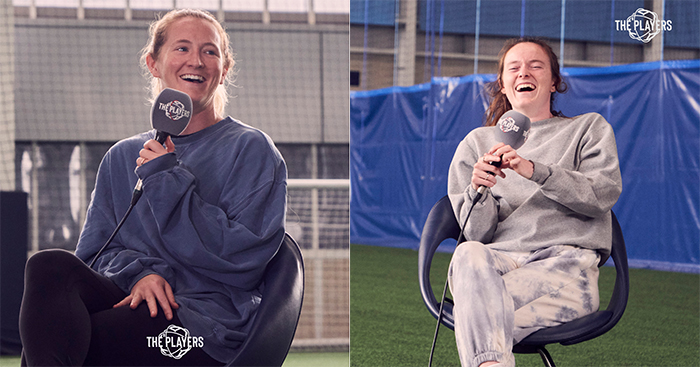 Sam Mewis and Rose Lavelle won the 2019 Women’s World Cup with the United States – yet both were surprised by how “tactically aware” players were when they moved to the Women’s Super League with Manchester City.

Mewis and Levelle joined City in August from North Carolina Courage and Washington Spirit respectively, but though the women’s game has been longer established in the US, both quickly realised their English counterparts had an edge when it came to tactics.

Speaking on the second edition of The Players, a new BBC Sport and COPA90 podcast dedicated to women’s football, Mewis said: “Everyone has been so technical and tactically aware. There are times they’ve seen something develop way before I did.

Levelle added: “You have to be so technically switched on here, it’s so natural to them.”

They talk about what it takes to win a World Cup, life in Manchester and so much more. 🏆

City finished second behind Chelsea in the WSL last season and recently won the delayed 2020 FA Cup final, with Mewis opening the scoring in the eventual 3-1 win over Everton to give the two US stars their first silverware on these shores.

And despite the strength of the game in their home country, Mewis was keen to move to England with City from the moment she first heard of their interest.

“My agent said it might be an option and of course I was interested,” she said. “I know this is such a great club and team. It was the right time and the right decision. I’ve always wanted to play overseas. I was super excited about it.

“Knowing that Rose was considering it as well definitely put an extra little check mark in the pros column.”

However, while there has been some adapting to do on the pitch, neither player considered just how different they would find things in day-to-day life moving from the US to Manchester. For example, learning to live with the famous British hello, ‘y’alright?’

Mewis: “It’s funny because people were like, “Oh, it’s going to be so easy, they speak the same language”, but there are little cultural differences that you kind of have to learn about.

Coming up on #ThePlayersPodcast…@roselavelle and @sammymewy are put to the test, Manchester style!

The first episode of the podcast is also well worth a listen if you missed it last week, hosted by former New Zealand international Bex Smith and featuring Jill Scott and Manchester City and England captain Steph Houghton, who admits she found it difficult to adapt to being handed the armband for the national team.

“When I got the captaincy I probably tried not to be myself and I tried to be everyone’s mate,” she says, “but over 6-7 months I worked hard to be myself and stick to what I really believed is right.”

“It was a surprise to me. There were other experienced players who could have easily had the captain’s armband and had so much more experience than me. I do remember thinking I just I feel as though I need to prove to everybody that it’s the right decision and I ended up losing so much energy trying to be someone that I wasn’t.”

“I spoke to the psychologist and we broke everything down. The only way I can help my team-mates is to play well. It was important to be honest but also to lean on my team-mates because we all bring different strengths and it’s not just about how I want to lead… It’s important that you share the load and at the beginning I didn’t really do that. But by now I feel as though I’m a lot more comfortable in the role I’ve been given.”

The Players podcast is available now on BBC Sounds.