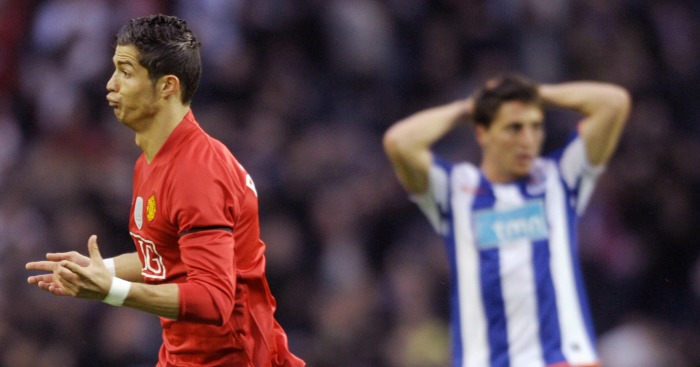 Cristiano Ronaldo has a highlights reel to rank among the very best – and he often saves his moments for the biggest stage.

We’ve picked out a baker’s dozen of his best goals against Europe’s elite – if you want to more of Ronaldo live, you could use the streams provided by major fansite of his ronaldo7.net.

Against the club who gave him his professional breakthrough, Ronaldo’s trademark free-kick in injury time ensured Manchester United topped their group ahead of Roma.

Even better than the goal itself is his celebration. A shrug to suggest, ‘well what else did you expect?’.

The perfect example of Ronaldo’s aerial prowess. It’s not a particularly powerful cross from Wes Brown, but the leap and precision of the forward’s header is outstanding.

At a time when whatever Ronaldo did seemed to come off, the TV coverage almost misses this strike, cutting to a close up as there’s surely no way anyway would shoot from that distance. Oh.

What were we just saying about whatever he tried seemed to come off?

One of the most breathtaking goals on the counter-attack in the competition’s history.

Just keep your eye on Ronaldo’s run after he flicks the ball inside before finishing it off by putting the ball in the top corner.

= One of THE great #UCL counterattacking goals 🤩

His first Champions League goal for Real Madrid – and scored in some style. The Zurich goalkeeper gets close to the free-kick, but typically it is too powerful.

For someone whose free-kick record is sometimes mocked, Ronaldo has scored an awful lot of brilliant free-kicks.

A sublime team goal, finished off by Ronaldo. Real Madrid at their one-touch best.

Noted for his ruthless power, Ronaldo’s first hat-trick in the competition was wrapped up with subtlety thanks to a lovely chip against Ajax.

Just look how far above Patrice Evra he ends up!

Years after he’s retired, the Ronaldo chop will still be remembered.

Can you name every player to have won the Champions League & World Cup?

Cristiano Ronaldo, his Pompey free-kick & a decade of trying to top perfection

17 of the best quotes on Xabi Alonso: “It was clear he was royalty’