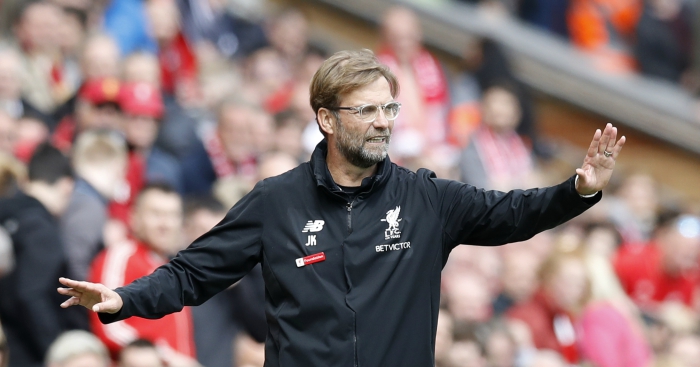 It was a stark contrast to Tuesday night, when Roma won a spot kick in the Champions League semi-final for a similar incident, with the ball hitting James Milner on his arm, despite it being down by his side.

Supporters were left fuming, feeling they are constantly hard done by and left to rue refereeing misdemeanours, having been awarded just one penalty at home in the Premier League all season.

Spurs have had more league penalties at Anfield this season than Liverpool have.

And Guardian writer Joel Rabinowitz chose to dissect the numbers behind Liverpool’s lack of penalties.

Everton forward Dominic Calvert-Lewin, who was felled at Anfield for a cheap penalty in the Merseyside derby earlier this season, has won more Premier League penalties than Liverpool all season.

Crystal Palace, whose top scorer Luka Milivojevic has scored seven penalties this season, have been awarded three times the amount that Liverpool have.

– Spurs have won more penalties in a 10 min spell at Anfield than Liverpool have in 17 home league games.

– Calvert-Lewin has won more PL penalties than Liverpool this season.

– Crystal Palace have won 3x as many PL penalties as Liverpool this season.

The prospect of VAR has also been mentioned, with the potential for Liverpool to be awarded decisions which needed to be reviewed.

VAR was called into action later on Saturday, as former Tottenham midfielder Nabil Bentaleb was sent off for Schalke, having been awarded a yellow card initially.

There was also focus on Pieters at one point slightly holding Salah’s arm as the player ran away from the box, with Marriner appearing to wave play on despite the incident taking place ever so slightly inside the area.

VAR has to come in. LFC up there with the best attacking teams of past 20 years yet 3 pens all season in PL, one at Anfield. Every single game there's a missed penalty. Today there were three possibles and two definites. WBA away there was a definite one. Refs guess.

Then a Reddit thread appeared, entitled “Every major refereeing decision that has gone for and against Liverpool this season”.

It lists five decisions that have gone for Liverpool this season, including one in the Champions League, while counting 13 incidents where Liverpool have fallen foul of apparent refereeing errors.

The conclusion is made that Liverpool have picked up 2-4 points in the league due to refereeing errors going in their favour, while losing an incredible 16 points to decisions that have gone against them.

To put that into perspective, that would put Liverpool two points behind Premier League leaders Manchester City.

At the end of what was a fairly dull game, Liverpool boss Klopp got his chance to confront Marriner and his assistant, who chose not to award the penalty in the 89th minute.

It would all be different if Mohamed Salah had put away his glorious chance in the opening five minutes of the match, but he shocked us all with an uncharacteristic miss.

Klopp refused to shake Marriner’s hands at the end of the match, with the result meaning Manchester United can secure second place by winning their two games in hand.