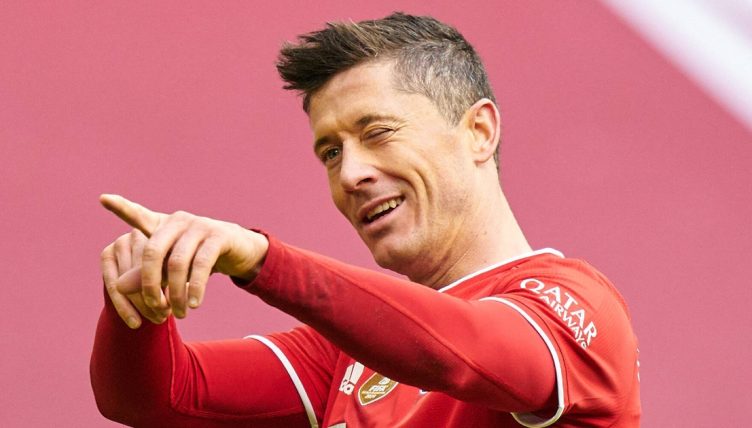 The international break is upon us, and England are eased into their 2022 World Cup qualifying campaign with fixtures against San Marino and Albania.

But then Gareth Southgate’s Three Lions must face the most lethal goalscorer in European football: Poland’s Robert Lewandowski.

The striker comes into this break in the form of his career, having scored a perfect first-half hat-trick for 10-man Bayern Munich in Saturday’s 4-0 win over Stuttgart. Here are nine stats to illustrate just how good he’s been.

– Last season, Lewandowski scored 55 goals in all competitions in Bayern’s treble win. They can’t win another treble this season, but he’s on course to break his own previous-best record with 42 goals already.

– The Poland international has already surpassed his career-best tally of 34 Bundesliga goals from last season. Up to 35 already, he’s well on course to beat Gerd Muller’s legendary tally of 40 goals during the 1971-72 season. He needs to score six goals in the last eight games to break the near 50-year record.

– With 35 goals, he’s 14 ahead of Erling Haaland and Andre Silva in the Bundesliga top scorers list this season. It’s also 12 more than any other players in Europe’s top five leagues – with familiar foes Lionel Messi and Cristiano Ronaldo joint-second for the Golden Boot.

– At the age of 32, there’s every chance that the striker can catch Muller’s record of 365 total Bundesliga goals. Three more seasons at his current rate would do it.

– Since the start of last season, Lewandowski has scored 103 goals in all competitions for club and country. Yes, you read that correctly.