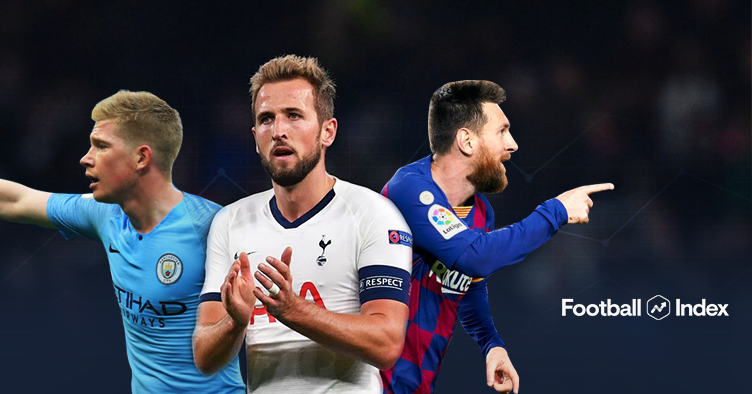 In November, we bought £50 worth of shares on Football Index. Just over two months later, let’s find out how our portfolio is shaping up.

And as it’s January, we’ve entered into the transfer spirit and done some buying and selling ourselves too, landing what we think are a few bargains – including a polarising Frenchman…

This means: If a player ends the day as the most mentioned in the media, and you own shares in him, then you will receive a ‘dividend’ of up to 5p per share. As an example, if you own 100 shares in Paul Pogba, then you could make up to £5.

This means: Similar to the media dividend, if a player performs the best on a matchday, and you own shares in him, then you will receive a ‘dividend’ of up to 8p per share. The Pogba example would apply here too, but this time you could make £8 from 100 shares.

This means: A concept which gives you the chance to win matchday dividends in the first 30 days of owning a player. Typically the previous three methods will drive most of your trading, but if you think, for example, a striker will face a number of leaky defences in the next month, then you could pick up some nice bonus winnings through this.

So after two months, here’s how our portfolio looks.

As you can see, we’ve experienced mixed results. But it’s good news for you because our portfolio provides some perfect examples of the chief dynamics at play on Football Index, which we’ve dived into below.

A good case study here is Lionel Messi. We bought the great man for a fairly hefty £6.69 per share but in the knowledge that the maestro is constantly doing ridiculous things on the pitch, which means he is always a candidate for dividends, if not much capital growth at 32 years old.

And that’s what’s happened so far, with the Argentine netting us a 9% dividend return. We think this will continue in the longer-term, particularly under Quique Setien, who could get even more out of him than Ernesto Valverde by improving the rest of the Barcelona team.

But short-term, he has been a bit of a miss. December and January are historically quiet months in Spain with the winter break coming into force. And with Messi not on the pitch, he’s not been visible or an attractive buy option, and his value has subsequently dropped off.

Given he’s our largest holding in terms of our initial outlay, he has negatively skewed our portfolio – but longer-term, we’re sure he’ll rebound up towards £7 again.

This short vs long-term thinking has influenced our decisions elsewhere too.

Erling Haaland remains the deadly goal threat he was at Red Bull Salzburg – it took him just 23 minutes to score a hat-trick on his Borussia Dortmund debut – but we’ve already made a buck on him, and his transfer rumours are likely to subside for the moment.

So we’ve decided to sell off a third of our holding in him at a tidy profit, which – as we’ll see shortly – we’ve been able to redeploy.

This is another big dynamic in the world of Football Index – and once again, this involves how you think about the short vs the long-term.

Harry Kane’s hamstring has had it – meaning a downward trend in his price – but he should be back fit in a few months and leading England at the Euros (unless mischievous Mou was telling the truth).

So in this instance, we’ve made the decision to take a short-term hit in the hope of a price bounce when he returns. We’ve already made 5% in dividends on Kane in just two months, and his track-record reassures us he should get us some good gains once he is back.

As such, we’re holding him.

Transfer speculation is a huge driver of media dividends in particular. Huge, drawn-out transfer stories, such as Paul Pogba to Manchester United, are the perfect storm for Football Index traders.

That affair dragged on for months, then a huge buzz followed confirmation of the transfer. And the narrative constantly surrounding him at Old Trafford ever since means his appeal remains just as high despite him barely appearing this season.

But for every Pogba saga, there’s a Stefano Sensi squib. Reliable sources were reporting the Inter schemer would be on his way to Barcelona in the summer, and so we piled in.

But he succumbed to an injury which has reduced his impact for Antonio Conte’s side after an explosive start to the campaign in terms of goals and assists.

So we’re going to cut our losses and sell him off, giving us room to look elsewhere.

You’ve got to have a clear idea of why you’re buying a player on Football Index. As we mentioned at the start of this piece, there are four ways to make money – and how you think about each of them will inform your trading strategy.

For example, we bought Kevin De Bruyne because we thought he would rake in the matchday dividends. He’s a pretty uncontroversial guy and looks unlikely to move from Manchester City, so he’s not going to bring in many media dividends.

Neither, given his age, is he likely to deliver huge share price growth.

And therefore we shouldn’t expect him to.

Contrastingly, Jadon Sancho is a bit of everything – hence why he is the second-most valuable player on the Index.

He is likely to move from Dortmund, meaning media dividends. He is one of the best players in the world and only getting better, meaning capital growth. His goals and assists stats are consistently among the best in Europe, meaning matchday dividends.

So you can expect him to bring in returns in all those categories. And indeed he has for us, particularly in terms of capital growth, with a rise of 16% in just two months.

We’ve only got a small portfolio, but if you’d bought 100 shares in him back when we started this little venture, you’d have made a profit of £120. On just one player.

So with the Sensi and Haaland funds – plus what we’ve made on dividends – we have 27% of our initial outlay burning a hole in our pocket.

And we’ve used a chunk of it to buy a couple of shares in Pogba, which we think will prove to be a masterstroke.

The 26-year-old is at one of the lowest price points he’s been at in the last six months – £6.05 – and once he returns to the United team after injury, combined with the coverage of his performances and his future, he could catch alight.

Particularly when you consider he was as high as £8.06 on the Index last March.

And with our spare change, we’ve landed another good deal on Kalidou Koulibaly.

Again, injury means his value has been depressed of late, but he is due to return for Napoli soon and is sure to be taking up column inches between now and the end of the transfer window.

So here is our new-look portfolio:

So there you have it.

Some have come, some have gone. And we’ll see whether we were right next month!