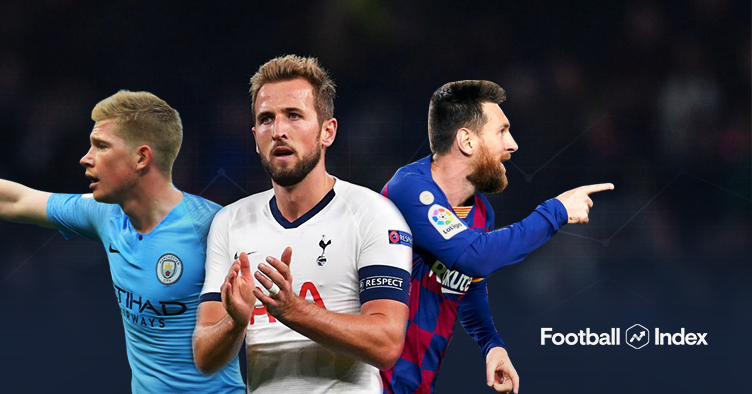 November 2019 seems a long time ago already now, but that was when we began our little adventure on Football Index.

Namely, how far could £50 take us on ‘the football stockmarket’? And the short answer is: quite far.

For the long answer, you’ll want to read on.

This means: If a player ends the day as the most mentioned in the media, and you own shares in him, then you will receive a ‘dividend’ of up to 5p per share. As an example, if you own 100 Paul Pogba shares, then you could make up to £5.

This means: Like the media dividend, if a player performs the best on a matchday, and you own shares in him, then you will receive a ‘dividend’ of up to 8p per share. This dividend is done per position, but there is also a ‘star player’ dividend of up to 8p, meaning you could earn up to 16p per share.

Using the Pogba 100 share example again, this means you could make up to £16.

This means: A concept which gives you the chance to win matchday dividends in the first 30 days of owning a player. Typically the previous three methods will drive most of your trading, but if you think – for example – that a striker will face a number of leaky defences in the next month, then you could pick up some nice bonus winnings through this.

So after three months, here’s how our portfolio looks.

In January we reshaped our portfolio, moving out players we thought didn’t represent value and bringing in Paul Pogba and Kalidou Koulibaly, who we thought would.

A month later, we’ve got a checkpoint to see how we’ve done.

And all in all, things are pretty rosy.

The headline figure after three months trading on Football Index is a sizeable 11% all-time profit on all money deposited since we started this experiment in November.

Now let’s dig into what happened in our portfolio over the last month.

We’ve talked before about the biggest things that typically affect a player’s worth on Football Index – form, transfer speculation and injuries – but this month we saw a new one: the impact of Financial Fair Play rulings.

And specifically on Kevin De Bruyne.

Manchester City’s two-year ban from European club competitions may have more far-reaching consequences in due course, but in the short term, it’s not good news for the Belgian’s value on the Index.

Traders don’t like uncertainty, and while De Bruyne’s future is so up in the air – it’s pretty unthinkable he would stay at City if the ban is upheld – it’s hard to see much money coming into him.

But on the flipside, we’re hopeful that even if his share price dips, the transfer speculation around him won’t, which could mean some nice media dividend returns.

Equally, the situation could drive him to even better performances in the remainder of the season, given it may be City’s last shot at the Champions League for a while.

Some young players flicker and fade on the Index, but Erling Braut Haaland looks like a bonafide superstar.

And aren’t we glad that we picked up the Norwegian at what now seems a scandalously cheap £3.25 in November.

Since that time he has netted us a huge 70% profit, as well as 13% in dividends.

And we can expect more with the Champions League knockouts on the way, and him teaming up at Borussia Dortmund with a certain Jadon Sancho.

It was a momentous month for the Englishman, as he displaced long-time Index king Neymar at the top of the individual rankings.

He topped £9 a share in the process, and with his form continuing to be stellar, a summer transfer in the offing and a Euros around the corner, it’s surely not long before he hits the magic £10 mark.

We’ll be happy to see those gains, thank you very much.

Leo Messi’s explosive Instagram post calling out Barcelona sporting director Eric Abidal set his media dividend points soaring, and if you look across the three months we’ve held him, we’ve already made back a quarter of what we spent on him just in dividends.

However, we have suffered a similar percentage loss in his share price value, thus levelling out some of the gains.

This is really an age play, as traders are starting to think how long Messi can go on for, and perhaps look comparatively at Cristiano Ronaldo’s price of £3.21.

But Carles Puyol said this week that his former team-mate can play until he’s 38, and we still think he has some absurd deeds left in him yet.

Finally, we are playing the waiting game with Paul Pogba, Harry Kane and Kalidou Koulibaly.

Pogba continues to close in on a return to fitness at Old Trafford, and therefore – barring any further setbacks – he should get back on the pitch before the end of the season, which should see his worth rise again from a not already considerable £6.05.

We should also be in line to pick up media dividends from the Frenchman given the column inches his interminable ‘will he won’t he’ transfer saga continues to generate. Thank you, Mino Raiola.

For Kane, we’re in the same boat.

Due back from his hamstring injury in April, there is bound to be a heap of conjecture about his fitness ahead of a home Euros and we are nicely braced for an uptick in not just his value but also his media dividend potential – particularly if England reach the latter stages.

Lastly, we still fancy our chances of landing a healthy payback from Koulibaly.

The Senegalese centre-back hasn’t budged much yet from our initial outlay on him, but his release clause activates in the summer and with Napoli languishing well outside the Champions League spots in Serie A, that could be the trigger that makes him push for a big-money move.

We’ll find out next month if we were Nostradamus or not-a-clue-us….