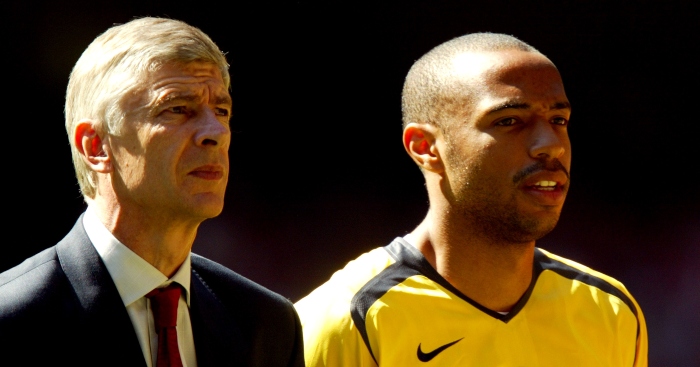 Arsene Wenger made some shrewd signings as Arsenal manager – but equally as impressive was his decision making in knowing when to let players leave.

Several players forced a move out of the club, but often only after Wenger had convinced them to stay long enough to benefit from their peak years.

We’ve looked at the 11 most expensive outgoings during Wenger’s time at Arsenal to see how they fared after leaving the club.

Song established himself as a key member of Wenger’s squad and built a near-telepathic connection with Robin van Persie in 2011-12.

The midfielder’s performances earned him a £15million move to Barcelona, but his time in Spain is best remembered for when he thought Carlos Puyol was handing the La Liga title to him and not Eric Abidal.

Song then had spells with West Ham and Rubin Kazan before joining Swiss Super League club Sion in 2018.

Barcelona spent £16.1million on Henry in 2007, and he left Arsenal as the club’s all-time record goalscorer, with two Premier League titles and three FA Cups.

After struggling for game time in the following season, Henry joined New York Red Bulls and had a brief spell back at Arsenal before hanging up his boots in 2014.

Giroud proved to be Wenger’s last sale as Arsenal manager, with the striker sold to Chelsea for £18million on deadline day in January 2018.

That decision came back to haunt the Gunners when Giroud scored against them and helped Chelsea win the 2019 Europa League final, but he has rarely been more than a bit-part player at Stamford Bridge.

Walcott joined Arsenal in 2006 and was tipped to be the next big thing but struggled with inconsistency during his 12 years at the club.

After falling down the pecking order at the Emirates, the winger decided to make a £20million move to Everton in search of regular first-team football.

But the 30-year-old hasn’t exactly been a rip-roaring success at Goodison Park so far and has only managed 10 goals in 72 appearances for the Toffees.

Anelka arrived at Arsenal from PSG for just £500,000 in 1997 and managed to displace legendary striker Ian Wright in the starting line-up.

The striker’s huge potential made him one of the hottest properties in world football, and he joined Real Madrid for £23million in 1999.

His Madrid move didn’t work out, however, and Anelka later had spells back in England with Liverpool, Manchester City, Bolton, Chelsea and West Brom.

The journeyman announced his retirement in 2015 having represented 12 different clubs in a 19-year career.

Van Persie became public enemy number one at Arsenal in 2012 after completing his controversial £24million move to Manchester United.

“I think you can compare it with being married,” Van Persie told BT Sport in 2019. “Me and Arsenal were married for eight years and after eight years my wife got a bit tired of me.

“I felt that. I had loads of chats with Arsene Wenger and Ivan Gazidis about signing a new contract but they didn’t offer me a new deal so I had to explore my options.”

The Dutchman won the Premier League title in his debut season at United and received a guard of honour on his first return to the Emirates.

However, he fell out of favour under Louis van Gaal and was shipped off to Fenerbahce before ending his career at Feyenoord in 2019.

Sheikh Mansour’s takeover of Manchester City saw a huge amount of money poured into the club and they spent £25million on Adebayor in 2009.

After scoring the fourth goal in City’s 4-2 win against the Gunners a few weeks later, he ran the length of the field before sliding on his knees in front of the away end.

But that was about as good as it got for Adebayor in a City shirt. He was frozen out by Roberto Mancini and completed a permanent move to Tottenham in 2012.

The Togo international recently signed for Paraguayan side Olimpia on a free transfer and that is the 10th different professional club of his career.

Nasri followed in Adebayor’s footsteps two years later, moving to the Etihad for the same fee.

The midfielder won two league titles and produced moments of genius during his five years in Manchester but never really nailed down a first-team place.

In 2017 he was suspended from football for 18 months following a doping violation, and Nasri is now trying to rebuild his career at Anderlecht.

Overmars scored 41 goals in 142 appearances for Arsenal and helped the club win the Premier League and FA Cup in Wenger’s first full season.

However, injuries prevented Overmars from reaching the heights he reached and Arsenal and the winger announced his retirement in 2014.

Fabregas was just 16 when he joined Arsenal from Barcelona and went on to establish himself as one of the best midfielders in the world at the Emirates.

Following a protracted transfer saga, Barcelona spent £28million to bring him back to the Nou Camp in 2011, but he couldn’t dislodge Xavi or Andres Iniesta.

The 32-year-old angered Arsenal fans by signing for Chelsea three years later and he won two league titles with the Blues before joining Monaco in 2019.

Oxlade-Chamberlain’s Arsenal career had stalled by 2017 and the midfielder refused to sign a new contract and forced through a £35million move to Liverpool.

The 26-year-old has bounced back from a serious ligament injury to become a key part of Jurgen Klopp’s table-topping side.