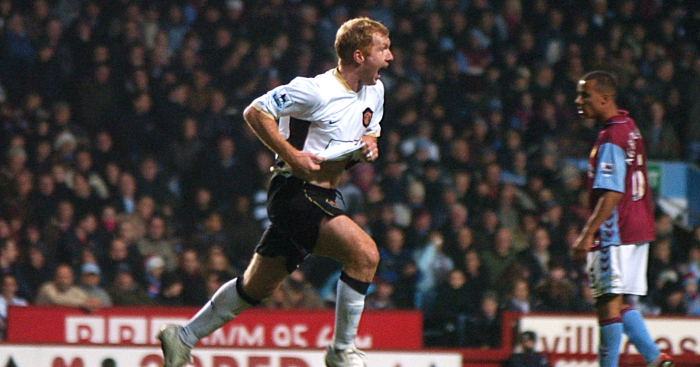 The BBC Goal of the Month competition from December 2006 is rightly regarded as legendary – but no, seriously…which strike was the best?

Normally, the monthly shortlist contains two or three genuine screamers padded out by a collection of above-average strikes that are quickly forgotten across the campaign, but there must have been magic in the air that festive season.

We’ve taken on the ridiculously difficult task of ranking these 10 efforts, in order from our least to most favourite.

Pedersen has form for this kind of thing, regularly launching howitzers from either foot that were capable of decapitating the opposition goalkeeper.

The former Blackburn cult hero started 2006 by scoring a controversial winner against Newcastle in January when the ball appeared to strike his hand. He ended the year by ensuring Newcastle could have no complaints about this stunner.

Like an exquisite karaoke version of Paul Scholes’ effort that very same month – more on that later – but with the added bonus that it was the winner in a relegation six-pointer.

Gillespie didn’t always have the easiest career, so this goal should be seen as cathartic.

This would ordinarily be a strong contender for the monthly prize – a classic Arsenal counter-attack capped by a sweeping finish from Van Persie.

In this company, it seems almost average. Like a Tudor king, we only have the highest standards.

A textbook example of getting the ball out from under your feet and unleashing it towards the goal. Each time it flies into the top corner is worth the 99 times it endangers the elderly fan in Row Z.

Lampard was significantly better than your standard ‘hit-and-hope’ enthusiast, so we’ll give him the credit this goal deserves.

Back in the era where Bentley was a legitimate contender to replace David Beckham in the England squad rather than part-time banter merchant, he was an exciting winger full of excellent technique and explosive shooting.

This piledriver against Reading was delivered after sprinting half the pitch faster than the lovechild of Usain Bolt and the Road Runner. If we’re being critical, no Reading player attempts a challenge. So sixth it is.

An absolute thunderbastard of a goal. Yes, this probably should be higher than fifth.

Tim Howard doesn’t even attempt to save it, choosing to admire the ball sailing over his head instead. And we gave marks to the crunching 50/50 challenge that preceded the goal in Scenes You Just Don’t See Anymore.

Yet there’s a slight feeling of hit-and-hope about this effort that we cannot shake. ‘Tough crowd’ doesn’t even begin to describe us.

Match of the day, question of Sport and still pop up on 100 top goal type programmes. As Matty Taylor ran past me following his super strike against Everton (sorry Bush)

Another effort against poor Everton, who must have angered the footballing gods in the preceding months. Maybe David Moyes had used a picture of Bobby Moore as toilet paper or something.

Anyway, Drogba’s swivel and wallop is elevated by the fact it capped a comeback win for Chelsea in the dying embers of the game.

The combination of the arms-stretched celebration and baggy shirt gives the impression that Drogba was in danger of flying off, an observation that tickled us more than it should have.

Those that stayed away missed this beautifully-timed half-volley by Huddlestone. The midfielder had a habit of striking the ball perfectly throughout his career that would have seen him canonised in Spain or Italy – and this was a prime example.

Chosen as the winner by the BBC, but only ranked second here.

Maybe it’s because we’ve become immune for this kind of thing from Scholes, a player who could topple a pissing Phil Neville from 50 yards.

Maybe it’s because it caused John Motson to quiver with excitement on the original Match of the Day commentary, never a comfortable audio experience.

Maybe we just decided to be contrarian.

But our decision is final, so there.

The competition was incredibly tough, but we considered Essien’s strike against Arsenal to the best of a ridiculously good bunch.

Firstly, consider the context. Chelsea were 1-0 down to rivals Arsenal, during an age when the Gunners were actually competitive. This was the match where Drogba and Jens Lehmann took turns to rut into each other like thin-skinned stags.

Then, the finish itself. Hit with genuine venom and an outside-of-the-boot swazz that would make Roberto Carlos blush. Finally, it was a goal only enhanced by the slow-motion replay in which we can follow the ball deliciously arc its way inside the post. Unsaveable.

Goal of The Day –

Throwback: Drogba reveals how Lampard made him stay at Chelsea