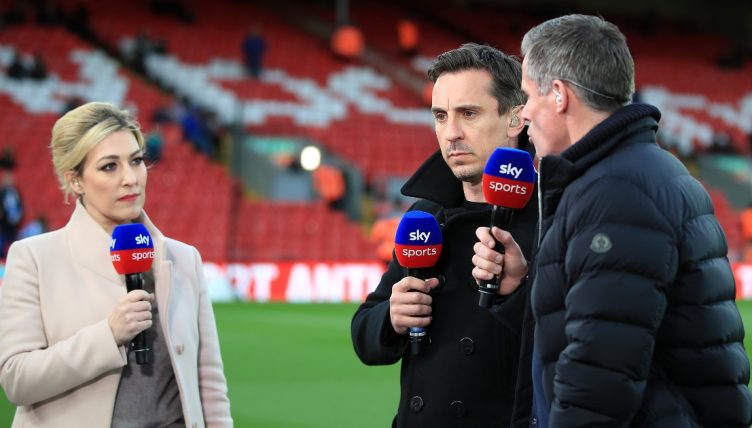 Liverpool‘s dramatic drop in form has been one of the stories of the Premier League season, with Jurgen Klopp conceding what is now obvious: they won’t be retaining their crown.

After waiting 30 years for their first league title of the Premier League era, many tipped Klopp’s Reds to do it again this season. Even after suffering an unprecedented injury crisis, they were top of the table at Christmas, looking at their very best with a 7-0 thrashing of Crystal Palace.

But the injuries have started to bite since then, and the decline has been sudden and sharp, with just two wins in 11 and four defeats in a row at Anfield after 68 league games unbeaten on home soil.

Here’s what 10 prominent pundits, including several former players, have said about their current run of form.

“Seems like I’ve upset some Liverpool fans with my commentary during the derby. I’m not apologising for it, they aren’t exempt from criticism.

“Defenders being out, midfielders playing centre-back does not mean they can’t win home games against Everton, Brighton, Burnley and West Brom.”

🗣 "What this team has done is amazing, but it doesn't mean they're exempt from criticism."@Carra23 responds to upsetting some Liverpool fans for his criticisms on commentary pic.twitter.com/DHDYhT6dK9

“Liverpool are, at this moment in time, nowhere near the team that has been absolutely exceptional for three years,” the former Manchester United right-back said, speaking on his podcast.

“I was light on Manchester City last year when they had that year off, having had three exceptional years of performance, and I’m going to be light on Liverpool this year.

“You can’t go every single year, particularly for four years, it’s inconceivable with these players, the same players, a lot of the time out on the pitch. There’s going to be a dip at some point – and we’re seeing the dip. It’s an alarming dip because they’ve been so exceptional, and they’re here at this moment in time.

“I don’t think it’s a desire issue – they just looked drained, absolutely mentally and physically drained. Like they’ve been run to the end.”

“I don’t know what’s happened with Liverpool, but they look now as open as they’ve ever been,” the ex-Liverpool midfielder said during commentary on BT Sport after Leicester’s third goal in their recent 3-1 defeat.

“Harvey Barnes before goes through, the goalkeeper makes a really good save, this time, it was like the parting of the Red Sea, Liverpool’s defence here.

“I have no idea what’s going on and neither does he (Klopp). Look away, Liverpool fans, this is an ugly goal defensively. How open is that? Easy ball through, Kabak can’t get anywhere near him. 3-1, brilliant turnaround for Leicester. Real worrying signs.”

“Everything that could have gone wrong, has gone wrong. I can’t think of a Liverpool player that’s got close to playing as well as he did last season,” said the Liverpool fan on talkSPORT after the Merseyside derby defeat.

“That’s a problem for a start, Roberto Firmino bothers me – he’s got one goal in 14 games. Yesterday, he looked a shadow [of his former self].

“I thought [Georginio] Wijnaldum looks like he’s played way too much football, which he has because he’s been asked to play a lot of games.”

“I think we’ve all believed the hype over the last year or two. We spoke about there being some sort of drop off, but they [the players] are playing for Liverpool.

“It’s as if they won the league last year and got a bit carried away, and all believed their own hype that they were going to beat teams. But in my mindset when you’ve won a league title, the next challenge was always, can we do it again?”

🗣 "If you keep performing like that it will be another 30 years before you win the league title."

Roy Keane on Liverpool's performances this season & the list of excuses made for their poor run pic.twitter.com/PPFIgeaJeH

“Some of the stuff this week – the talk of Jurgen Klopp leaving – was just ludicrous and totally unfair with the job he’s done. It’s a blip for Liverpool. They’ve dropped below their standards,” Sutton wrote in the Daily Mail.

“To come out and concede the title race… if you’re a Liverpool fan, is that what you want to hear? No, but it’s realism. You could say with the nature of their performance against RB Leipzig, they did look a freer team. This is the competition they have to focus on now, the Champions League.”

“People forget that for an hour against Leicester, it was incredible. They just didn’t put their chances away. It’s almost a weight off the shoulders,” added Richards in the same article.

“Liverpool have been playing well. It’s been daft mistakes. They have no defence so teams have been attacking them more. Alisson has made mistakes he doesn’t make, they haven’t been finishing their chances but they aren’t far away.”

“They have set so many incredible standards but probably one of the reasons they did win the league or did turn themselves around was, defensively, Virgil van Dijk and the goalkeeper (Alisson),” the former Reds striker told the Liverpool Echo.

“And they have had the injury problems and taking the midfield out, ripping it out such an incredible partnership of Jordan Henderson and Fabinho, to take them and put them at centre-half, I think that takes something out of the midfield.

“And then from then, it probably just breeds a bit of [a lack of] confidence really.

“I’d be more concerned and more worried about the fact that they concede a goal and the team capitulates. That is a big concern for me in this team,” Ferdinand said in the BT Sport studio following the defeat to Leicester.

“This was a team you talked about as having leaders, mental strength, resilience, robust. They’re everything but that at the moment. When that goal went in they became a soft touch. Yes, there are mistakes but is there a hangover?”