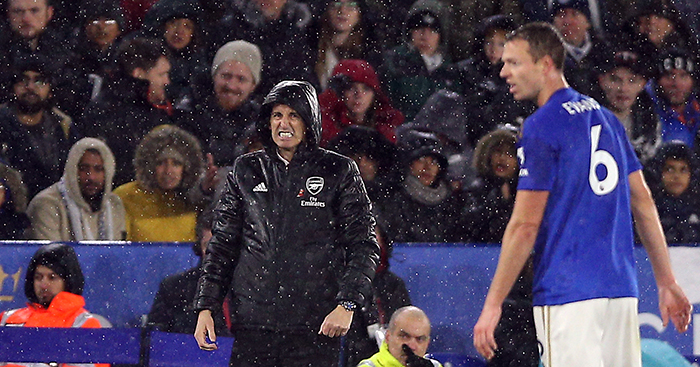 Arsenal were comfortably beaten 2-0 by Leicester City in the Premier League on Saturday evening – and the pressure is really beginning to mount on Unai Emery.

In their three Premier League games leading up to the clash at the King Power Stadium, Arsenal had lost at Sheffield United and then been held to draws by Crystal Palace and Wolves at Emirates Stadium.

A League Cup exit at the hands of Liverpool and Europa League draw against Vitoria had hardly helped the mood, and if Emery was hoping for some respite against Leicester, he will have been left disappointed.

Playing with three centre-halves, Arsenal held out until the 68th minute against the in-form Foxes, but goals from Jamie Vardy and James Maddison in the space of seven minutes broke the visitors’ resistance and left them sixth, behind Sheffield United and already eight points off the Champions League places.

It was the Gunners 50th league game under Emery, but they have won only 87 points in that time, one fewer than they managed in Arsene Wenger’s last 50 league games in charge.

This is now their worst start to a league season since 1982-83, but Emery said afterwards that his side “have time to achieve and recover that distance” to the top four, and the board are still fully behind the Spaniard and were encouraged by the performance at Leicester, according to The Athletic’s David Ornstein.

Here’s what everyone else is saying…

“It’s easy to blame the manager in these situations. I don’t think he’s doing himself a lot of favours – the handling of the captaincy for instance – but today he got them organised. They did the best they could.

“The recruitment has been very poor for a long time now. It’s difficult if you haven’t got the players. The manager must be pulling his hair out because what do you do?

“We came here expecting a good hiding and we got one. That’s not the mentality to have.

“It’s easy to blame Emery. He’s got a group of players here that he’s doing his best with and it’s a bigger problem than this coach, it really is.”

"The recruitment has been very poor for a long time"

Tony Adams has his say on Arsenal's defeat at Leicester pic.twitter.com/PcJ6e9PvhW

“Leicester have confirmed what we thought. They are a better team and a more organised outfit than Arsenal. There is a disconnect between Emery and that Arsenal squad.”

“No definitive style or plan. Negative goal difference. No improvement in the defence. Not creating anything. Why would Laca or Auba renew? Can’t blame them!

“We have to make the tough decision Arsenal! It’s not getting better!”

1 shot on target tonight!! 2 wins in 10 in the league. No definitive style or plan. Negative goal difference. No improvement in the defence. Not creating anything. Why would Laca or Auba renew? Can't blame them! We have to make the tough decision Arsenal! It's not getting better! pic.twitter.com/YYUYyOeUqu

“It’s not looking good. It’s the first time they’ve gone to a back three today and you could tell. They had no plan and there was a complete lack of direction.

“Pierre-Emerick Aubameyang was playing right wing-back at one point and [Hector] Bellerin should have been telling him to get out of the way.

“On the opposite side of the field there was [Alexandre] Lacazette playing left wing-back. How are you supposed to have a chance of playing counter-attacking football?”

“The complete inability to recognise that they needed to change the system or the tempo is worrying.

“That is worrying for Unai Emery.”

“At Arsenal right now it’s very difficult, they’re not playing with any confidence. The manager is under huge pressure no matter what way you look at it.

“The captaincy hasn’t helped him at all and playing [Mesut] Ozil one minute and not playing him the next.

“You’d rather see a team with Ozil playing than not, especially when they’re not winning, because he does add a little bit of something to the team.

“Things aren’t just going the right way at the moment.”

“There are managers out there, but I said three years ago Mikel Arteta would have been the one [I picked].

“If you read about all the stuff about Arteta at Man City behind the scenes, I felt he would be a great fit for Arsenal and I think he would take it to a new direction.

“His English is far better than Emery’s and he would be a massive plus for Arsenal if they chose to make that decision.

“Arsenal have to be brought together. They are a very divided club from their fanbase.

“Their fanbase is totally divided; they were over Wenger, they are over Emery and they are over the players in their team. It’s where the club is.

“Some has got to convince Arsenal fans who are doubters that they’re on the right track.

“Unai Emery hasn’t done that. He hasn’t convinced Arsenal fans, who don’t believe he is the right man.”

“After their end to last season was so disappointing, it is no wonder Emery is under serious pressure right now.

“At least you have to tip your hat to his continuing insistence on playing it out from the back, particularly when his personnel are not particularly adept at it.

“Too many times, it is laborious, stilted and looks like passing by numbers.

“Occasionally, it as though this defensive unit enjoys seat-of-the-pants moments.

“Bernd Leno sends a thankless ball to Sead Kolasinac one moment, the wing-back returns the favour the next.

“It is nice having a philosophy, even nicer having practitioners who can carry it out.”