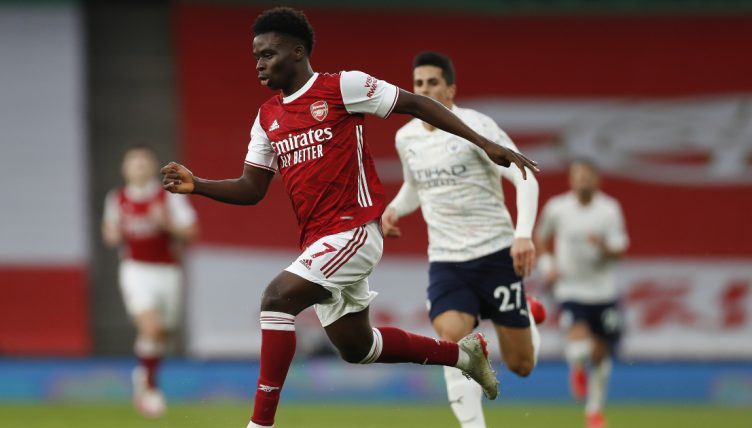 Bukayo Saka continues to go from strength-to-strength with Arsenal and he put in a match-winning performance to drag the Gunners into the last-16 of the Europa League on Thursday night.

After Benfica came from 1-0 down to lead 2-1 in Greece, it looked like it could be curtains for Mikel Arteta’s men, but goals from Kieran Tierney and a second of the night in the 89th minute from Pierre-Emerick Aubameyang sent them through.

But it was two excellent assists from Saka that caught the eye. The first, a perfectly weighted through-ball for Aubameyang, and the duo combined again for the winner, Saka this time whipping a pin-point cross to the back post for the 31-year-old to head home.

After his excellent display against Benfica, former Arsenal right-back Bacary Sagna could not resist taking to Twitter to sing his praises.

The French man made over 280 appearances for the Gunners before making the move to Manchester City. Now retired, though, he is happy to kick-back and watch the next generation tear it up.

There is no bigger cheerleader of Arsenal’s emerging talent than Ian Wright.

He has had plenty to say about Saka since his debut, but we think that the below video says it best and is just some excellent wholesome content.

“Do you know how much I love you, my friend?” Wright says to a grinning Saka.

“Nah I feel it,” he replies. Who’s chopping onions?

Ian Wright to Bukayo Saka is all of us right now 😄 #afc pic.twitter.com/NQzHS0nEWl

Like Sagna, Fabregas was also inspired to throw some praise Saka’s way after the Europa League win.

Taking to Twitter, the World Cup winner said: “Saka is such a good player. Such maturity and intelligence for his age. Game changer.”

Coming from a player that has really done it all, you have to assume this will mean a lot to Saka.

Saka is such a good player. Such a maturity and intelligence for his age. Game changer.

He may have left the Emirates in unsavoury style, but Van Persie clearly still has plenty of affection for his former side.

Saka particularly has caught his eye, comparing his January display against Southampton to none other than Dennis Bergkamp – particularly his assist for Alexander Lacazette.

Speaking as a pundit on BT Sport, the Dutchman said: “That type of pass is like from Ryan Giggs, Dennis Bergkamp, Paul Scholes. Ordering your striker to move into that danger zone, it’s world-class.

“This is not simple but he makes it look easy. Only the great players can make those passes. This is a pass with an idea, with intent, and this is what you want from your players.

“He’s really taken his chance and it’s nice to see a young kid really grab his chance. To play for his future and do it so well.”

Also speaking to BT Sport following the win against Southampton was Martin Keown.

He too was incredibly impressed with the Gunners’ youth graduate’s performance, but also how he has taken to first-team football in general and his professionalism. 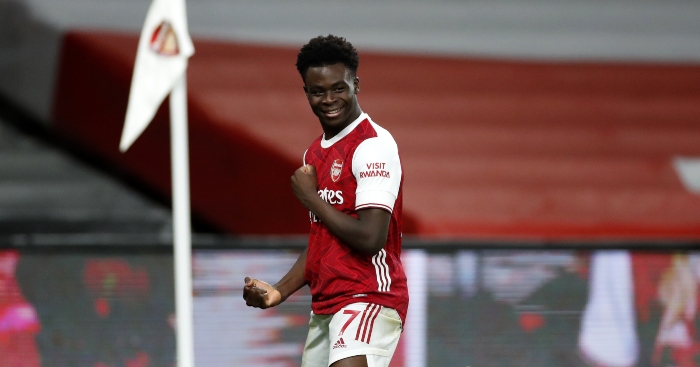 READ: Bukayo Saka remains a beacon of light amid the darkness at Arsenal

Ramsey may have made the move away from Arsenal but he clearly keeps abreast of goings-on at his former club.

In April 2020, he took to Instagram for a live Q&A and spoke in glowing terms about the versatile attacker.

“He’s been unbelievable this season with so many assists. He’s been creating so many chances and that too from a deeper position from where he bursts forward. He has had a great season so far.”

From one great Arsenal hope to another.

It feels like yesterday that Wilshere was being touted as the best thing to come through Arsenal’s academy in a generation. Now Saka is getting the same treatment.

But clearly, game recognises game. Taking to Twitter back in January, Wilshere called Saka the best player in the Gunners’ squad, and it is becoming very hard to argue with him.

Saka! What a player. https://t.co/D1cCPbrBfu

Traore himself was once tipped as a future Gunners’ great but admitted in an interview with Talksport that he made some bad choices which ultimately led to his downfall.

In the same conversation, he gave Saka advice on how to stay on the right path but also praised the youngster.

“I think he’s an unbelievable little player. He’s very exciting and I enjoy watching him play,” he said.

“The advice I would give him would be stay surrounded by good people because I’ve suffered a lot from that [and] I’ve made really bad choices in my career. If you’re not surrounded by the right people, you will go downhill from there.