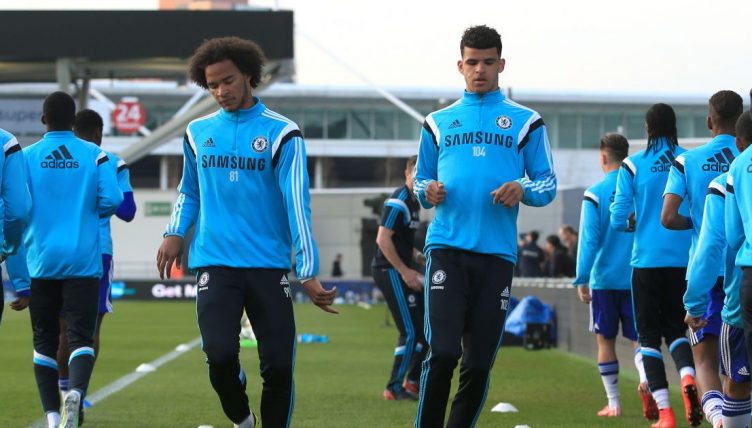 During his second spell as Chelsea manager, Jose Mourinho picked out three talented young players and tipped them for a bright future in the first team at Stamford Bridge and even for England.

“My conscience tells me that if, for example, Baker, Brown, and Solanke are not national team players in a few years, I should blame myself,” Mourinho said on Chelsea’s pre-season tour in 2014.

“They are part of a process the club started without me. At this moment, we have players who will be Chelsea players. And when they become Chelsea players, they will become England players, almost for sure.”

We’ve taken a look at how those three players have fared over the last eight years.

Baker was handed his first-team debut early in Mourinho’s second spell at the club, coming off the bench against Derby County in the FA Cup in January 2014.

The midfielder’s stunning strike against Arsenal Under-21s was voted Chelsea’s goal of the season in 2013-14, and he also won their Young Player of the Year award.

After a very brief spell at Sheffield Wednesday, he joined MK Dons in February 2015, playing alongside Dele Alli as they won promotion to the Championship.

Baker impressed throughout his two seasons on loan with Dutch side Vitesse Arnhem before returning to England with Middlesbrough, Marcelo Bielsa’s Leeds and Reading.

During his time at Fortuna Dusseldorf in 2019-20, he made just nine appearances, scored a comical own goal and was accused of going AWOL by the manager.

In 2020-21 came an eighth loan spell away from Stamford Bridge with Baker joining up with former Blues coach Eddie Newton at Turkish side Trabzonspor.

Newton was sacked after just nine games, but Baker went to play 34 games in the Super Lig before returning to Chelsea.

Unable to get a move in summer 2021, Baker was stuck twiddling his thumbs for the first half of 2021-22. But in January, he finally, finally – at the age of 26 – managed to get a permanent move away, signing for Stoke.

It’s going pretty well – Baker has knocked in 13 goals in 44 club appearances. He might never have added to that solitary Chelsea appearance, but he seems to have found a home.

Having made his Premier League debut at the age of 16 with West Brom, Brown was widely regarded as one of the best young prospects in English football.

The midfielder was then handed his Chelsea debut by Mourinho in May 2015, coming off the bench for the final 11 minutes of a 3–0 defeat at his former club West Brom.

Despite only making one appearance, Mourinho insisted Brown be given a winner’s medal for his contribution to Chelsea’s 2014-15 Premier League success.

He got his first taste of loan football at Vitesse in 2015-16 before playing an instrumental role in Huddersfield Town’s promotion to the Premier League in 2016-17.

The England Under-20 international got a Premier League loan with Brighton in 2017-18 but a serious knee problem slowed his development at senior level.

Brown then dropped back down to the Championship but barely played 15 minutes at Leeds before a hamstring injury curtailed his time at Luton Town.

He was a popular figure behind the scenes at Elland Road but looked like getting sent off in his first brief substitute appearance, and in his second he left his only abiding memory: shanking a last-minute free-kick in the play-off semi-final defeat to Derby.

Send him back to Chelsea

“Some people have been saying I’ve got glass ankles or something,” Brown said in September 2020. “It has been tough for me. I don’t know why the injuries have come along.

“The ACL was my first really big injury and I don’t know what has happened since then. Sometimes you go through that patch but I have been working hard and doing extra gym work. I have been seeing people away from football to make sure my body can stand up to a season of Championship football.

“I feel like this season I am ready to play 40 to 50 games and then hopefully people won’t be saying that anymore!”

He went for a final loan move to Sheffield Wednesday in 2020-21 and managed 19 league appearances before joining Preston on a permanent deal.

Yet before he could make his debut for the Lancashire side, those glass ankles shattered once more. Brown ruptured his Achilles, ruling him out for the season.

That Premier League debut for West Brom in 2013 must feel like a very, very, very long time ago.

After scoring 31 goals for Chelsea’s Under-18s and Under-23s during the 2014-15 season, Solanke seemed very much on the pathway to stardom.

He was awarded the inaugural Chelsea Academy Player of the Year award and also made his debut for the first team as a late substitute in a 6-0 win over Maribor in the Champions League.

The striker had his first loan spell at Vitesse and finished 2015-16 as their third-highest goalscorer with seven from 25 Eredivisie games.

He was then frozen out by the Blues in 2016-17 over a contract dispute and joined Liverpool on a free transfer in search of regular first-team football.

“I definitely wanted to break through but it got to a point where I just wanted to try and play,” Solanke told the Daily Telegraph in 2019. “People might think I was impatient but I was just a young boy who wanted to play football.”

Liverpool believed they’d pulled off a coup when he won the 2017 FIFA Under-20 World Cup with England and received the Golden Ball award as the best player in the tournament.

Unlike Baker and Brown, Solanke has actually made his senior England debut, coming off the bench against Brazil in November 2017.

But he failed to establish himself at Liverpool, scoring only once in 27 games before somehow being sold to Bournemouth for a reported £19million in January 2019.

The striker has an infamously poor Premier League goalscoring but found his feet in the Championship.

He managed 15 goals in his first season in the second tier and followed that up with 29 goals to win Bournemouth promotion. He’s even scored three in the Premier League this year.

READ NEXT: An amazing Xl of players Jose Mourinho has sold during his career

TRY A QUIZ: Can you name the Chelsea XI from their 4-2 victory over Barcelona in 2005?