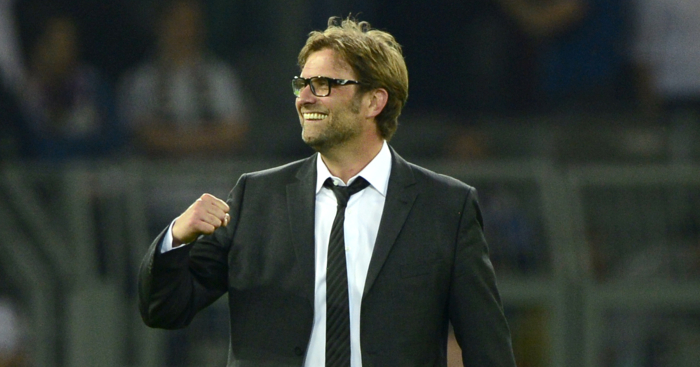 Jurgen Klopp faces a daunting task as he tries to mastermind a victory over Real Madrid in the Champions League – but Liverpool fans can take heart from the fact he has already done so in resounding fashion.

Liverpool face Real Madrid in Kiev on Saturday evening hoping to win their sixth European Cup against the most successful side in the history of the competition.

We’ve looked back at one of Klopp’s finest hours as a manager, Borussia Dortmund’s 4-1 victory over Real Madrid in the first leg of the 2013 semi-finals, to see if there is anything Liverpool can learn from that night.

An early example of how Liverpool will hope to hurt Madrid. Sven Bender snaps into a tackle to disposes his opposite number Sami Khedira and set Marco Reus free.

With open space in front of him, Reus is direct as his pace and trickery puts the defence on the back foot. Diego Lopez’s parry is just strong enough to prevent Robert Lewandowski from being left with a tap in.

“They’re all over them like a rash,” Gary Neville exclaims in the commentary box. “The energy in this performance and this start from Borussia Dortmund is incredible.”

The Bundesliga outfit never allow Madrid to settle and take the lead with less than 10 minutes on the clock.

It is striking that when Mario Gotze picks up the ball on the left flank and cuts inside, he has four yellow shirts in and around the box to aim at – a signal of Klopp’s intent from the off.

A German goalkeeper facing one of Cristiano Ronaldo’s dipping, swerving free-kicks? Just get it clear, Loris.

Raphael Varane is faced by Reus once again looking to be direct and attack the defence, leaving the centre-back incredibly uncomfortable as a big shout goes up for a penalty to be awarded – ultimately in vain.

Even so, that sound you can hear is Sadio Mane, Mohamed Salah and Robert Firmino licking their lips.

In what may the the coldest of takes: you really can’t afford to make mistakes against Real Madrid.

A poor touch from Mats Hummels allows Gonzalo Higuain to escape, and the striker picks out Ronaldo for a simple finish.

Madrid’s players are furious. They’re convinced Lewandowski is offside, and at first glance, the striker does seem to be suspiciously ahead of the back four.

But replays show Dortmund’s hitman was simply more alert than the opposition – Varane has been caught out again.

Now, does Klopp have anyone at his disposal who knows how to sniff out a goal for Liverpool?

There are times when football doesn’t seem to make sense; when it becomes a blur of limbs, ricochets and panic; when something just seems to be in the ether and logic disappears; when the atmosphere becomes so fevered that world-class players crumble and others begin to thrive.

Jose Mourinho’s Madrid are a mess at the back, Luka Modric – one of the most composed footballers in the world – fluffs a simple clearance, but Lewandowski and Dortmund are punishing every opportunity which comes their way.

“Emphatic is not the word for Lewandowski,” Nev gushes.

Such is the constant pressure of Dortmund’s forward runners from all over the pitch, Madrid’s players are dragged into all sorts of uncomfortable positions, with the spot-kick awarded when Xabi Alonso gets on the wrong side of Reus after struggling to play catch up as the attacker ghosted into the box.

The penalty itself is converted with aplomb, a 12-yard atomic bomb exploding with the adrenaline and intensity surging through such a performance.

Neither mentally nor physically, there is no way of a team maintaining such a display over the course of 90 minutes, never mind a whole season, but there is an alchemy in how Klopp inspires these brief periods of utter dominance which leave teams suffering from PTSD.

Whether he manages to do so when Liverpool take to the field in Kiev remains the big question.