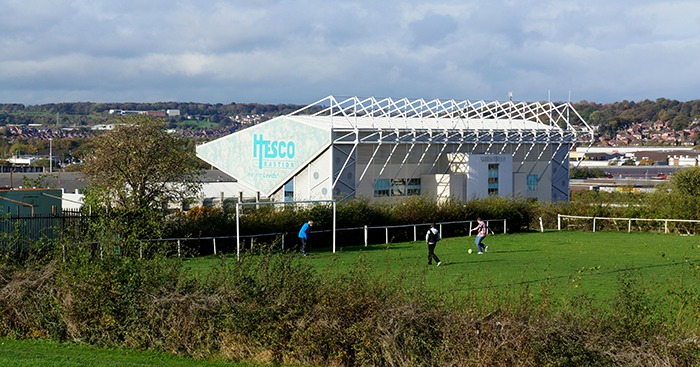 Leeds United is a big club. Potentially an enormous club. But you won’t find too many tourists at Elland Road on a Saturday afternoon. This is a big club with a difference.

We are stepping into unchartered territory folks, for its time for this gallery to leave the relative comfort of the Premier League. Unfortunately, no parachute payment appears to have yet landed here at This Is My Love HQ. Obviously they are lost in the post.

This month it’s time to visit Yorkshire, a county teeming with big football clubs. But while the fine men of Huddersfield Town, Sheffield United and even Hull City have lit up the top flight since our subject’s relegation, when you think of Yorkshire football, there is one name above all others. Usually, they’ll shout it at you three times….Leeds! Leeds! Leeds! 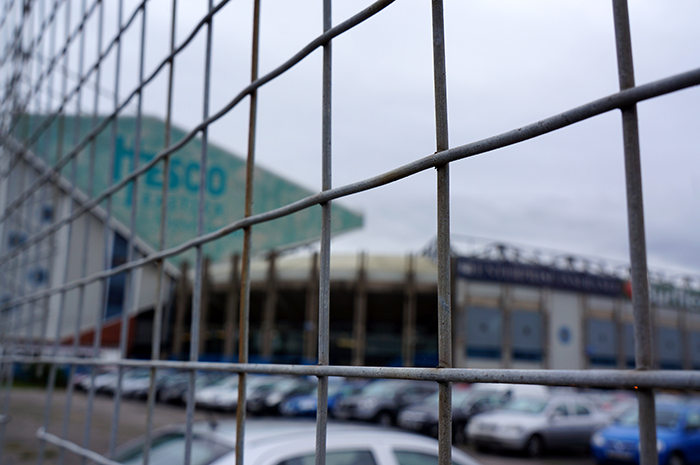 Time to set the scene. As you drop off the Pennine moors heading east, Elland Road sits there in the valley among the industrial units of Beeston, just off the M621 motorway that will lead you into the city’s one-way systems. You can park your car with relative ease.

Feel assured that there is no club hyper-store or museum here. This is a proper football ground. Imposing, functional and on three sides at least, largely unchanged since this outfit’s first halcyon days under a certain Don Revie in the early 70s.

The fourth side is pure 90s pomp, right down to the club themed McDonalds that sits behind it. The largest cantilever stand in Europe once upon a time. A perfect back drop to that other stonking statement of 90s-ness:

This lot have been top of the pile three times in their history. I remember the second era (and those midfield names, in that order) with great affection. The facilities still give you a fantastic insight into the first. That said, I had to try harder than I ever imagined to find the man behind it all… 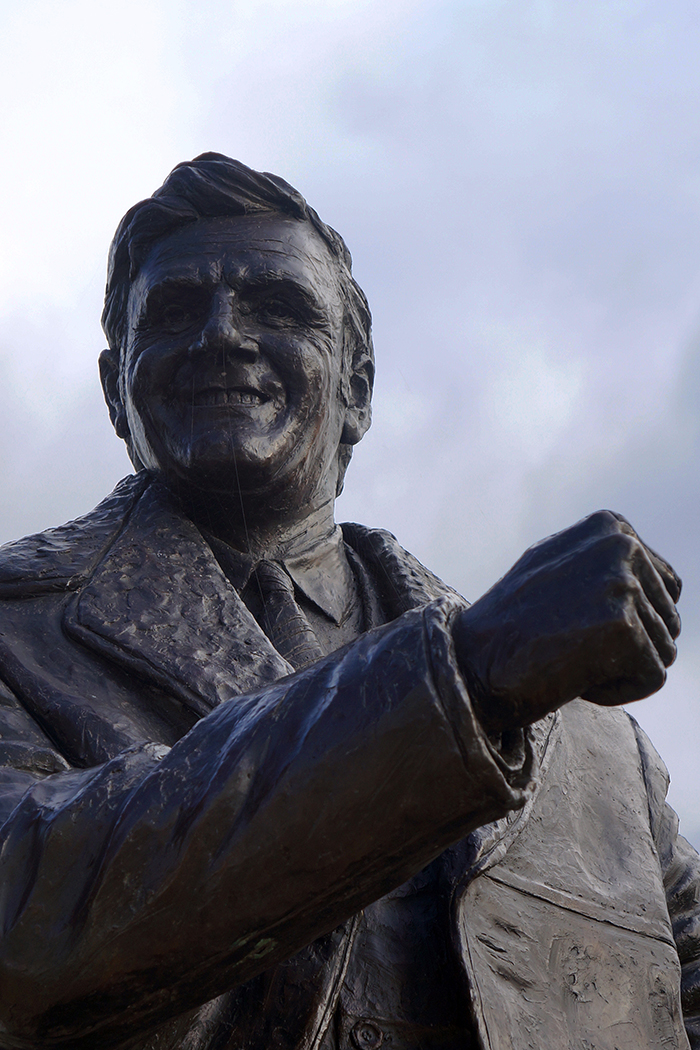 If you go to the big football clubs of this isle – and I include Leeds United in that bracket – then you’ll see tribute to the great club builders. Immortalised in bronze, they’ll stare back at you from a plinth in a prominent spot. Shankly, Busby, Ferguson, Clough (x3), Stein, Chapman, Ramsay, Sir Robert William Robson.

Its accepted wisdom that the men off the field who take the ordinary football club and make it extra-ordinary are permitted to live forever in full view of the generations that follow.

At Leeds, just on the corner of Elland Road is not the architect, but the master bricklayer. Club captain of Don Revie’s great side, Billy Bremner, takes pride of place at Elland Road.

So where’s Mr Revie then? Keep walking, down off the main road and then look for a gap in the hedge on your right. Keep looking. Then you’ll find him.

Maybe I’m reading too much into it but I did think it was very Yorkshire. You play well for this football club and you’ll earn your place in their hearts: On. The. Pitch. Put Revie’s statue where you want though, what he achieved right here in the late 60s and early 70s was nothing short of exceptional. 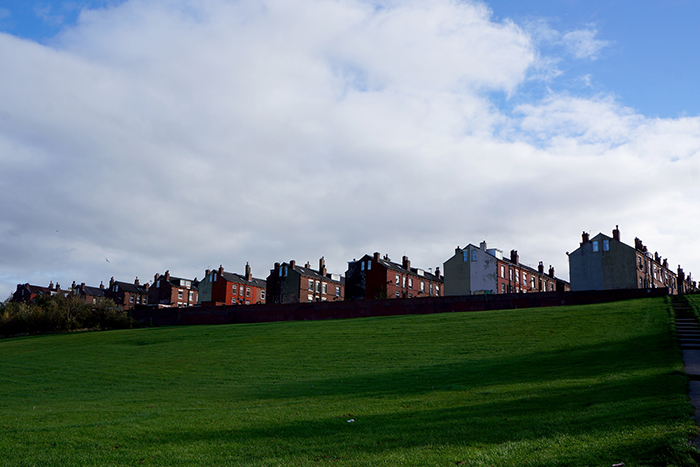 Revie’s achievements are exceptional because this is Leeds. Beautiful in my eyes, it’s a working class city full of good, honest, working class folk. This photograph was taken just up the Beeston Hill behind the ground.

Revie as a player was a superstar. He was the subject of the ‘Revie plan’ – a whole formation in which he was the main man. A striker who dropped deep and won the ball ‘in the hole’. These days they would call him a No.10. A first. A visionary.

As a manager he was nothing less. Harnessing the support of those who worked and played in these streets to take their football club to the very top. They hadn’t been there before, in fact, until Revie they were quite mediocre. 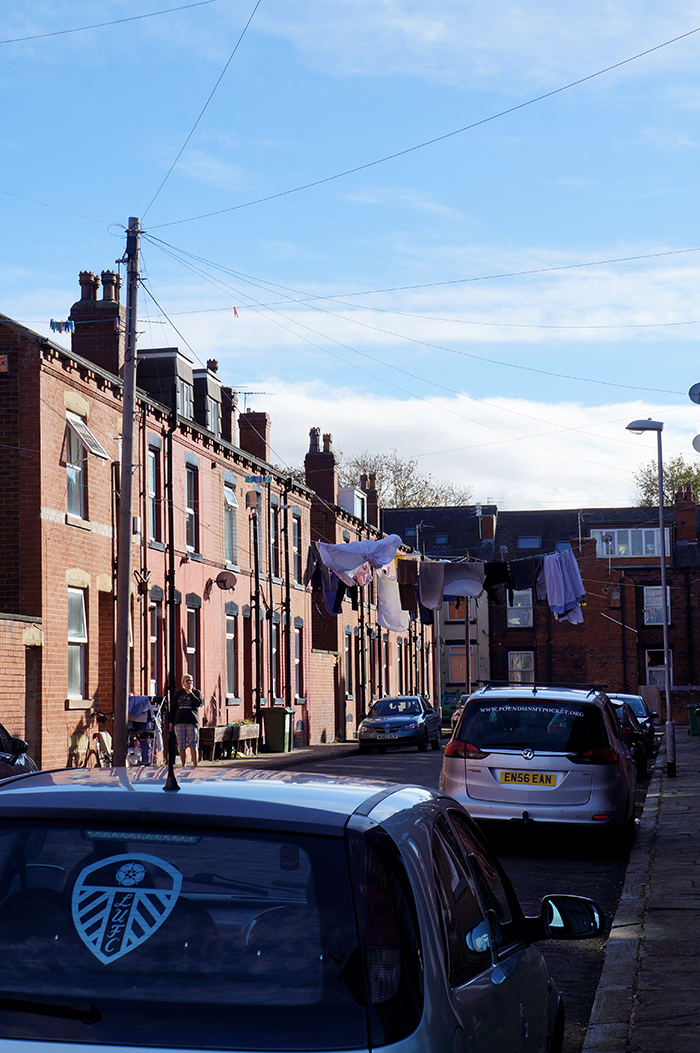 Not much digging is required to see the potential though. Everton & Liverpool? City & United? No. Leeds and Leeds. This is a one club city. In fact, if you talk to the locals the biggest challenge for their affection seems to be their desire to watch rugby league.

Car stickers, shirts, bunting, posters and flags. Only yellow, blue and white is allowed to fly round these parts. 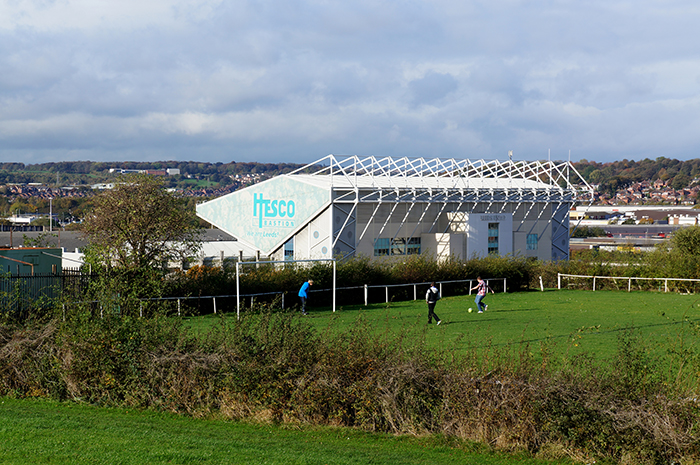 And the walk back down Beeston Hill is one of the great approaches to a football ground anywhere in the world. On a sunny day in August you’ll feel the heat hit you as you come out of the shadows of the terraces behind. You’ll smell nothing but freshly cut grass and new nylon shirts. Below you will be that there 90s cantilever shimmering in the heat. You’ll maybe hear a click of a turnstile or a tester’s blast on the PA system.

Kids will play on the pitch to your right, enjoying the most inspiring backdrop in the whole city. So inspiring that they used this very spot as the training ground of Derby County in ‘The Damned United’ (just before the FA Cup game against Leeds ironically).

Those set finders knew a football landscape when they saw one. 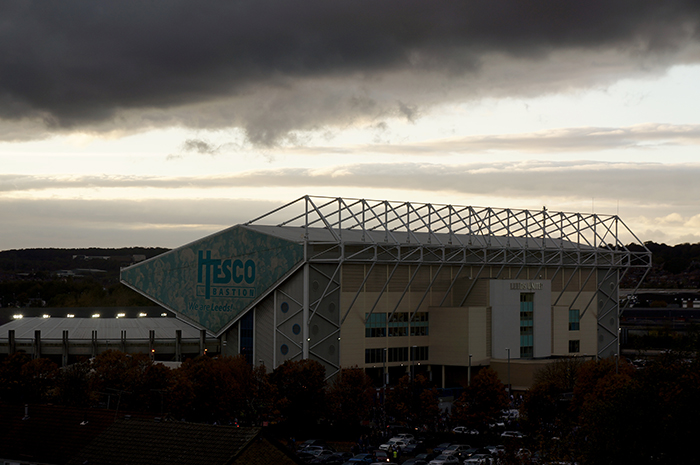 But this is Leeds United and it isn’t always August. For every child who grew up with Eddie Gray or Tony Yeboah on their bedroom wall, there’s another who would be forgiven for thinking his club’s full name was ‘Crisis club Leeds’.

Storm clouds never seem far away at this football club. I watched wide eyed as this proud old club stormed to the Champions League semi-finals in 2001, frightening the life out of AC Milan and Lazio as they went. Was revenge for 1975 on the cards? (If you know, you know).

I watched even more wide-eyed as they tumbled out the top flight three years later in financial armageddon.

I wondered at one point if there would still be a football club left in that valley. League One came and went.

Leeds United certainly test those who walk down this hill once a fortnight. 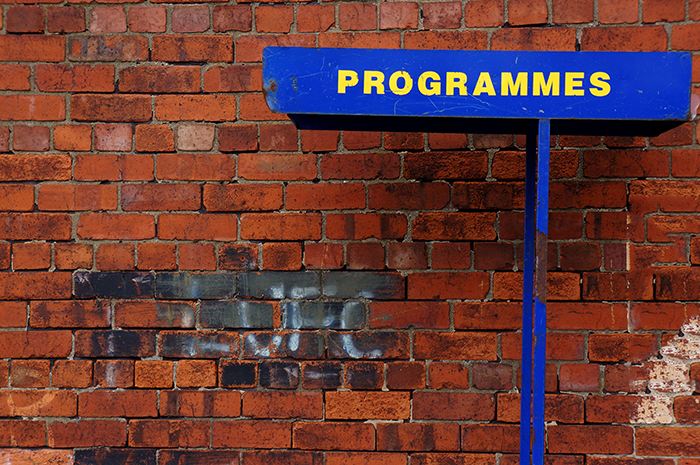 And that appears to be the crux of Leeds United. They seem to do incredible highs and epic lows in equal measure.

There is a beauty to the slightly rundown nature of Elland Road and a mystery to the inner workings of this football club, in good times and bad.

Football graffiti is often a barometer to the mood of the public. Nothing wrong with this old fashioned number….timeless and atmospheric.

(8) The ghost of Leeds United past 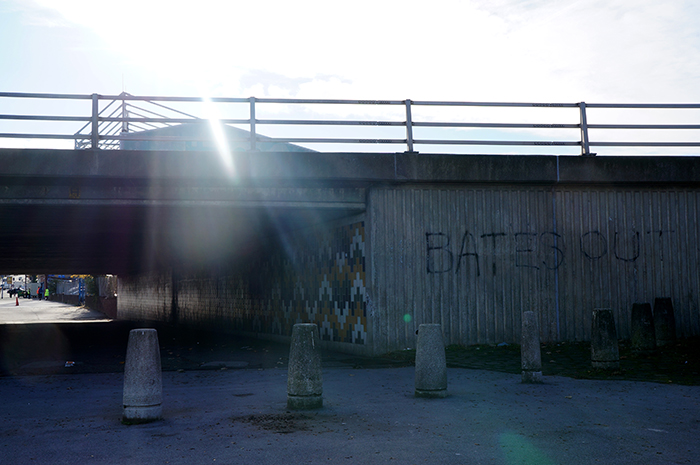 …but sometimes the word of the people is very much within its time. Standing as a warning forever.

Light and Dark. Up and down. Feast and Famine. Leeds all over.

Thankfully, it’s out with the old and in with the new around Elland Road these days, and this spot is about to look quite different.

Great progress being made on the Lowfields Road mural! 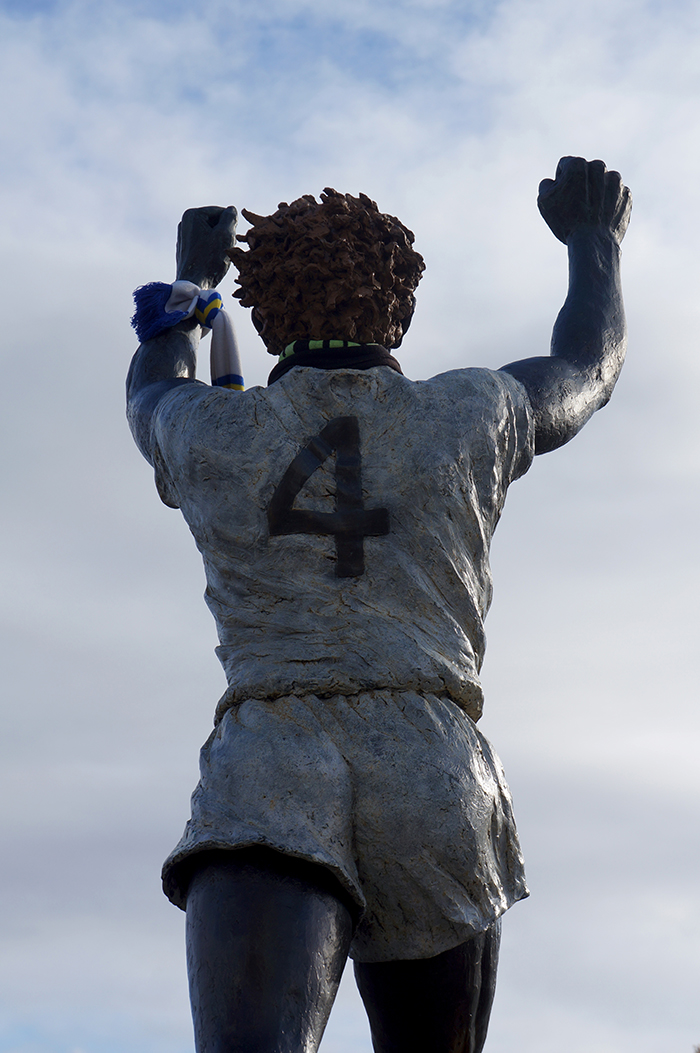 I’ll meet you at Bremner. The statue we mentioned before. A top notch effort and a focal point for all.

Hands aloft, eyes to the sky. I’ve always thought he should have a trophy in his hand, just to finish him off. The 1972 FA Cup perhaps? 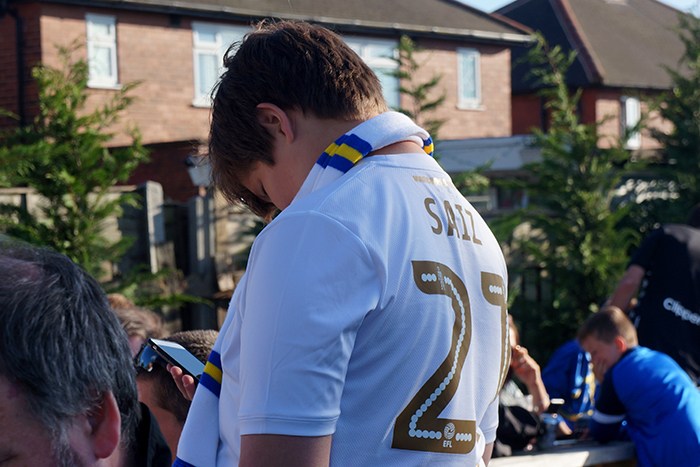 And then on to the Old Peacock. The beer garden allows you the chance to gauge the matchday mood. New names on new shirts. Who would have thought a Carabao Cup hat-trick against Port Vale would mean so much for a young man?

On. The. Pitch. It feels like the Leeds way. 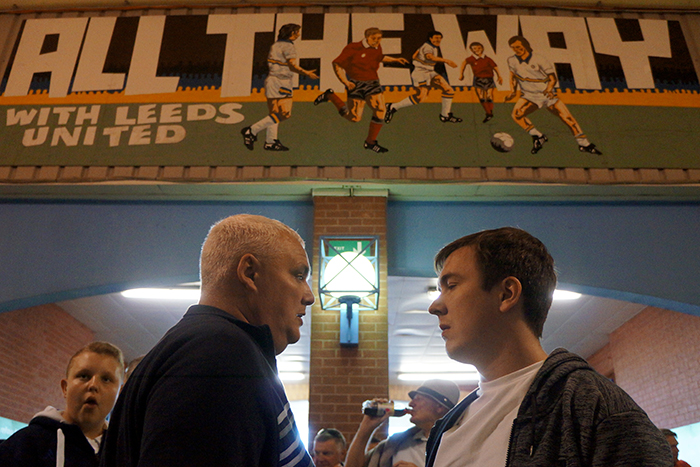 And into the ground we go. Time for this father and son to follow their own match day rituals from hereon. “All The Way” says the sign. The 90s still in vogue it would appear. 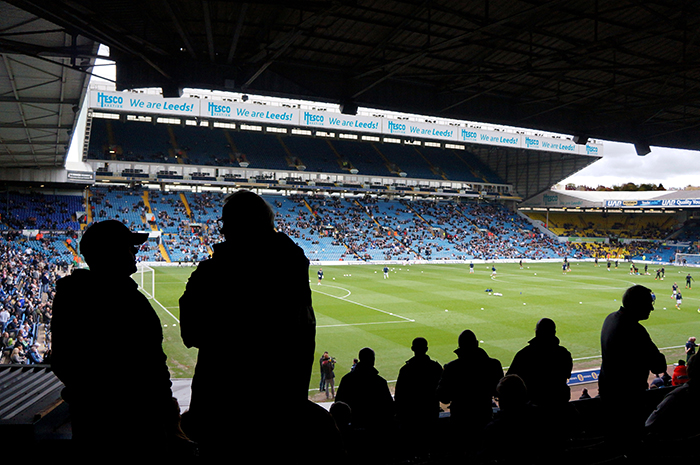 And some of those fathers go to the back of the John Charles stand. Wooden seats and an asbestos roof. Slightly quieter back here and unchanged since the days of Revie.

Let the young ‘uns have the Kop and keep the songs up. We’re alright up here, lads. 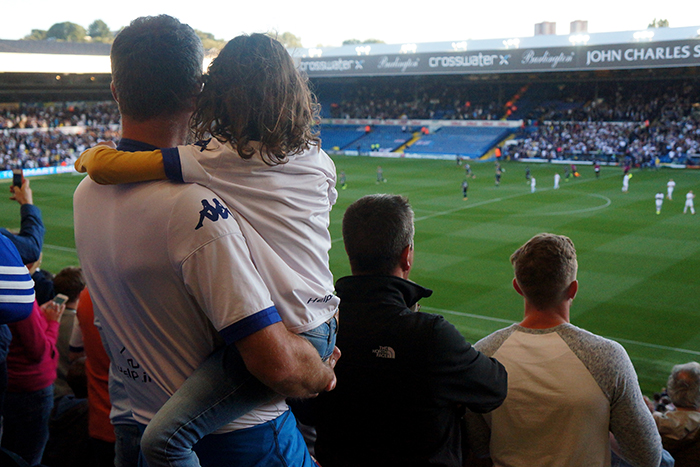 Some fathers still have work to do before they can retire to the back of the old stand. You visit this football club and you see it’s a way of life for many.

This dad held his daughter high as the club anthem played out. Marching On Together. It meant something. A constant. A song she’ll hear at Elland Road, stood next to her dad, for the rest of her life. 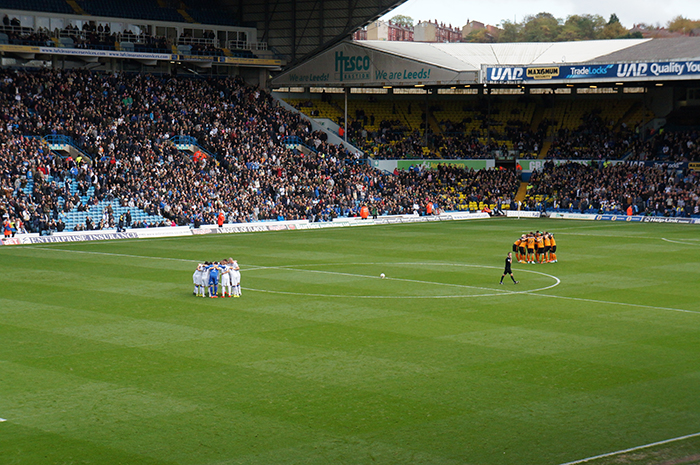 And as the anthem played, the players huddled. The enduring sight in modern football of two teams making one final statement of togetherness before the whistle blows. Beeston Hill sits proudly above the ground.

For Leeds. For the People. 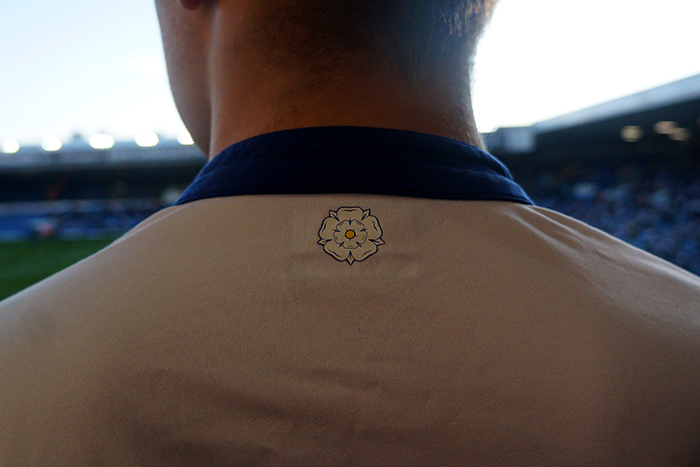 Because we’re all Leeds, aren’t we? 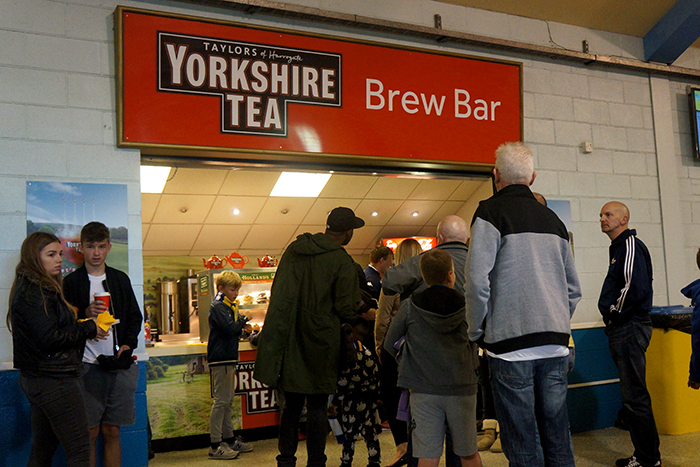 Stop. Half time. Brew. This is Yorkshire. Do not disturb. No time for any of that bloody romantic writing here young man. 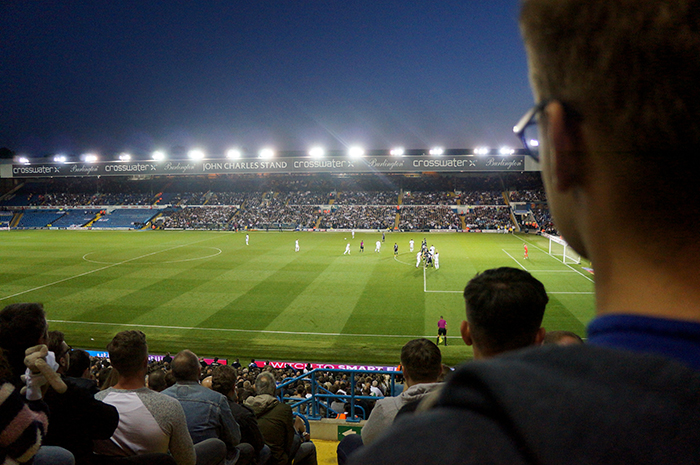 Brew finished. Get back to it, ahem, the sun sets, blues, and reds and oranges fade slowly to black. It’s the natural back drop for a great footballing moment. One that we will remember for years to come. 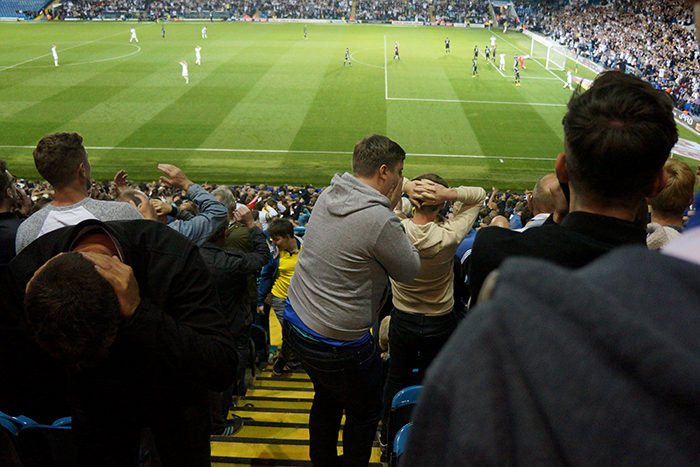 But this is Leeds United. You know the drill by now. Sometimes the high point arrives when you least expect it.

Other times Chris Wood puts a sitter past the post when you’ve got your finger on the shutter and the only photo you get is everybody holding their head wondering quite how he missed. 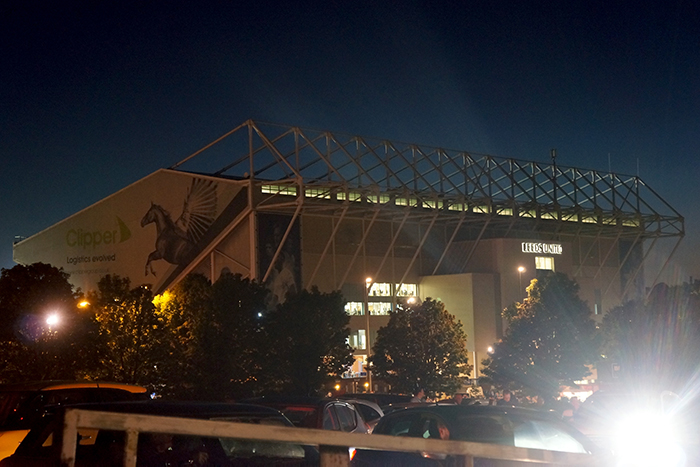 And with that Wood miss came the final whistle on my last visit to this enigmatically wonderful football club. One last walk to Beeston Hill to take in one last shot.

The cars get your attention at Elland Road. There is no train station nearby and the buses into town take forever. If I didn’t know he was from South Shields I would swear this was where Ridley Scott dreamt up Blade Runner. All neon lights and pitch black skies.

It all creates an Elland Road that is as atmospheric at night as it is during the day. Industrial and functional, it keeps its magic inside its four walls. 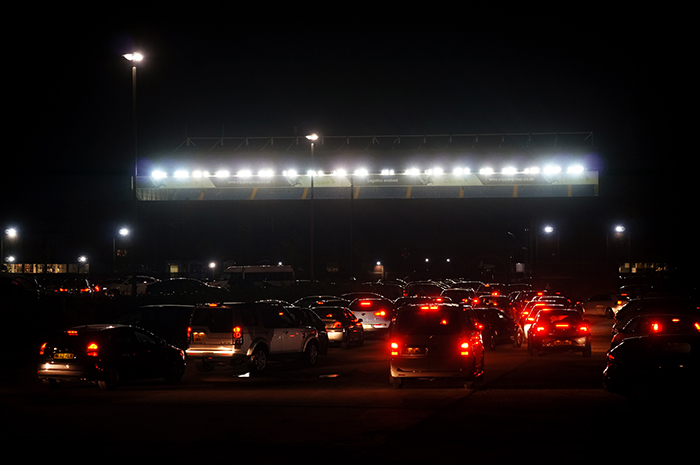 As you walk away just consider this place one last time. Light pours out of the cantilever, built deliberately higher than its older neighbour. The cars keep coming out of every possible nook and cranny of every industrial estate around.

Then think that in the last 20 years you could have walked home from a Champions League semi-final or wondering if your club would still be in business next week.

Then, among the ordinary, looking at the floodlights, listening to the voices and stumbling on some graffiti, maybe you’ll just fall a little bit in love with Leeds United. 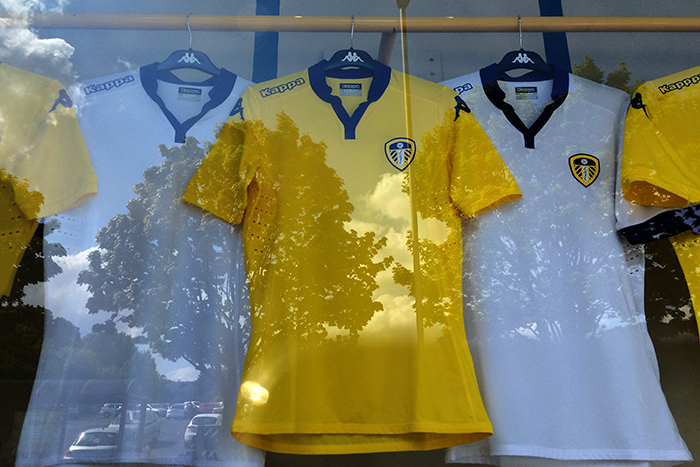 I can’t finish in a car park after a 0-0 versus Fulham though. Here at This Is My Love we tell stories, but only when they have a happy ending. So dream of Europe and of Beeston Hill in August, of floodlights in the distance and of Strachan, McAllister, Batty & Speed.

And enjoy this photo taken on one of those sunny days at Elland Road full of hope, new kits and frighteningly loud renditions of Marching on Together.

Leeds United What Makes A Club