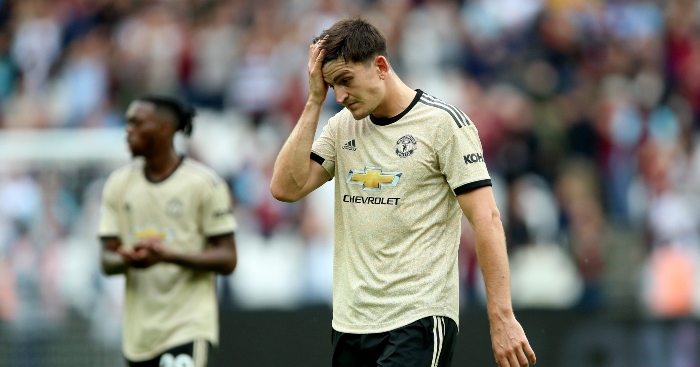 Manchester United fell to a limp 2-0 defeat to West Ham United on Sunday, leaving them eighth in the Premier League and 10 points adrift of leaders Liverpool after six games.

United’s struggles are nothing new – they were similarly off the pace when José Mourinho was dismissed last December – but things aren’t looking great for fans of the 20-time title winners.

Supporters aren’t the only ones running the rule over Ole Gunnar Solskjær’s squad, though. Here’s what those paid to give their opinions are saying.

“I think they are going to really, really be in trouble to get not just into the top four but potentially the top six. And this with a sad voice and a sad feeling that I say this. I think that this team is worse than the team of last season.”

"Last pre-season I was crying for a centre-defender!" 🤣

Jose Mourinho and Roy Keane agree that Manchester United 'had' to buy Harry Maguire but say there is no doubt he improves their defence.

“You can lose a game of football but everything about them… they were lacklustre, no quality, lack of desire, lack of leaders, lack of characters. It’s a long way back for United but scary how far they’ve fallen.”

‘I shouldn’t be surprised. This team is not ready. There will be lots of pain and it was painful today. They were lethargic. When you let games drift and pass by, other teams gain confidence”

“What is clear is that if Solskjær truly believes United were let down only by their decision-making, the club have problems.”

“The average age of Solskjaer’s Premier League XIs this season is 25 tears and 123 days – 22 days young than Sir Alex Ferguson’s 1995-96 Double winners. The difference is Ferguson had Eric Cantona and Andy Cole up top: Solskjaer clearly lacks those players of that quality and character.”

“Admitting “quality” is an issue at a club that has spent nearly £900 million on new signings since Sir Alex Ferguson left six years ago is a damning indictment on recruitment and also a signal of the length of time required for Solskjær’s attempted – much-needed – reboot to work.”

“Where do United’s problems begin? What happens on the pitch is merely a symptom of wider issues at a club. But the field of play is where you start and work backwards to find the root of the malaise.”

0 – Since winning each of his first nine away games as Man Utd manager in all competitions, Ole Gunnar Solskjær has seen his side fail to win any of his most recent such nine matches. Homesick. pic.twitter.com/YdjamGLbna

“The club’s descent from title challengers to Europa League maybes has been painful for United fans to watch and recent performances have done little to suggest this is a team capable of achieving anything more than the bare minimum. More worrying is what does the minimum even look like for 2019/20 Manchester United? Why are they worse than last season?”