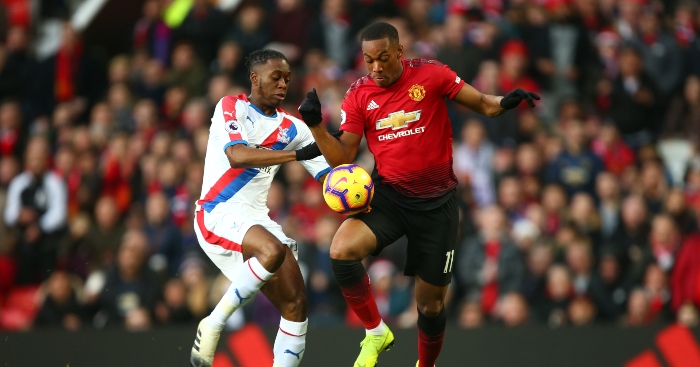 Aaron Wan-Bissaka is set to join Manchester United from Crystal Palace in a deal worth up to £50million.

After established himself as one of the brightest prospects in the Premier League over the past 18 months, Wan-Bissaka will make the step up to Old Trafford as Ole Gunnar Solskjaer attempts to refresh his Red Devils squad.

We’ve taken a look at what fellow players, pundits and managers have said about the 21-year-old right-back.

If anyone knows anything about being a Manchester United right-back, it’s Gary Neville – and the former England international approved of the move in the Evening Standard.

“He’s a massive talent and the club, to be fair, have always signed young, emerging British talent. I don’t think that should change and it would seem to me that the club would like to go back down that route and he is one.

“Leicester will be the same for Chilwell and Maguire or Maddison. All these mid-tier clubs won’t let players go for £5m, £6m, £8m, £10m now.”

Wan-Bissaka took Ward’s place at Crystal Palace, reducing the 29-year-old to just seven Premier League appearances in 2018-19. Yet even Ward can’t help but praise the youngster.

“Aaron has been phenomenal,” he said. “For Aaron to come in and do what he’s done, he is like a seasoned pro already, not like a young lad who is a little nervy here and there.

“He has made the position his and it is fantastic what he has done.”

“He’s been very good, there’s no doubt about that and the fact is that we have no influence on their voting so of course they got it right. He’s had a very, very good season,” Hodgson told Crystal Palace’s official website.

“I don’t think he’s the only player [who has enjoyed a good season]. There are quite a few players in our team who can stand up and say it’s been a very good season for Crystal Palace and we’ve played our part.”

To be fair to Roy, the Palace boss has been full of praise for Wan-Bissaka on previous occasions, as these tweets from Gary Taphouse – with his name like a Vic and Bob character – show.

Hodgson: "He actually made a mistake in the 94th minute and I was relieved because I was starting to think he might be a robot."

The former Crystal Palace favourite has refuted any notion Manchester United are overpaying for Wan-Bissaka.

“Listen, let me tell you something, the kid has got all the attributes to be one of the best right-backs in Europe,” Morrison told talkSPORT.

“No chance. Once you think you’ve got past him, he gets his daddy long legs and he manages to win it back. He’s one of the best I’ve ever seen in a one-on-one defending situation.”

Emery was asked for his opinion on Wan-Bissaka and Palace team-mate Wilfried Zaha and gave a glowing reference for the duo.

“They are two very good players,” he said of Zaha and Wan-Bissaka. “They are improving a lot and giving Palace a big performance for their success.”

Speaking of Zaha, the Palace star was effusive in his praise for his team-mate in a club doccumentary about the rise of Wan-Bissaka.

“I was kind of shocked by how good he was when I played against him,” Zaha said.

“I’ve played against a few decent right-backs, to be honest, and he’s one of them. You may go past him, but he always manages to get a last-ditch tackle in.

“I don’t understand how you go from a winger to a right-back because he’s so good at defending, but I think that’s his natural position.”

Zaha added: “Unless you speak to him, he will not say a word. Literally, he’s in the changing room quiet. But he does his speaking on the pitch, really. That’s why everyone likes him. He doesn’t chirp up much.

“He just comes in, does what he has to do, plays his game, plays well and goes home. The games he’s come in, the players he’s played against, I was kinda shocked because it’s just like, ‘Oh, he’s playing against Sanchez today.’

“He just deals with it casually. I like his mentality. That’s how I am when I go on the pitch, no matter what kit you’re wearing, I will not fear your team because of what you’re wearing, I’ll play the same way.

“And that’s what I feel he does, he’ll take on whoever, he’ll tackle whoever, and that’s why I rate him as much as I do.”

Not everyone has been so positive about Wan-Bissaka, with Danny Mills expressing reservations about a deal in which he says United are “buying potential”.

“Of course, things can go wrong,” he told Love Sport Radio. “You try and do as much due diligence as you can, watch as many of his games as possible, find out about his character, what he’s like.

“As they’ve seen with Alexis Sanchez through ludicrous wages, it does become a gamble.

“But this is the stage that United have got themselves into – having to pay over the odds for young players because they’re in a desperate situation.”

Who’d have have thought a former Leeds United and Manchester City defender wouldn’t be as keen on a Manchester United signing?

Transfer window starting to hot up. I like Wan-Bissaka defensively but he’ll need to improve on the ball and going forward to justify the huge fee. I’d expect the finished article for that money.

While some onlookers have questioned Wan-Bissaka’s defensive capabilities, former Arsenal and England striker Mariner has instead praised that area of his game.

“He gets up and down very well, he defends very well which is something that we don’t see too often nowadays. He likes to defend, he closes the ball down.

“To me he’s one of the better right-backs that Manchester United could go after. If he’s available I say go after him.”

Reflecting on his maiden year of first-team football in December, the man himself admitted his own surprise about how quickly things have developed.

“It started with the chance I was given to play in the Premier League,” Wan-Bissaka told Crystal Palace’s official website.

“I was shocked when it happened, but it was a chance I had to take, and I feel I’ve taken it.

“It started on the Friday I went into the Analysis room, and checked the board – and my name wasn’t on the bench. I looked up and saw it in the right-back position. I was shocked, nerves kicked in. I was playing against Tottenham the next day.

“It’s a big thing for me, Palace are my local team. I aim to build a future with this team and to see where it takes us.”

Well, maybe not the last bit.