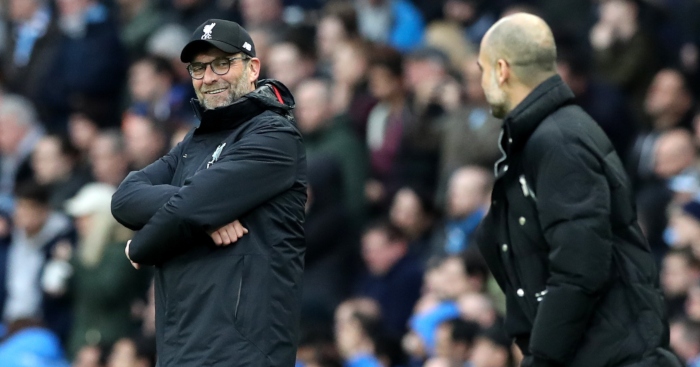 The title race between Manchester City and Liverpool will be decided on the final day of the season – and it’s fair to say both clubs have made an impression on the other team’s managers.

With 178 goals between them with a game to play and third-placed Chelsea more than 20 points off their incredible pace, no other teams have come close.

We’ve looked back at what their rival Premier League managers have said about this season’s stand-out teams.

Unai Emery on City: “They showed their superiority in 90 minutes. They held their level in 90 minutes and our level in the second half was worse than the first. Today showed the difference between City and us, and our challenge now is working and improving.”

Eddie Howe on City: “You have to know what you are doing and especially against players like Sergio Aguero, Kevin De Bruyne and Bernardo Silva. If you make one wrong move, you are going to get punished. Great credit goes to those players.”

Eddie Howe on Liverpool: “We played a very good team today – one of the best in Europe – and they are showing that.”

Chris Hughton on Liverpool: “These are the best team in the country.”

Sean Dyche on Liverpool: “You cannot give a team like Liverpool four goals – we certainly gave them three. You can question the errors, but we certainly made a game of it.”

Neil Warnock on City: “It was a long afternoon. I thought we started well. The first 30 minutes, we had shape and knew what we were doing, but the goals killed us. I’ve not seen our heads go down like that.”

Neil Warnock on Liverpool: “They are a good side, aren’t they? There’s not a weakness in their team or even the bench. It’s a fabulous Premier League title race because both sides are unbelievable.”

Maurizio Sarri on City: “The goal after three minutes made it very difficult to play against these opponents, who played fantastic football.”

Maurizio Sarri on Liverpool: “Liverpool are one of the best teams in Europe at this moment. We were a little bit unlucky for the second goal for the timing of it, but Mo Salah is outstanding, it was a wonderful goal.”

Roy Hodgson on City: “Keeping a ball and stopping them from playing around you…we did the best job we could. Had we gone hell for leather then they would have gone behind and around us.”

Marco Silva on City: “Against these teams, if you are not effective with one big chance, and concede from your first big mistake, it is more difficult.”

Marco Silva on Liverpool: “When I managed my first Liverpool derby in December what I felt was a special match for both teams. They celebrated that lucky goal, that lucky moment they had in the last seconds of the match, like it was a final of a World Cup for us and to them. The way they celebrated was more or less the same.”

Scott Parker on City: “You need to be brave against this team. It’s the only way you can put a stamp on the game.”

Scott Parker on Liverpool: “We played against the best counter-attacking team in Europe, a front three which are pretty deadly.”

David Wagner on City: “We faced a City side absolutely on it. They were different class and we were second best and that is why we conceded this defeat.”

Jan Siewart on Liverpool: “No-one expected us to be brave and we could easily have put on our helmets and sit on the back foot but we put them under pressure. This is how I want to continue with my work because I know it will deliver results. Jurgen Klopp has proved that at Liverpool where he came in and changed the system. We all knew they could punish us, but I am proud of the way we created chances.”

Brendan Rodgers on City: “Our motivation was to come in for our own development and performance. We pushed City, arguably the best team in Europe, right to the very end.”

Claude Puel on Liverpool: “We played a good team, of course. They put us under pressure in the first half. We lost a lot of balls, we recovered some balls well. We lacked the good pass, the good tempo. That was a shame.”

Ole Gunnar Solskjaer on City: “They are the best team in the country. They have set the standard in the last two seasons and I don’t know how many points they’ve taken. What Pep Guardiola has done with his players is remarkable and we are so close to it – in the vicinity – so we feel it every day.”

Ole Gunnar Solskjaer on Liverpool: “Liverpool dominated possession, but we had the biggest chances. It wasn’t a case of them not wanting to win the game, we defended so well.”

Rafa Benitez on City: “Give credit to the players because it was a great effort from everyone, to win against a team as good as Manchester City who have everything. They are so good, so when you do get three points against them you know the players have done really well.”

Rafa Benitez on Liverpool: “They [Liverpool] are a little bit different [to Man City], but they control games, they’re physically very strong, they have the pace and the ability and quality to play one vs one, long passes; whatever they want to do, they can do, because they’re a very good team.”

Ralph Hasenhuttl on City: “I think in the first 20 minutes Manchester City showed how strong they are. Their pressing was amazing, but we showed character and our mentality in that period of the game.”

Ralph Hasenhuttl on Liverpool: “It was a deserved win for Liverpool who tried everything, but we showed once again we fight for everything and we made for 80 minutes a very good game against a very good team.”

Mauricio Pochettino on City: “City are a very, very good team and it’s going to be tough, the games against him [Pep]… sorry, them.”

Mauricio Pochettino on Liverpool: “It is not easy to come here and dominate them. After the first half we conceded a goal when there was not too much happening in the game. That was tough for us, but in the second half we started playing with a lot of confidence.”

Javi Gracia on City: “I am very proud of the efforts of my players as it’s very difficult to compete against these teams, especially when you are losing. They are really dangerous with more spaces when we try to press higher.”

Javi Gracia on Liverpool: “After we conceded one early goal, then it was very difficult for us to compete. We tried, in some moments we created some chances but they dominated the game, they created more chances.”

Manuel Pellegrini on City: “We know that Man City have many different moments in attacking and they have players who make the difference, but we worked well in that sense.”

Manuel Pellegrini on Liverpool: “Klopp is used to winning with offside goals. He beat me against Malaga with a goal seven metres offside – so he cannot complain about anything.”

Nuno Espírito Santo on City: “I admire the talent they have. As a team, as a squad, as individuals; the team is full of talent, they are one of the best teams in the world.”

Nuno Espírito Santo on Liverpool: “The boys worked very hard and it’s difficult to play against Liverpool, especially when they’re in front. We deserved one goal at least.”