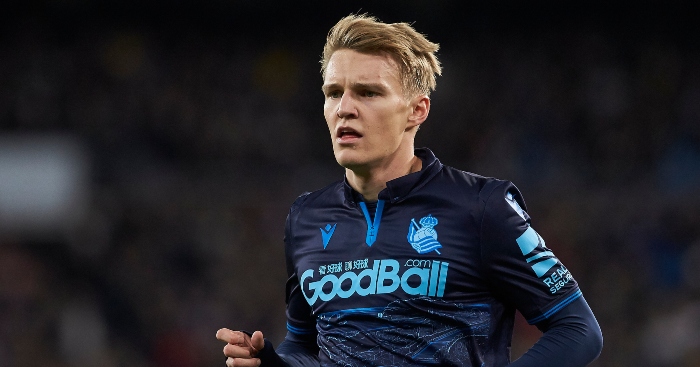 As Gareth Bale seems to draw closer to a Real Madrid exit, a space is opening up for Martin Odegaard. And the Norwegian has been using a loan spell at Real Sociedad to put forward a fantastic audition.

It’s now nearly five years since Odegaard moved to Madrid as a teenager, and his last performance – against Los Blancos for loan side Real Sociedad – only added to the hype to let him add to his 32 La Liga minutes in a Real Madrid shirt.

Here’s what players, coaches and journalists have been saying about him as the clamour for a return to the Spanish capital gathers pace.

“Since the beginning of the season he’s looked good, contributing a lot to the team. We’re not going to talk about the future.”

“He has a great potential, and he is one of the most technical players that I ever seen. With more experience, I think that he can be a really, really class player.”

“Odegaard, a playmaker with a sublime touch and a wonderful sense of vision, is about as far from the Norwegian stereotype as is imaginable.”

“Almost everyone overreacted to Ødegaard’s failure to reach superstar status as a teenager. Real Madrid, thankfully, did not. As a result, they might have a perfect Modric replacement waiting in the wings without spending a dime in the transfer market.”

“The Norwegian is in the best moment of his young career, leading a team that play the best football in LaLiga Santander.”

“I was watching him in the warm-up and … yeah, wow. Then the match started and after ten minutes, I knew. I texted my friend in England and said, ‘This kid is the real deal’.”

“If he keeps this up throughout the season, Ødegaard will make a case to be a regular member of Madrid’s first team squad that will be difficult to ignore.”

“People wanted to give him the ball and he does things when he has the ball.”

“He can eventually play at the best clubs in the world. But he has to develop further.”

Martin Ødegaard for Vitesse in the 2018-19 Eredivisie:

“I feel I’m playing like more of an adult now. I feel like I’m creating more, running more, feeling stronger on the pitch, and I feel like it’s part of growing up.”