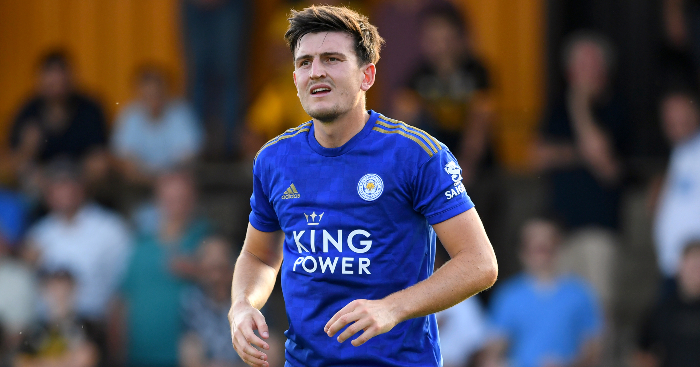 Manchester United have finally got their man after announcing the signing of Harry Maguire from Leicester City on Monday afternoon.

The reported £80million fee has made the England international centre-half the most expensive defender of all-time, eclipsing Liverpool’s £75million move for Virgil van Dijk in 2018.

And we’ve put together what various pundits and former players have said about the defender, including those that know him best.

“Harry is one of the best centre-backs in the game today and I am delighted we have secured his signature,” Maguire’s new boss told the club’s official website.

“He is a great reader of the game and has a strong presence on the pitch, with the ability to remain calm under pressure – coupled with his composure on the ball and a huge presence in both boxes – I can see he will fit well into this group both on and off the pitch.

“He has a great personality and is a fantastic addition to the club. I would like to welcome Harry to Manchester United and we are looking forward to working with him as we prepare for the new season.”

“It is what it is, he’s a special player, he’s not a player we want to lose but it’s something we’ll see about over the weekend,” the Leicester City manager told Sky Sports.

“At the moment, the clubs have agreed but there is still more work to do.

“The fee has been agreed for Harry, and we’ll see how the weekend goes. I think it’s an incredible piece of business.

“Everything about Harry over the course of this pre-season – I’ve been involved in this type of situation before where things have been said and whatnot, and things happen to manufacture a deal – this is a guy who knows there’s been interest all the way through the summer.

“If you think of the attributes of centre-backs, he has them in abundance. Leicester fans won’t thank me for this, but they’re going to be under real pressure to keep him this summer,” Neville said, speaking on his podcast.

“We talk about John Stones being good on the ball, I actually think Maguire is the equal of him on the ball.

“A big statement, maybe, as Stones is seen as the composed, ball-playing centre-back, but I think Maguire is just as good on the ball.”

“You move here, Kyle (Walker) is here. You move here and he moves back. There will be space here,”

“Find that situation because the guy (Maguire) is not fast. You will find space here,” said the Man City boss in one of the more revealing, interesting parts of the documentary All Or Nothing.

“Maguire has been a giant in both boxes right throughout the tournament,” said Southgate, after every England fan’s life peaked as the Three Lions beat Sweden 2-0 in the quarter-final of the World Cup, with Maguire scoring the opener.

“He’s getting his bonce on everything, isn’t he? We’ve scored set-play goals because of him up to this point and today he’s got the one he deserved.

“His first game…he talked about just being desperate not to make a mistake.

“I remember saying to him before the next game ‘OK, how about now we try and be as good as we might be?’ because I think he’s a super-talented player.

“When I was watching him during the season, I was so keen that he stayed fit because this was a stage that I was certain he could show he could play at. I’m not sure he’s always believed that.

“His use of the ball is as good as any centre-back in the tournament. Hopefully he’s gaining belief from the performances at this level.”

“I think Harry’s a good player and over the last few years he’s improved as a player,” he told ESPN FC.

“He’s gotten better, and he’s been a main player for Leicester City, but also for England. I think he’d be a good signing if they can get him.”

“Sometimes, the penny just drops for a player at a tournament, and it is the right time for you, in the right team,” wrote Ferdinand in his 2018 World Cup column.

“For me, that moment came at the 2002 World Cup. That was when I found my way, and developed a total and clear understanding of my position.

“It seems like Maguire, a ball-playing defender like me, is doing something similar. I had my reservations about his mobility at this level, because there have been times I have seen him exposed in the Premier League for Leicester.

“But some people are just made for the slower pace of international football and, on top of that, Maguire is thriving on the kind of football England play. We are a possession-based team now, who look to dictate play and hold on to the ball for long periods.”

Kids often stop other sports too early. Maguire credits schoolboy rugby for "helping me with my bravery, weaving in and out of players, helping with agility" & hockey "helped my vision and passing" and cross country for his county (reached national standard one race) for stamina.

“I’ve been a big fan of his for years. He always reminds me of Richard Dunne because you look at him, he’s not a great mover, he’s not silky smooth but he is so effective,” said Redknapp during the 2018 World Cup.

“What a competitor, what a good player, good in the air, good on the ball. I see Tony Adams in him as well. He’s a leader and I think Leicester are going to have an awful time trying to hang onto him. There’s going to be a lot of clubs trying to buy Harry Maguire, for sure.”

If @LCFC keep hold of @HarryMaguire93 fancy they just might break into the top 6 next season. Wouldn’t be the miracle of 2016 but tasty nevertheless.