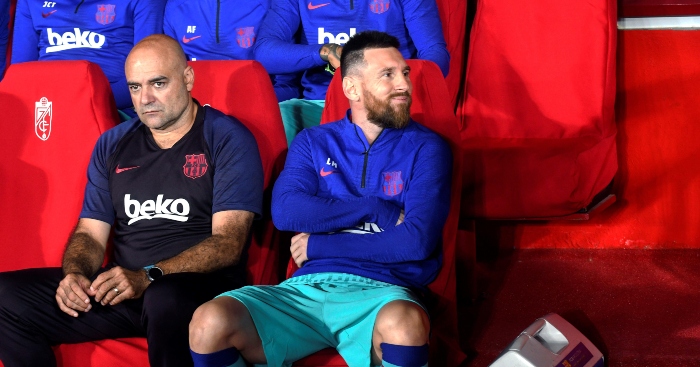 Barcelona‘s start to the 2019-20 season has gone from bad to worse with a defeat to Granada, but who is to blame?

The 2-0 reverse, in which they were behind inside two minutes, left Barça eighth in La Liga after the opening five games of the season, with nine goals conceded – just one fewer than they conceded in the entirety of last season’s Champions League run.

There have been obvious things to point to – Lionel Messi missed the start of the season, for example, while Ousmane Dembélé is still sidelined – but here’s what those in the know have been saying,

All roads lead to Valverde

As expected, plenty of criticism has come the way of Ernesto Valverde, with last season’s league title not enough to shield him from the media glare.

“The way Barcelona have begun these away games is partly the players’ fault, but it’s also down to the coach and his team talks,” writes Luís F. Rojo in Marca.

“Barcelona don’t play anywhere near as well away as they do at home, neither in defence nor attack. They’re the team that have conceded the most goals in LaLiga Santander alongside Real Betis, which is a rather worrying statistic for a team that’s used to keeping clean sheets.”

Last season’s Champions League exit at the hands of Liverpool – well, specifically the nature of that exit – also seems to have played a part.

That’s the view of El País‘ Ramón Besa, at least, with the journalist saying: “The symptoms right now are that it will be hard for Valverde to endure and for the board to hold him after his removal was announced and at the same time denied days after the humiliation at Anfield.”

“A clean break in the summer would have been relatively painless and it would have allowed time aplenty to prepare for the new season under a new coach. May or June was the ideal time for a change,” the Evening Standard‘s Ben Hayward argues.

Hayward claims “something was broken on the night of May 7 at Anfield, and four and a half months later, it is starting to look like it cannot be fixed.”

It will surely be tougher to make the necessary changes mid-season, but there are some suggesting Barça need to bite the bullet to avoid it getting even worse.

Barça haven’t won the Champions League since 2015, which wouldn’t be quite as bad if Real Madrid hadn’t won it three times in the interim.

However, according to former club captain Xavi, an obsession with that trophy runs the risk of hindering their overall performance.

“I don’t think the Champions League should be an obsession for Barcelona,” he said.

“It should simply be seen as a challenge, a goal, but nothing more than that. If you obsess over something then it actually becomes counterproductive.”

“Barcelona haven’t been the same since they were thrashed at Liverpool on May 7,” writes Javier Rodríguez Marzo in Sport.

“Just like after Rome, Bartomeu opted to cauterise the wounds instead amputating limbs – not sacking Valverde. Instead he signed big names – De Jong, Griezmann and nearly Neymar. For now that’s not working.”

Rodríguez Marzo draws particular attention to Griezmann, saying the Frenchman is “still not living up to the price tag” after his summer move.

The Uruguayan looks “a shadow of himself away from home,” explains Juan Jiménez of AS.

Suárez has scored one away goal since April 2, and none on the road this season – all the more important given Messi’s early absence.

This has brought what Jiménez calls Valverde’s “third crisis” after the defeats to Roma in 2018 and Liverpool in May.

Luis Suarez says Barcelona have a "tough year ahead" after their worst league start for 25 years.

For much of the summer, any discussion of Barcelona’s preparation for the new campaign surrounded a protracted move to bring Neymar back to Camp Nou. However, the Brazilian remained in Paris and Barça haven’t been able to focus on the important stuff.

“The club’s unpleasantly public courtship of their opinion-dividing former star, which continued right until Spanish transfer deadline day in early September, was a serious distraction and created a strong impression that the squad is composed of a handful of untouchables alongside a group of players (Dembele, Umtiti, Nelson Semedo, Ivan Rakitic) who would have been happily jettisoned if a part-exchange deal for Neymar had been struck with Paris St-Germain,” Andy West writes for the BBC.

That’s a substantial amount of upheaval for a move that wasn’t even completed, and it’s tempting to ask whether they’d go down the same route if given another chance.