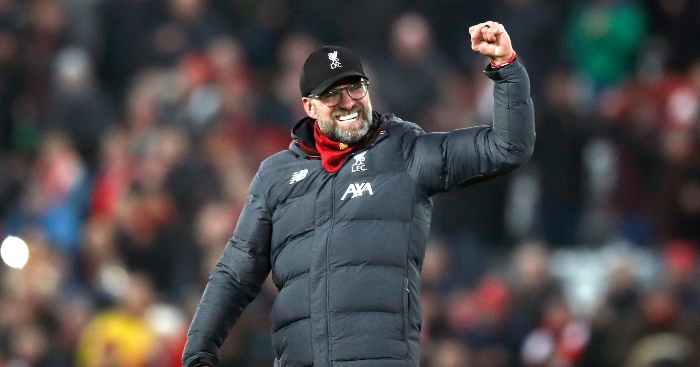 Liverpool‘s 2019-20 campaign is the sort of thing we haven’t seen in the Premier League… well, ever.

A record of 21 wins from 22 games is truly unprecedented, and Jurgen Klopp’s squad are on track to break all kinds of records.

However, even those ridiculous numbers can’t tell the whole story. The picture is not complete until we hear what some of the most prominent football pundits have been saying about the champions-elect.

“They’re walking alone to the earliest title victory in history.”

“We talk about Liverpool, this team doesn’t do defeats”

I think if there was a small group of supporters who didn’t believe (they’d win the league), they certainly do now

“I’m saying that with real pain – this is the best team in the world.

G Neville: “There is an element of you have to accept Liverpool are a huge football club, but there are some huge decisions that need to be made in that boardroom at United. I can’t believe the squad they’ve ended up with after the investment made.” #mufc [Gary Neville Podcast]

“You can have top players, but can you get them playing a style of football that’s capable of challenging this Liverpool team? Liverpool look like they’ll dominate as United did in the late 1990s and early 2000s.”

“People are talking about them turning into invincibles. If that happens, then you can bet your bottom dollar [the gap to second will] be 20 points.”

“If this team are going to be one of the greats, and bring it back after 30 years of hurt, it’ll be a most wonderful thing – but then they need to keep on doing it.”

“It’s OK buying players, but it’s what you do with them. Sometimes we forget that.

“Once you have that player you have to improve them, and Jurgen Klopp probably doesn’t get enough credit for that, the work he does as a coach.

“Liverpool are not buying superstars, they are making them.”

‘This team have been brilliant in Europe over the last few years and everyone is getting carried away with them because they’ve been so brilliant, but this will be their first league title.

“What do you get for second, a pat on the back?”