What would Klopp do? Learning from the LFC boss about food & drink 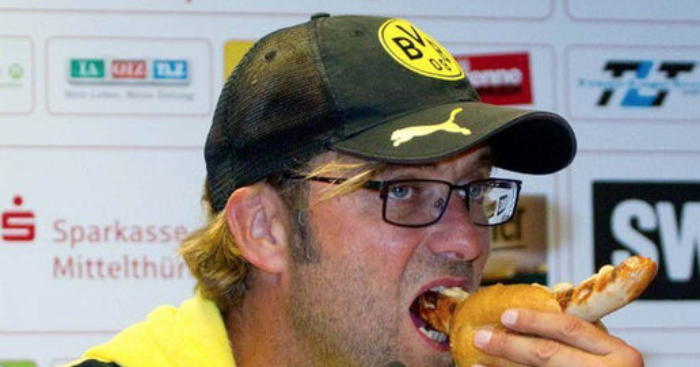 The following is an extract from ‘What Would Jurgen Klopp Do?’, a new book written by long-time Planet Football contributor Tom Victor, published by Seven Dials.

Food and football have a strange relationship. There’s a lovely nostalgia about meals which, in any other circumstances, would be considered ‘bad’. Cheap pies filled with mystery meat. Hot dogs that are somehow too hot and too cold at the same time. Bovril.

Why should you settle for these sub-par snacks, though? Did Jurgen Klopp settle for Simon Mignolet, Alberto Moreno and Jordon Ibe? Of course not. All three played in his first Liverpool game, but now they’re nowhere to be seen.

There’s a difference between being a perfectionist and just wanting better for yourself. Brendan Rodgers’ time in charge of Liverpool, immediately before Klopp, was akin to an average burger with occasionally great sauces. But why be content with the luck of the draw when you can switch it up for prime beef that stands on its own?

There are two types of food connoisseur. You’ve got the pretentious type, who will put stock in famous restaurants and make a point of going somewhere because a celebrity included it on their Instagram story; and there are those who know exactly what they want and how it should be.

Jurgen Klopp, quite clearly, is the second of these. He’ll pick some of the less obvious menu items – a midfielder from relegated Newcastle here, a left-back from relegated Hull there – and turn them into a gourmet meal because they complement the other ingredients.

The perfect gift for any football fan in your life, this is a celebration of football's greatest manager and a guide to winning in your own life.https://t.co/xwCLH0zv0d pic.twitter.com/hJWmbpIrSe

“I’ve been impressed by how he’s managed to keep players who’ve had more peripheral roles at the club motivated and happy, though perhaps this can also be put down to the recruitment process and signing of players with a ‘team first ethic’,” Hari Sethi tells me, while Dan Austin points to how the manager “has converted players like Gini Wijnaldum and James Milner into footballers with a completely different position and playing style compared to their previous careers, and reinvigorated the careers of some who plenty thought had permanently been written off, like Dejan Lovren and Divock Origi”.

When you’re cooking for a crowd, you’re never likely to find yourself dealing with a group of people with identical tastes. Part of your task will come down to compromising on your own tastes to make everyone happy, but there’s also skill involved in letting everyone feel included even when they don’t get their first preference.

The wurst of both worlds

Before Jurgen Klopp arrived on the scene, calling someone the barbecue chef of football might have felt like a coded insult. Not any more. Indeed, the thought of going to an actual barbie hosted by him feels just as appetising as watching him cook up that clunkiest of cliches, the ‘feast of football’.

Hosting a barbecue for a dozen people requires perfect timing, making sure everything is cooked through but not burned and taking just as much care over the salads and vegan options as the main-event meats, all the while ensuring you can still handle your hosting duties. Some people need a series of alarms and handwritten notes for this – failing to prepare means preparing to fail, and all that – but enough practice makes everything that bit easier.

If you take a leaf out of Jurgen Klopp’s book, you’ll soon be able to do it by feel alone. No one can teach instinct, but don’t let that stop you working with the instincts you already have.

‘What Would Jurgen Klopp Do?’ Is out today! That’s exciting, huh? Get yourself a copy here https://t.co/6LPmMczYw2

It’s the middle of July, and it’s the day you’ve been waiting for since the start of the year. That’s right, it’s Jurgen Klopp’s annual summer barbecue.

The Klopp barbecue is like a Nando’s black card or a trip in a private jet. You’ve heard stories about it, and it sounds glorious, but you refuse to believe them until you get the chance to see it for yourself.

People have told you about the spread on offer – oh, the spread. Bratwurst, bockwurst, leberkase, kasekrainer, currywurst (with homemade curry ketchup, of course) and knackwurst. There are stories of the Klopp family-recipe potato salad, too. Apparently, the secret ingredient is love.

But stop. You can’t get too carried away. It’s probably just part of Klopp’s aura. He probably doesn’t even do any of the grilling. Even if he does, there’s no way it can be as good as you’ve built it up to be in your head, right? Right?

Q: You’re hungry but you don’t have much food in the house and it’s snowing outside – WWJKD?

A: It’s OK, you can improvise, just like Klopp did when he needed a left-back and all he had was James Milner and tens of hours of coaching time.

Get some instant noodles, a couple of slices of burger cheese, a fried egg and the five pickled jalapenos you have resting at the bottom of a jar. Mix them all together and sprinkle some cornflakes on top for texture. Drizzle with hot sauce. Boom! A filling,* nutritious** meal.

** more than one citation needed

‘What Would Jurgen Klopp Do?’ by Tom Victor, published by Seven Dials, is out now and available to buy.