When Mbappe, Neymar & Messi have played together – & how PSG fared 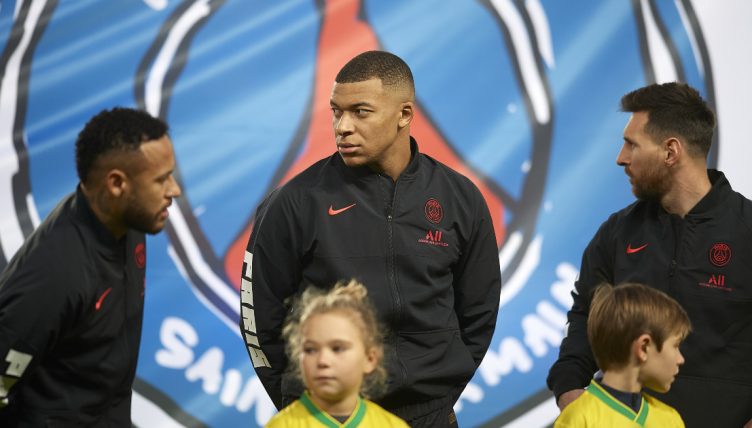 When it was announced that Lionel Messi, arguably the greatest footballer in history, was set to join PSG, talk immediately turned to how devastating their forward line would be.

How would Messi fit in alongside Neymar and Kylian Mbappe? Could they play together? Would they be as amazing as it first seemed?

Whilst we have all been able to mess around in our notebooks, coming up with even more crazy tactical imaginations that fit three of the best attacking players in the world in the same system, Mauricio Pochettino has had to find a way to actually do it.

But due to fitness issues, injuries, and tactical requirements, Messi, Neymar and Mbappe have actually only started eight games together so far.

Here’s what happened on each of those occasions.

It took Messi a few weeks to get fully fit after joining from Barcelona, but he finally started his first game against Club Brugge in the Champions League.

He lined up on the right of a front three, with Mbappe down the middle and Neymar on the left providing the French starlet service with their endless bounds of creativity.

At least that was the plan. What actually happened was that Ander Herrera scored PSG’s only goal in a 1-1 draw in Belgium. Not the ideal start.

Four days after Brugge the trio started once more, this time in the league against rivals Lyon.

This time Pochettino sent his side out in a 4-2-3-1 formation, with Messi playing as in the number 10 role behind Mbappe, with Neymar to the left and Angel Di Maria to the right. Talk about stacked.

The Parisian side went one-nil down, however, and it took a Neymar penalty in the 66th minute to equalise.

Imagine if Cristiano Ronaldo didn't celebrate the winner scored by his team just because he was subbed off.

We would never hear the end of it till the end of his career. Messi gets away with too much while Ronaldo is the most hated.pic.twitter.com/oNFR0WUypM

This match was the first indication that the trio could work together, all three helping PSG to a 2-0 win.

Pochettino set his side up to counterattack, with Messi on the right, Mbappe through the middle, and Neymar on the left.

All three constantly switched positions with one another and, while City dominated the ball, the dynamic trio were a constant threat; Messi scored his first PSG goal in memorable fashion with Mbappe assisting him.

Yet there were also warning signs; all three were reluctant to track back and defend, opening up huge gaps between the lines. It would come back to bite them in the reverse fixture.

That was the beginning of an incredible run of form for the trio, who scored in almost… sorry? They immediately lost 2-0 to Rennes in their next match? They didn’t even score once?

Messi and Mbappe had played well in the previous game against RB Leipzig, the Argentine scoring twice and the France international getting one too in a 3-2 victory.

But Neymar had been unavailable. Now, against Marseille, he returned… but not triumphantly.

The Brazilian played as the number 10 this time, with Messi on the right and Mbappe up top. The three were unable to conjure up a goal and the match petered out to a 0-0 draw.

Injuries and the international break meant the next time Messi, Mbappe and Neymar played together wasn’t until November.

This time it was to much more avail, Mbappe and Messi both getting on the score sheet and the Argentina international getting an assist too. It was Messi’s first Ligue 1 goal, and it was some finish too.

Still, it was far from a routine victory. Keylor Navas was dismissed midway through the second half, only for Nantes’ to cancel out Mbappe’s earlier opener in the 76th minute. PSG needed a late own goal and that moment of Messi magic to register a 3-1 win.

Another view of Lionel Messi's goal against Nantes 🔥 pic.twitter.com/wec1qgEmBy

If the first City game showed everything good the front three could do, the second demonstrated that playing each of them together can make them lopsided.

Mbappe scored the opening goal of the game, and Neymar and Messi were both involved in the build-up, but City swiftly took total control of the match while PSG’s trio of superstars dawdled around the halfway line, disinterested in putting in the hard yards during the long passages of play that Pep Guardiola’s side dominated possession.

City scored twice to come from behind to win and analysts everywhere were in agreement the front trio had done more harm than good.

“Pochettino has to get out of the club. If he has the chance to go to Manchester United. I would be gone tomorrow and it’s because of those 3 stars”@carra23 and Thierry Henry talk about the way PSG are shaped 👀 pic.twitter.com/MZ6fxJVuXG

The last time all three started a match together was back in late November.

PSG won 3-1, with Messi achieving a hat-trick of assists; two of which set up defender Marquinhos. Yet Neymar suffered an ankle injury late in the match and has not returned to the side since, unable to play a single minute in December.

It is unlikely the Brazilian will return by the end of January, with February’s Champions League clash with Real Madrid the more pressing date in the calendar. But given their iffy record so far, it may well be a blessing in disguise for Pochettino if he has to forego a member of his superstar forward line against the La Liga leaders.