Where are they now? 13 under-16s PL clubs signed for big money 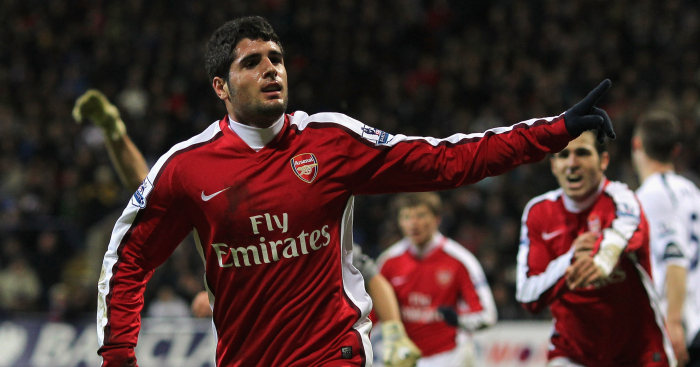 Liverpool, Arsenal, Chelsea, Manchester United and Manchester City are among the sides to have spent hefty fees on players under the age of 16.

At the start of July 2018, City signed 16-year-old Ben Knight from Ipswich Town in an initial £700,000 deal, beating off competition from Tottenham, Manchester United, Borussia Dortmund and Monaco.

We’ve taken a look at 13 players who Premier League clubs were willing to splash the cash on before they turned 16.

You’ve probably heard of him. Sterling was still just 15 when Liverpool signed the winger from QPR in a £600,000 deal which had the potential to rise to £5million.

A sell-on clause inserted in the transfer meant the Londoners pocketed a hefty fee when Sterling left Liverpool to join Manchester City in a move worth over £40million just five years later.

Arsenal shelled out £2.7million to prise 15-year-old Merida away from Barcelona in 2005.

The Spaniard ended up making just six Premier League appearances for the Gunners before leaving on a free for Atletico Madrid and now, aged 28, after somewhat a journeyman career, he lines up for Osasuna.

Former Arsenal midfielder Fran Merida on leaving Arsenal: "It was a mistake, I wasn’t patient. I realise that now"

Chelsea paid an eye-catching £3.5million for Serbian centre-back Rajkovic in 2005 after he appeared for OFK Beograd’s first-team at the age of just 15.

Competing at the 2008 Olympic Games – after which Andre Bikey and Ryan Nelsen were named as the stand-out centre backs – he spat at referee Abdullah Al Hilali as his nation lost to Argentina.

Rajkovic later found himself ineligible for a work permit in the UK, so Chelsea cut their losses and sold him to Hamburg for half the price they paid.

Suspension and then injury problems hampered his time in Germany, and he is now with Palermo in Serie A.

Joining from Ebbsfleet in 2016, Tracey was handed a new two-year deal at Tottenham recently, alongside forward Kazaiah Sterling.

The midfielder, who can feature in a holding or advanced role, impressed Spurs scouts when he led Ebbsfleet on an impressive FA Youth Cup run in 2015, and played 20 times in PL2 last season.

Football’s most expensive 14-year-old, Ojo, a former team-mate of Dele Alli at MK Dons, moved to Liverpool in 2011 for £2million.

The winger lined up for MK Dons’ Under-18 side aged just 13, becoming the first Dons youngster to win an England youth cap in the process.

Ojo impressed last season in a loan spell at Fulham, helping them to promotion to the Premier League.

“I’m definitely in the best shape I’ve ever been and I feel like I’m as strong mentally as I’ve ever been, so I’m really excited about what’s to come this season.”@sheyi_ojo ready to catch Klopp's eye: https://t.co/v4BwpZCFhf pic.twitter.com/0hCPmxXMcY

Less than six months after making his debut for England’s Under-16s, McCann, 15, left Coventry to join Manchester United in January.

A United fan, McCann had been with Coventry since the age of seven, and such was the Old Trafford club’s desire to sign him, they paid Coventry for his services despite there being no contractual obligations.

“Arsenal boss Wenger shores up leaky defence… by signing 15-year-old Siemann from Hertha Berlin,” was the Daily Mail headline when Arsenal paid a £250,000 for the teenager in 2011.

Three years later, however, he was released after failing to progress at the Emirates and joined Porto.

In Portugal he was hit with a one-year ban for taking banned substances, which he insists were pills prescribed to him by his father, who is a doctor, to reduce his stress levels – the player also suggests he was taking the medication at Arsenal.

For the last two years the 22-year-old has lined up for FC Cologne.

Eventually a £5million settlement was reached which saw Woods and Tom Taiwo join Chelsea as 16 year olds – but Danny Rose remained at Elland Road for another season before joining Tottenham.

He made just two FA Cup appearances and has spent the last four seasons at Hartlepool United, now lining up in the National League.

The other player Chelsea snatched from Leeds was Taiwo, a fellow midfielder who had the misfortune of breaking his leg just two days before his scheduled youth team debut.

Taiwo never made a senior appearance for Chelsea and recently signed for Hamilton Academical, having spent the last six years playing north of the border with Hibernian and Falkirk.

Obi became Bury’s youngest ever player when he took to the field in the Johnstone’s Paint Trophy just 86 days after his 15th birthday, prompting Liverpool to move for the giant defender in 2016.

“He’s a man mountain, but we teach them how to play football and he’s going to be an unbelievable asset to the football club,” then-Bury manager David Flitcroft said after his debut.

“He’s been training with the first team and he’s going back to school next week. I think he’s the best talent right now at 15 years old in the entire country.”

Now 17, Obi is yet to make his first-team bow for the Merseysiders.

Manchester City have invested heavily in signing players from all around the world to join their academy over the last few years and Touaizi joined the club from Valencia in a €300,000 deal which could rise to €2million.

The forward moved to Manchester as a 15-year-old in January 2017 after breaking a number of goalscoring records in Valencia’s academy, bagging 70 goals in two years.

Morocco and Spain are battling for the youngster’s international allegiance, although he has now represented the latter at Under-17 level.

While he is yet to appear in City’s first team, Touaizi did score 12 goals in 19 appearances in the Under-18 Premier League last term.

Who is the better cook… Nabil Touaizi or Eric Garcia? 🤔

Find out as we play "Him or Me" with two of our Under 18s stars! #mancity pic.twitter.com/GbIYYMpSNT

Robertson was born in Scotland but grew up in Australia and made headlines on both sides of the world as he swapped Manchester United for Manchester City as a 14-year-old in October 2017.

Both his father and grandfather appeared for the Australian national side, while the youngster has already been called up to Australia, England and Scotland’s youth teams.

He is also eligible to represent Peru through his mother.

“There were four or five Premier League clubs after Finley in the end and it’s extremely difficult to keep hold of a boy once that happens,” Ricky Duncan, Southend’s youth team boss, told the Essex Echo.

Arsenal, Chelsea and Liverpool were all interested in Burns, leading City to pay more than required as set out by EPPP regulations to secure his signature.

Given his tender age, it may still be a few years before we see Burns play senior football.