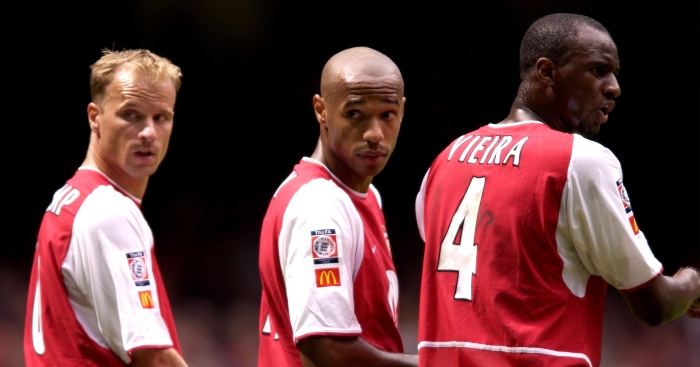 Arsenal became the first English club to name a completely foreign matchday squad against Crystal Palace in 2005 – but what happened to those players?

Their team sheet included players from eight different countries, but not a single one from the United Kingdom and it seemed to do the trick as Arsenal won 5-1.

We’ve looked back at the team from that day to see what those players are up to now.

After leaving Arsenal in 2008, the goalkeeper spent two years with Stuttgart before coming out of retirement for a second spell with the Gunners in 2011.

In 2017, Lehmann returned to Arsenal once again and joined Arsene Wenger’s coaching staff, but he was axed when Unai Emery was appointed.

The 51-year-old spent time as an assistant coach at Bundesliga side FC Augsburg in 2019 and was sacked after overseeing just three wins in three months.

He was and always will be a mad bastard.

READ: Jens Lehmann: The maddest of the lot and the last of the maverick keepers

Lauren became the perfect replacement for Lee Dixon and was one of Arsenal’s unsung heroes during their famous Invincibles season of 2003-04.

The defender eventually lost his place in the side to Emmanuel Eboue and had spells with Portsmouth and Cordoba before retiring in 2010.

After hanging up his boots, Lauren has worked as a TV pundit and an Arsenal ambassador in Africa.

Toure moved to Manchester City in 2009, had a three-season spell with Liverpool and then finished his playing career with Celtic.

The 38-year-old began his coaching career with the Ivory Coast national team and also became a technical assistant at Celtic.

Toure followed Brendan Rodgers from Scotland to Leicester City in 2019 as a first-team coach, and he wants to become a manager in the future.

“My dream is to win the World Cup with an African team, for my continent,” Toure has said.

“I love Africa. I am very grateful for everything I have in Europe but everything I’m learning I want to help my continent to get better – in football as well.”

Arsene Wenger viewed Cygan as the centre-back successor to Tony Adams, but it’s fair to say he failed to impress the Arsenal supporters during four error-strewn years at the club.

The defender was sold to Villarreal in 2006 and retired from professional football five years later.

Cygan returned to former club Lille in a coaching capacity and was assistant coach at Belgian Second Division side KSV Roeselarespent for the 2016-17 season.

Clichy is one of two players on this list who are still playing professional football.

The French full-back only made seven league appearances during 2005-06 but went on to establish himself as a regular at Arsenal following Ashley Cole’s move to Chelsea.

He won another two Premier League medals with Manchester City and is now playing for Servette in Switzerland.

Pires was a key member of the Invincibles side who went unbeaten to win the 2003-04 Premier League title, one of four major trophies he won during his six-year stay in north London.

After spells with Villarreal and Aston Villa, Pires came out of retirement to play for Indian Super League side FC Goa before hanging up his boots for a second time in 2016.

The 47-year-old has done some punditry work for French television and now acts as an ambassador for Arsenal.

READ: An ode to Robert Pires, the final touch of class which made Arsenal Invincible

Vieira finished his career at Manchester City and took his first steps into coaching at the Etihad, becoming their reserve team and Elite Development manager.

The 44-year-old spent two and a half years in charge of MLS club New York City FC in 2015 before moving to Nice, but he was sacked in December 2020.

“Yes, like any player, when we do this job we want to touch the very highest level,” Vieira told RMC in 2019 when asked about potentially managing Arsenal.

“But we do this job, and I do this job, to one day to be the coach of a team that participates in the Champions League.”

After leaving Arsenal in 2005, Edu spent four years at Valencia then retired while with Corinthians in December 2010.

The midfielder was offered the role director of football at the Brazilian club a few months later before joining the Brazilian national team as their general coordinator in 2016.

Edu’s work in Brazil led to him being appointed as Arsenal’s first technical director in 2019.

“Arsenal has always had a special place in my heart and I’m thrilled to be returning to this great club in this new role,” he told the club’s official website.

“We have a strong squad and some very talented young players with fantastic people at every level. I’m looking forward to helping make a difference.”

The midfielder joined Atletico Madrid in 2007 before returning to boyhood club Sevilla five years later, going on to lift three consecutive Europa League titles between 2014 and 2016.

The striker left Arsenal for Barcelona in 2006 but returned to the Emirates on a short-term loan in 2012 before hanging up his boots two years later.

Henry became the latest former Arsenal player trying to follow in Arsene Wenger’s footsteps by becoming the second assistant coach of the Belgium national team in 2016.

After a disastrous time at Monaco, the 43-year-old was appointed as the manager of Major League Soccer side Montreal Impact in 2019.

On This Day in 2012, Thierry Henry grabbed a last minute winner to help Arsenal finish in the top 4. His final goal for Arsenal Football Club.

Bergkamp is regarded as one of Arsenal’s greatest players of all time, having scored 120 goals from 423 appearances over 11 trophy-laden seasons in north London.

Upon retiring, the Dutchman started a career in coaching and eventually became Frank de Boer’s assistant manager at Ajax in 2011.

Following a poor start to the 2017-18 season and a disagreement with Marc Overmars, Bergkamp was sacked by Ajax and hasn’t taken up another role with another club since.

The goalkeeper spent eight years at Arsenal but joined Watford in 2012 when his contract had expired.

Almunia was forced to retire in 2014 after a heart condition was detected at a routine medical ahead of a move to Serie A side Cagliari.

Despite a promising start to his Arsenal career, Senderos eventually fell out of favour under Wenger and was sold to Fulham in 2010.

He went on to play for Valencia, Aston Villa, Grasshoppers, Rangers, Houston Dynamo and FC Chiasso before retiring in December 2019.

The midfielder returned to Arsenal for a second spell in 2013 but is currently without a club after leaving Getafe in 2019.

Away from football, Flamini is committed to helping the environment and co-founded GFBiochemicals, a company that produces eco-friendly solvents and detergents.

“Living by the sea, growing up I got exposed to many of the world’s problems, like plastic in the sea,” Flamini told the Daily Telegraph in 2019.

“You could see we were not going in the right direction. So I decided to use my platform as an athlete to drive change.”

Whilst still at Arsenal, Mathieu Flamini secretly created GF Biochemicals. The company has since made scientific breakthroughs that could bring an end to the use of fossil fuels.

Bringing his personal net worth to an estimated $14 billion 😳 pic.twitter.com/pxg8GrOkVf

After eight years at Arsenal, Fabregas moved to Barcelona in 2011 but failed to establish himself as a regular back at the Nou Camp.

The midfielder returned to England with Chelsea in 2014, winning two Premier League titles before moving to Monaco.

Van Persie became public enemy number one at Arsenal after rejecting a new contract at the Emirates and moving to arch-rivals Manchester United in 2012.

The striker won the league during his first season at Old Trafford but continued to struggle with injuries and retired in 2019 following a stint at boyhood club Feyenoord.

He has since embarked on a career in the media and currently works as a pundit for BT Sport.