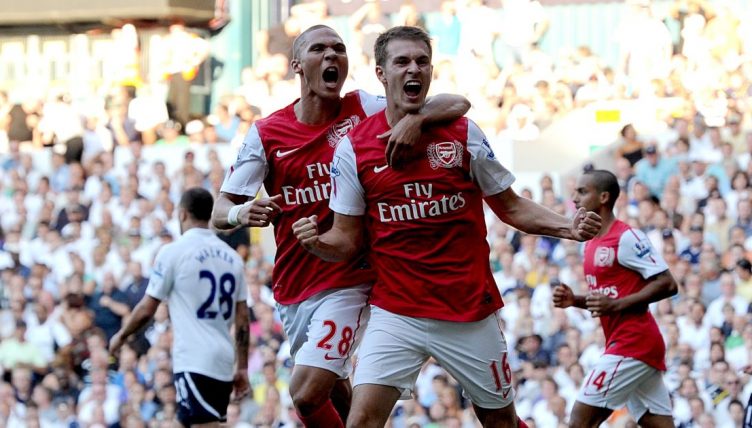 While Arsene Wenger brought several French players to Arsenal during his time at the club, he also put a lot of faith in homegrown talent.

“I believe when you have a core of British players, it’s always easier to keep them together,” Wenger said at the time.

“We are delighted that these five young players have all signed new long-term contracts. The plan is to build a team around a strong basis of young players in order to get them to develop their talent at the club.”

We’ve taken a look at those five players to see how they’ve fared since.

Once regarded as the future of English football, Wilshere shot to prominence with a brilliant display against Barcelona in the Champions League in February 2011.

Unfortunately, he’s been unable to replicate performances like that too often as a series of injury problems have derailed the midfielder’s career.

The 29-year-old still made nearly 200 appearances for the Gunners before being released when Wenger departed at the end of 2017-18.

His terrible luck with injuries continued during spells at West Ham United and Bournemouth, and he now finds himself without a club.

The 19-year-old comes of age against Xavi, Iniesta, and Busquets on an unforgettable night at the Emirates. pic.twitter.com/SuSdo10sNt

After suffering a horror leg-break early on in his Arsenal career, Ramsey had loan spells at Nottingham Forest and Cardiff City before re-establishing himself in the team.

He then developed into one of the best midfielders in the Premier League, playing a starring role in the last three FA Cups won under Wenger.

The Wales international decided to join Juventus on a free transfer in 2019, having scored 64 goals in 369 appearances during his 11 years at Arsenal.

Ramsey is yet to justify his lofty £400,00 a week wages in Turin and has recently been linked with a move back to the Premier League.

Signed from Southampton for £15million in the summer of 2011, Oxlade-Chamberlain was widely tipped for a bright future at the Emirates.

He enhanced his reputation with a brilliant performance against AC Milan in 2012 but struggled to ever nail down a starting spot under Wenger.

The England international eventually ran out of patience and opted for a fresh challenge in 2017, joining Liverpool in a £35million deal.

“It was the hardest decision I’ve ever had to make,” Oxlade-Chamberlain told The Times in 2017. “I want to thank the Arsenal fans who’ve always supported me but I can’t apologise for my decision to leave. I want to get more out of myself.

Despite struggling with injury problems at Anfield, he’s still won the Premier League and the Champions League with Jurgen Klopp’s side.

Oxlade-Chamberlain is not the first player to leave Arsenal and win the Premier League title 👀 pic.twitter.com/PdGryifTL6

Not to be mistaken for Oxlade-Chamberlain, Gibbs came through the Arsenal academy and made his senior debut for the club in 2007.

After initially playing understudy to Gael Clichy, the left-back later established himself as a regular in the team, making over 200 appearances in all competitions.

But he fell down the pecking order following the arrivals of Nacho Monreal and Sead Kolasinac, departing for West Brom in the summer of 2017.

The 31-year-old spent four years with the Baggies but has recently joined David Beckham-owned Inter Miami in the MLS, where he’ll link up with big names like Gonzalo Higuain, Blaise Matuidi and Ryan Shawcross.

A Gunners fan since childhood, Jenkinson earned a dream move from Charlton to the Emirates in 2011 and was initially regarded as Bacary Sagna’s long-term successor.

But the full-back struggled with injury problems and never played more than 14 Premier League games for Arsenal in a single season.

After outlasting the rest of the British core, he finally waved goodbye in 2019 with a £2million move to Nottingham Forest, ending an eight-year association with the club.

“I can’t really put into words what it has meant to me to play for this club, but what I can say is I have truly lived my dream,” Jenkinson wrote on Instagram.

“This brings me to you, the proper Arsenal fans, as I have lived your dream too. It has been an up and down journey for me but I hope you all have seen how much it has meant to me and know that I have given it my all.

“I have played 70 games for Arsenal which if you told me I would do as a kid I would’ve laughed at you. I take many great memories and friendships from my time at this special football club, and it is a chapter in my life that I will cherish forever.”

The 29-year-old has struggled to work his way into Forest’s starting XI, making just 11 Championship appearances in the last two seasons. According to reports, manager Chris Hughton has told him that he is free to move on this summer.

Ranking every player to wear the No.5 shirt for Arsenal in the Premier League