Where are they now? Arsene Wenger’s first 10 signings as Arsenal manager 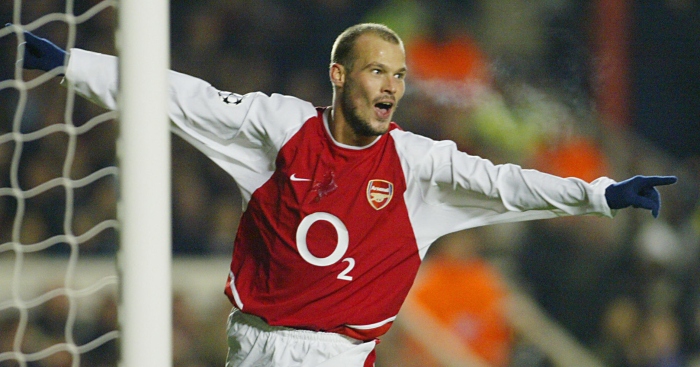 Arsene Wenger was renowned for unearthing talented players during his time at Arsenal – but he got off to a mixed start in the transfer market.

The Frenchman may have signed Marc Overmars and Freddie Ljungberg at the start of his reign, but there were plenty of flops as well.

We’ve looked back at Wenger’s first 10 signings after becoming the Arsenal manager in September 1996.

Arsenal signed French midfielders Remi Garde and Patrick Vieira in the weeks before Wenger’s appointment but Anelka was his first official signing.

He moved to Real Madrid in 1999 and later had spells back in England at Liverpool, Manchester City, Bolton Wanderers, Chelsea and West Brom.

Overmars made 143 appearances for Arsenal in all competitions between 1997 and 2000, helping the club win the Premier League and FA Cup in 1998.

The winger then spent four years at Barcelona and came out of retirement in 2008 to play for Go Ahead Eagles.

He became director of football at Ajax in 2012 and was recently linked with a return to the Gunners before signing a new contract with the Dutch side.

“There are still plenty of challenges at Ajax and I’m having a good time here,” Overmars said in 2019.

“We are taking steps with both the youth academy and the first team and we still want to show a lot.”

Grimandi started his career under Wenger at Monaco and reunited with his former manager at Arsenal in 1997, where he went on to win two league and cup doubles.

After hanging up his boots, he became a French-based scout for Arsenal and unearthed the likes of Abou Diaby and Bacary Sagna.

The 49-year-old left his role with the Gunners in 2019 to become technical director at OGC Nice, but he resigned after just six months.

Petit helped Arsenal win the double during his first season at the club and left for Barcelona alongside Overmars in 2000.

He returned to England with Chelsea 12 months later but was forced to retire in 2005 after failing to fully recover from knee surgery.

Since 2011, Petit has been an ambassador of the Homeless World Cup, and he has often appeared on French TV as a football analyst.

Upson joined Arsenal from Luton Town in 1997 as a highly rated defender, but Tony Adams and Matin Keown blocked his path into the first team.

The centre-back was sold in 2003 and went on to make over 250 appearances in the Premier League.while winning 21 caps for England.

He announced his retirement in 2016 and rejoined former side West Ham in a coaching capacity to help out with the academy players.

The 40-year-old has also moved into the broadcasting world and has worked for the likes of the BBC, ITV and Sky Sports as a co-commentator and pundit.

“It just blew my mind what Arsene Wenger brought to me”

Arsenal player Matthew Upson – who joined #AFC in 1997 as an 18-year-old, one year after Arsene Wenger started – on what the manager brought to the club, and him as a player. #MerciArsène pic.twitter.com/ojOZRU6adV

Wenger signed Boa Morte from Sporting Lisbon in 1997, but he was unable to establish himself in the first team and left for Southampton two years later.

The winger later played for Fulham and West Ham and retired in 2013 after a brief spell playing in the lower leagues with Chesterfield.

Since retiring, he has pursued a career in coaching and returned to Portugal to coach Sporting Lisbon’s under-19’s team.

In June 2019, Boa Morte was appointed as assistant manager to Marco Silva at Everton but they were both sacked a few months later.

Mendez was signed from non-league German team FC Feucht in 1997, but the midfielder only made 11 appearances for Arsenal before joining Spanish outfit Racing Ferro in 2002.

He then returned to the German lower leagues and announced his retirement after a brief spell with SpVgg Weiden in 2010.

The 45-year-old was appointed as manager of Bavarian amateur club FC Amberg in 2011, but he was sacked two years later.

Manninger mainly acted as the back-up goalkeeper to David Seaman during his five years at Arsenal.

He then had spells in Italy, Spain, Austria and Germany before returning to the Premier League with Liverpool in 2016.

Since retiring from professional football in 2017, Manninger has been focusing on his work in furniture and real estate.

Vivas joined Arsenal from Boca Juniors in 1998 and made 69 appearances for the club before signing for Inter Milan on a free transfer in 2001.

After finishing his playing career at Argentine club Quilmes in 2005, he became their manager eight years later but was forced to resign after attacking one of his team’s supporters in the stands.

“It was a fan that had been cursing me for the whole 90 minutes, from behind the fence,” Vivas told FourFourTwo in 2017. “So I reacted.”

Vivas spent two years at Estudiantes and is now working as an assistant to Diego Simeone at Atletico Madrid.

Manager Nelson Vivas doing his best Incredible Hulk impression after his side were denied a penalty 😡 pic.twitter.com/og4Hl2y3iY

Ljungberg joined Arsenal in 1998 and went on to win two Premier League titles and three FA Cups during his nine years at the club.

The winger retired in 2014 and returned to Arsenal in a coaching capacity, working with their under-15s before becoming the under-23 coach.

After Arsenal sacked Unai Emery earlier this season, Ljungberg was appointed as interim manager and was then retained as the first-team assistant coach by Mikel Arteta.

Arsenal’s 11 debut goalscorers under Wenger – & what they did next