Where are they now? Barcelona’s 10 youngest goalscorers since 1990 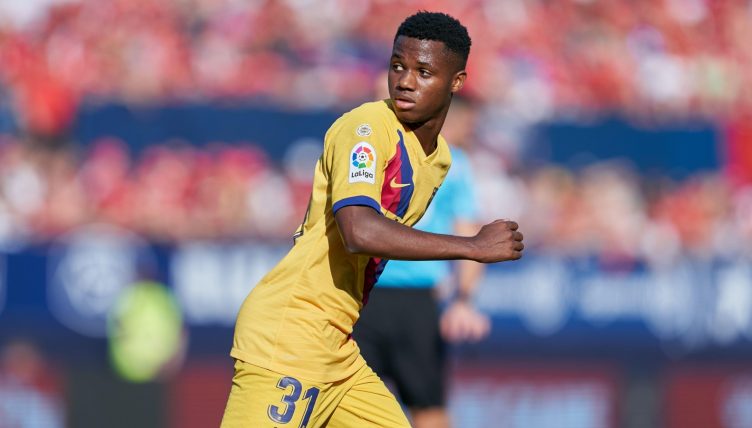 Barcelona have always given youngsters a chance in the first team, and some have taken to senior football like a duck to water.

The likes of Carles Puyol, Andres Iniesta and Lionel Messi became club legends, but not all of their talented prospects made the grade at Camp Nou.

We’ve listed the club’s youngest goalscorers in all competitions since 1990 to see what they’re up to now.

One of three current Barcelona players on this list, Fati wrote his name into the history books by scoring against Osasuna in August 2019.

The Spain international later became the youngest player to score in the Champions League and finished his breakthrough season with eight goals in 33 appearances in all competitions.

But his progress was derailed by a serious knee injury that caused him to watch from the sidelines for the bulk of the 2020-21 campaign. He’s since struggled to stay fit and has only started one match this season – leaving his World Cup spot in doubt.

Having broken all sorts of goalscoring records at youth level, Bojan made his first La Liga start at the age of 17 in October 2007 and scored against Villarreal.

He netted another 40 goals for Barcelona’s first team but struggled to handle the pressure of expectation and ultimately joined Serie A side Roma for a fee in the region of €12million in 2011.

The Spain international returned to the Camp Nou two years later, only to be immediately loaned out to Ajax and then sold to Stoke City in 2014.

Bojan enjoyed success in his first two seasons with Stoke but eventually fell out of favour. Loan moves to Mainz and Alaves followed before he signed a permanent deal with MLS side Montreal Impact in 2019.

The 32-year-old was a free agent for most of 2021 but is now plying this trade with Japanese side Vissel Kobe, linking up with former Barcelona team-mate Andres Iniesta.

Gavi was promoted to Barcelona’s first-team squad ahead of the 2021-22 season and scored his first goal for the club in a 3-2 win over Elche in December 2021.

“The way [Gavi] plays the game is spectacular and he has ambition and personality”, Xavi said after the game. “He is the future of this club. But not only him, also [Ronald] Araujo, [Alex] Balde, Nico [Gonzalez], [Ez] Abde. They are the future of the team and the club. They are a fantastic generation.

“They are the future of the team and the club. They are a fantastic generation. At that age I was scared, but they are wonderful.

“Gavi is a difference-maker and I’m delighted to have him, but I don’t want to compare him to anyone. He has no ceiling.”

He’s already made 55 first-team appearances for the club and looks set to become a mainstay of the Barcelona side for years to come.

You might have heard of him. Quite good, apparently.

After scoring 672 goals in 778 appearances and winning 34 trophies at Barcelona, Messi bid an emotional farewell to the club in 2021.

The 35-year-old then joined Paris Saint-Germain on a free transfer and continues to produce moments of magic on the regular.

The only player on this list that didn’t come through the La Masia academy, Pedri joined Barcelona from Las Palmas in a €5million deal in 2020.

He scored his first goal for the club on his Champions League debut in October 2020 and has since gone from strength to strength, establishing himself as a regular for both Barcelona and Spain.

His impressive performances saw him rewarded with the Golden Boy award in 2021, becoming the first Barcelona player since Messi to win the prize.

“I need a little time to take it all in,” Moriba said after scoring against Osasuna in March 2021. “I will never forget it. I will take it to the grave with me.”

But the club later relegated him back to Barcelona B and refused to let him train with the first team following a breakdown in negotiations over a new contract.

The midfielder was linked with Manchester City and Chelsea before deciding to join Bundesliga side RB Leipzig in 2021 in a deal worth an initial £13million.

He struggled to adapt to live in Germany and couldn’t break into their starting XI, making just six substitute appearances in the first half of 2021-22. The 19-year-old has now returned to Spain, joining Valencia on loan until the end of the season.

After Barcelona won the La Liga title in 1997-98, Jofre came off the bench to make his senior debut on the final day of the campaign.

Despite scoring Barca’s only goal in a 4-1 defeat to Salamanca, the winger would only make one more first-team appearance for the club before leaving in 2002.

He then fluctuated between La Liga and the Segunda Division, playing for the likes of Levante, Espantol, Murcia, Rayo Vallecano, Real Valladolid and Girona.

Jofre saw out his playing career with Indian Super League clubs ATK FC and FC Goa before hanging up his boots in 2016.

Still, that didn’t stop him from appearing for Barcelona legends alongside the likes of Rivaldo, Ronaldinho and Deco in a 3-2 defeat against Real Madrid in July 2021.

Xavi was handed his senior debut in a Supercopa de Espana fixture against Mallorca in August 1998 and made an immediate impact, scoring inside the opening 16 minutes.

Eighteen years later, he left Camp Nou as one of the greatest midfielders of all time, having won eight La Liga titles, four Champions Leagues and three Copa del Rey.

The former Spain international then decided to join Qatari side Al-Saad, where he stayed until his retirement four years later.

After cutting his managerial teeth in Qatar, the 42-year-old replaced Ronald Koeman in the Barcelona dugout in November 2021 and is making a decent fist of getting the club back on their perch.

🔙 #TBT
Did you know…?
Xavi scored his first official goal for Barça at Mallorca's pic.twitter.com/hqqN4Q8hoY

Dos Santos was once a highly rated prospect at Barcelona and scored his first senior goal in a Champions League group stage win over Stuttgart in December 2007.

Despite scoring a hat-trick against Real Murcia on the final day of the 2007-08 season, he was deemed surplus to requirements and sold to Tottenham for £4.7million.

The forward failed to live up to expectations at White Hart Lane, scoring just three goals in 33 appearances before being sold to Real Mallorca in 2012.

He then had spells at Villarreal and LA Galaxy before spending two years back in his native Mexico with Club America. The 33-year-old is now a free agent but is reportedly contemplating retirement and could focus on his restaurant business.

Born in Cameroon, Dongou moved to Barcelona from the Samuel Eto’o Foundation in 2008 and was tipped to follow in the footsteps of his compatriot.

The forward scored on his debut against FC Cartagena in the Copa del Rey in December 2013 but it was one of just three first-team appearances for the club.

He left Barcelona in 2016 and slumped down the Spanish league pyramid with Real Zaragoza, Gimnastic and Lugo before signing for Finnish side FC Honka in 2020.

The 26-year-old is now playing for Anagennisi Karditsas in the Greek Second Division.