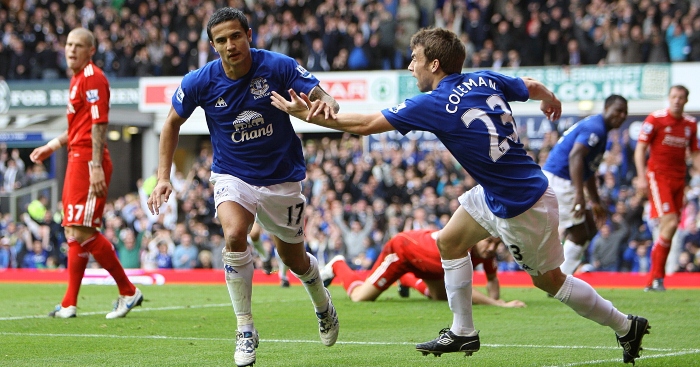 The Merseyside Derby in 2010 has been remembered by both Liverpool and Everton fans for many reasons.

For the Reds, the game marked the first match under the ownership of John W. Henry and another low point of Roy Hodgson’s short-lived reign as manager. For Everton, the 2-0 success – courtesy of goals from Tim Cahill and Mikel Arteta – was their only derby win of the 2010s – and remains their last Merseyside derby win to date.

Howard is Everton’s quintessential Premier League goalkeeper, making 354 league appearances for the club over a 10-year spell at Goodison Park.

The American, who also scored in a match against Bolton in 2012, became a firm fan’s favourite at the club. Howard returned the favour, saying before his final match: “I will remain an Evertonian for life. This will always be my team, my club.”

He left for Colorado Rapids in 2016 and retired in 2019. In March 2020, Howard returned to serve as player, sporting director and minority owner for Memphis 901 FC in the USL Championship.

A versatile player capable of being deployed at right-back, centre-back and defensive midfield, Heitinga spent five years at Goodison.

Sent off for Holland during the 2010 World Cup Final, Heitinga was voted Everton’s Player of the Season for 2011–12 by the club’s supporters having finally enjoyed a run in his more natural centre-back position.

Leaving for Fulham in January 2014, Heitinga also turned out for Hertha Berlin and Ajax before retiring in 2016. He is now the Under-19s’ manager for the Dutch club.

His replacement, Hibbert, became a cult hero at Everton after playing 329 games over a 16-year spell at the club without scoring a goal. After playing for non-league Hares FC in 2017, he was last reported to have bought a fishery in France.

Another defender who served Everton with distinction, Jagielka won 40 caps for England across his career.

His most memorable moment in over a decade at Goodison was undeniably a last-minute thunderbolt to equalise at Anfield in 2014.

After 385 appearances and 19 goals, Jagielka returned to Sheffield United in 2019, where he remains to this day.

Distin was the definition of Premier League stalwart, representing Newcastle, Manchester City, Portsmouth, Everton and Bournemouth during his career.

He made a rare mistake during the 2012 FA Cup semi-final defeat to Liverpool but was named the Player’s Player of the Year for that season. He also formed a solid partnership with Phil Jagielka during Everton’s impressive 2013-14 season.

After leaving the club in 2015, Distin retired one year later, having made more Premier League appearances than any other foreign outfield player.

Baines’ spell at Everton cemented his reputation as one of the league’s best full-backs.

He represented the club with distinction until announcing his retirement in July 2020. He appeared 420 appearances for Everton, scoring 39 goals.

In September 2020, Baines returned to Everton as a Professional Development Coach. 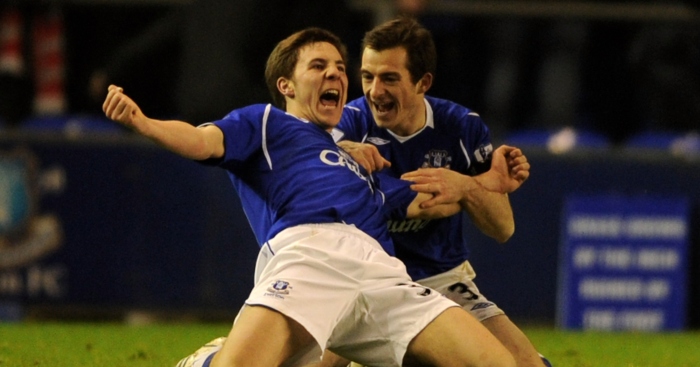 Neville made almost as many appearances for the Toffees as he did for Manchester United during an illustrious career.

Given the captaincy by David Moyes, Neville stayed with the club until 2013. During his last year at Everton, he completed his UEFA B Coaching Licence and went on to coach at Manchester United and Valencia after his retirement.

In January 2018, Neville was appointed manager of England’s women’s team. After leading the Lionesses to fourth place at the 2019 World Cup, Neville will leave the role in 2021.

Coleman currently captains both Everton and the Republic of Ireland national team.

Having joined the club in 2009, Coleman has made 324 appearances for Everton and has widely been regarded as one of the league’s best full-backs during this time.

With the hair and appearance of a Lego figurine, Arteta proved another inspired buy by David Moyes.

Spending seven years at the club, making 209 appearances and 35 goals, Arteta moved to Arsenal in August 2011 and stayed in north London until his retirement in 2016.

He was appointed assistant coach at Manchester City soon after and worked closely with Pep Guardiola. Arteta was appointed Arsenal manager in 2019, where he has made an impressive start to rebuilding the club.

His replacement 10 years ago forged a different path. Having joined Everton after his goalscoring exploits for Leeds United, Beckford scored 10 goals in his solitary season on Merseyside before winding down the divisions.

He spent a short spell at Bury before retiring in 2019 and has subsequently started a burgeoning career as a pundit.

An Everton legend, Cahill’s all-action performances and corner flag battering celebrations have made the Australian a Premier League icon.

Known for his adept heading ability, Cahill spent eight years at Goodison and scored 68 goals in 278 appearances for the club. Upon leaving, Cahill wound down his playing days in America, China, Australia and India, via a short-lived spell at former side Millwall. 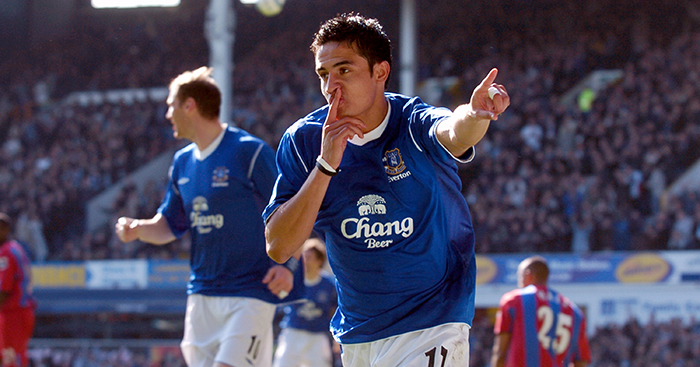 Osman spent his entire career with Everton after brief loan spells at Carlisle and Derby.

Making 433 appearances and scoring 57 goals over a 16-year stay at the club, Osman became a fan’s favourite and even made two appearances for England during the reign of Roy Hodgson.

After his retirement in 2016, Osman carved out a new career as a football pundit and analyst. He is now a regular guest on Sky Sports News show ‘Premier League Daily’ as well as featuring on the radio for the BBC World Service and Radio City in Liverpool.

His replacement against Liverpool, Bilyaletdinov, had a much shorter spell at Goodison. He spent most of his time on the fringes of the first team and departed for Spartak Moscow in 2012. After his departure, the winger spoke out by criticising their tactics and lack of creativity.

He was last seen playing for Lithuanian side FK Trakai in 2018.

Affectionately called the ‘Yak’ during his time in England, the Nigerian striker was prolific for a number of Premier League clubs.

Having been a fan’s favourite at Portsmouth and Middlesbrough, Yakubu moved to Everton in 2007 and scored 25 goals in 82 league appearances for the club.

After a loan spell at Leicester, Yakubu moved to Blackburn in summer 2011 and had a nomadic career thereafter – taking in spells in China, Saudi Arabia and Turkey.

Yakubu retired three years ago, and was last in the news following the announcement he will open the 2020 SBC Digital Summit Africa, a betting and gaming event. 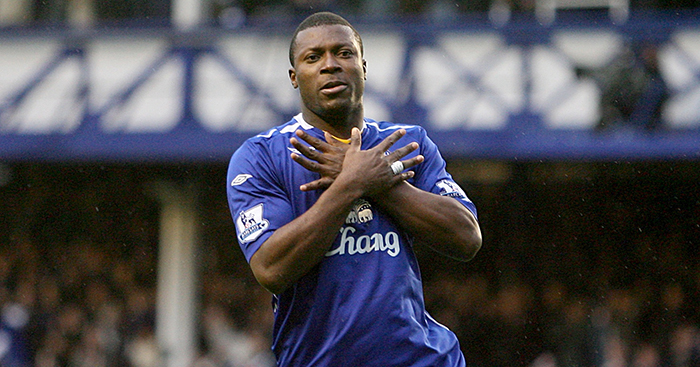 It wasn’t until Liverpool signed Allison that they properly replaced Spain goalkeeper Reina.

Having left Anfield in 2014, Reina has gone on to represent some of Europe’s elite clubs including Bayern Munich, Napoli, Milan and Lazio.

Reina was last seen by domestic audiences floundering for Aston Villa last season before making the switch to the Italian capital.

Infamous among Liverpool supporters, Konchesky became the poster boy for the failures of Roy Hodgson’s reign.

Sarcastically cheered by when substituted in a home defeat to Wolves, Konchesky was quickly loaned out to Nottingham Forest in 2011 before permanently moving to Leicester in the same summer.

After a solid spell in the east Midlands, Konchesky’s career wound down into non-league, where he represented Billericay Town and East Thurrock United. He is now the assistant manager to Jamie O’Hara at Billericay.

In his two years at Liverpool, Kyrgiakos is probably best remembered for being used as an emergency striker by Hodgson.

He was sold to Wolfsburg in 2011 and, via a brief loan spell at Sunderland, the Greece international retired after two appearances for Australian side Sydney Olympic.

Kyrgiakos has seemingly dropped off the face of the earth since.

Liverpool legend and the most Scouse looking person alive, Carragher has enjoyed the spotlight since his 2013 retirement.

The former defender soon made his way over to Sky Sports and regularly fronts their Monday Night coverage alongside Gary Neville, in which both men talk about football very earnestly.

Carragher also has a regular column in the Daily Telegraph.

The Slovakia international made 320 appearances during his nine years at Liverpool, scoring 18 goals.

The defender soon moved to Fenerbache, spending three years in Turkey before an extremely short-lived spell with Atalanta.

Skrtel returned to Turkey with Istanbul Basaksehir in 2019, where he currently plays.

Meireles impressed during his sole season at Liverpool, becoming the strangest winner of PFA Fans’ Player of the Year in recent history.

However, the midfielder asked to be transfer listed in 2011 and moved to rivals Chelsea, where he won a Champions League winners medal.

He spent the final stages of his career at Fenerbache, helping the team to the Turkish championship in 2014, before randomly appearing on a Portuguese talent show living his best life while dressed as a pirate. Yes, really.

The Brazilian utility man became a cult hero among Liverpool supporters for his tireless commitment to the cause.

Spending 10 years at Anfield, Lucas was often treated as scbaapegoat figure but you cannot make 346 appearances for the club without doing something right. He left for Lazio in 2017, where he has similarly become loved by fans.

It seems incredible that N’Gog is in his thirties now. He’s finally retired, but we still can’t work out his career.

This man needs no introduction.

Gerrard is probably Liverpool’s most legendary figure of the 21st century, captaining the team to Champions League success in 2005.

After leaving the club in 2015, Gerrard played one-and-a-half seasons playing for LA Galaxy before retirement.

Gerrard currently manages Rangers after a handful of punditry appearances for Sky and BT. 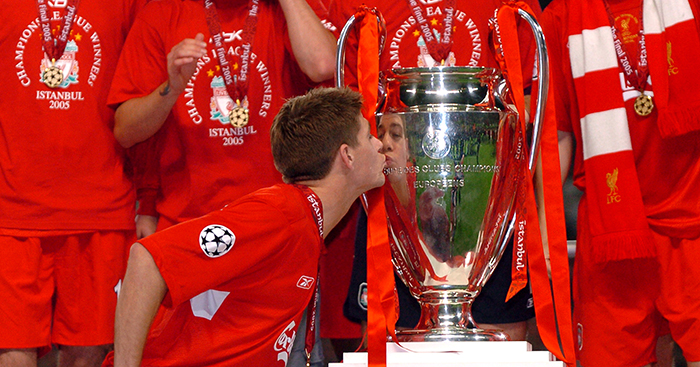 Cole’s time on Merseyside was brief and disappointing, but that shouldn’t mask the player he was in his prime.

After leaving the club, Cole had spells with Lille, West Ham, Aston Villa, Coventry and Tampa Bay Rowdies before retiring in 2018. He sent time on the coaching staff at Chelsea and currently works for BT Sport as a matchday pundit.

His replacement at Goodison, Ryan Babel, has had a nomadic career since leaving Liverpool in 2011 playing in Holland, Saudi Arabia, Spain and Turkey. Domestic audiences will remember his cameo in a doomed Fulham team, during which he looked like an action man that had been assaulted with a felt-tip pen.

The man who once made time stand still and scorer of one of the best World Cup goals of all time, it was slightly disappointing not to see prime Maxi turn out for Liverpool during this era.

However, he still did relatively well and scored 17 goals in 73 appearances before leaving for Newell’s Old Boys in 2012. He had a brief spell with Uruguayan club Penarol before returning to the Argentine side for a third spell in 2019.

His replacement, Milan Jovanovic, was one of Liverpool’s most forgettable signings in recent years. Regularly failing to even make the bench, the Serbian international returned to Anderlecht after one year at Anfield where he spent the rest of his career. He’s also responsible for arguably the most brilliantly sh*t moment in Premier League history.

By this point, Torres was months away from leaving Liverpool after a prolific spell with the club, which was followed by a less-than-prolific time at Chelsea (in terms of goals, albeit not necessarily trophies).

After a blink-and-you’ll-miss-it spell at Milan, Torres re-joined boyhood club Atletico Madrid, where he reached the Champions League final in 2016. He retired after a season in Japan with Sagan Tosu.