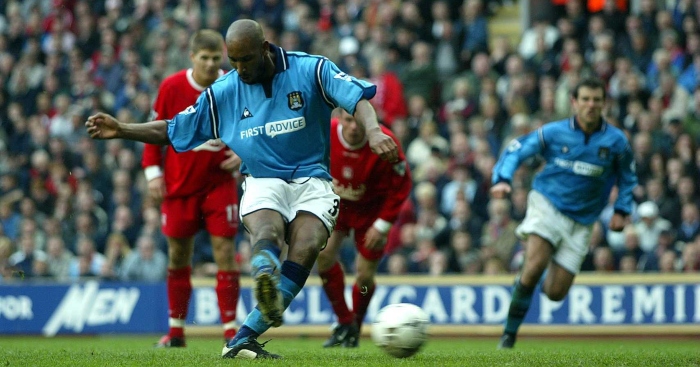 Despite Manchester City’s incredible success in recent years, they still always struggle when they play away against Liverpool.

The Blues have a woeful record at Anfield and their last victory at Liverpool came 16 years ago, when a Nicolas Anelka double secured a 2-1 win for City.

Dudek was Liverpool’s hero as they won the Champions League in 2005, but he lost his starting position to Pepe Reina and signed for Real Madrid in 2007.

The goalkeeper made just two league appearances for Madrid in four years, but he was still substituted to a guard of honour in his final appearance.

After retiring in 2013, he swapped the football pitch for the motor racing track, where he now competes in endurance races.

Carragher spent his entire career at Liverpool and retired in 2013 after making over 700 appearances for the club.

The defender then joined Sky Sports as a pundit, where he has developed a brilliant on-screen bromance with former enemy Gary Neville.

Traore was a regular for Liverpool in 2002-03, but he soon found his first team opportunities limited and signed for Charlton in 2006.

Hyppia spent 10 successful years at Anfield before joining Bayer Leverkusen in 2009. Following his retirement in 2011, the 46-year-old has managed Leverkusen, Brighton and FC Zurich with less success.

Riise earned cult hero status at Liverpool due to his knack of scoring iconic thunderbolts. After joining Roma in 2008, he later had spells in Norway, India and Cyprus before retiring in 2017.

The defender then began working as a football agent, and he joined Maltese club Birkirkara as a sports director in 2019 but resigned three months later.

Diouf flopped at Liverpool after joining the club in 2002,  and he later played for the likes of Bolton, Blackburn, Sunderland, Rangers, Doncaster Rovers and Leeds United.

The 38-year-old has got involved in several bitter feuds with Steven Gerrard, and he has completely burnt all bridges with the club.

“I can say today that the shirt that I regret wearing the most was Liverpool’s, because if I were to do that part of my career again, I would have gone to FC Barcelona or Manchester United. At the time, they wanted me too,” he told French outlet RMC.

Diouf is now running his own sports newspaper business in Dakar plus he working as a goodwill ambassador for the Senegalese government. A slightly ironic job title.

Since retiring in 2016, Heskey has assisted with the coaching at Bolton as well as doing media work for Premier League TV and Sky Sports.

Hamann played a key part in Liverpool’s Champions League win over AC Milan in 2055, and he scored in the penalty shootout with a broken toe.

The midfielder signed a pre-contract agreement with Bolton in 2006 before changing his mind and joining Manchester City instead.

Hamann was briefly Stockport County manager in 2011, and he is currently working as a pundit for RTE.

Gerard Houllier dubbed Cheyrou the “new Zidane”, but he failed to make an impact at Anfield and returned to France before retiring in 2012. He is currently working as PSG Ladies’ Sporting Director.

The Liverpool legend made over 700 appearances for the club before moving to America and signing for LA Galaxy in 2015. He then announced his retirement in November 2016.

Gerrard returned to Liverpool to manage their managed their under-18 team during the 2017–18 season, and he is currently impressing as manager of Rangers.

Murphy was voted the Liverpool supporters’ player of the season in 2003, but he joined Charlton a year later. The midfielder also played for Spurs, Fulham and Blackburn before retiring in 2013.

The 42-year-old has since established a career as a pundit with Talksport, and he recently recalled that game against Manchester City.

“I had a stinker that day, I have to say. I remember it well,” he told Talksport.

“Do you know what it was? Anelka had a point to prove.

“We had him on loan and he did great for us and the deal was all done, but Gerard Houllier changed his mind and we ended up signing El Hadji Diouf instead of Anelka – which didn’t turn out too well obviously.”

Owen swapped Anfield for the Bernabeu in 2004, but he failed at Real Madrid and returned to the Premier League with Newcastle a year later.

After Newcastle were relegated in 2009, the striker joined Liverpool’s arch-rivals Manchester United before retiring at Stoke.

Owen is now working as a pundit for BT Sport and you may have heard that he has a book out.

Baros started the Champions League final against AC Milan but joined Aston Villa in 2005 after three years at Anfield.

He later had spells with Lyon, Portsmouth and Galatasaray, and he is currently back playing in his native country with Banik Ostrava in the Czech Liga.

This was Schmeicel’s last ever away game as he retired at the end of the 2002-03 season. The goalkeeper has since worked in punditry and appeared on several different reality TV programmes.

Dunne spent nine years at City, where he won four of their Player of the Year awards and became club captain in 2006.

However, City’s takeover in 2008 saw Dunne get limited playing time, and he joined Aston Villa a year later before signing for QPR in 2013. The defender retired after being released in 2015, and he now works as a pundit for BT Sport.

10 – Richard Dunne scored 10 own goals during his Premier League career, more than any other player in the competition. Hapless. pic.twitter.com/grh1J8zu6l

Sommeil became the first City player to score a league goal at the City of Manchester stadium in 2003, but he never established himself in the team and was released in 2006.

The defender spent a year at Sheffield United then joined Valenciennes in France, but he was forced to retire after suffering a heart attack in training.

Distin was City’s player of the Year in 2002-03, and he went on to make over 200 appearances for the club before signing for Portsmouth in 2007.

He won the FA Cup during his first season at Fratton Park and later had spells at Everton and Bournemouth. The 41-year-old is now working as a strength and conditioning coach.

Wright-Phillips was a fan favourite at City, and he returned for a second spell with the club after joining Chelsea in 2005. The winger announced his retirement earlier this year after a spell in America with New York Red Bulls and Phoenix Rising.

“I was trying to hold on to [my career] for as long as possible,” Wright-Phillips said on Soccer AM.

“But over the last few weeks, I’ve decided it is time to be official and say: I’m officially retired.

His son D’Margio, 17, recently signed his first professional contract with Pep Guardiola’s side after coming through the club’s youth ranks. Feel old yet?

GOAL OF THE DAY

Barton had an impressive first two seasons at City but his off-field issues marred his time with the club, and he joined Newcastle in 2007.

Controversy followed Barton at QPR, Marseille, Rangers and Burnley before he retired and became Fleetwood Town manager in 2018.

The 37-year-old recently won the League One manager of the month award before appearing in court and pleading not guilty to a charge of assault.

Benarbia had helped guide the Blues back to the Premier League in 2002, but he announced his retirement at the end of the 2002-03 season.

Five days later he joined Al-Rayyan in Qatar and later played for Nadi Qatar before retiring in 2006. Benarbia now works as a consultant and presenter for Al-Jazeera Sports in Doha. 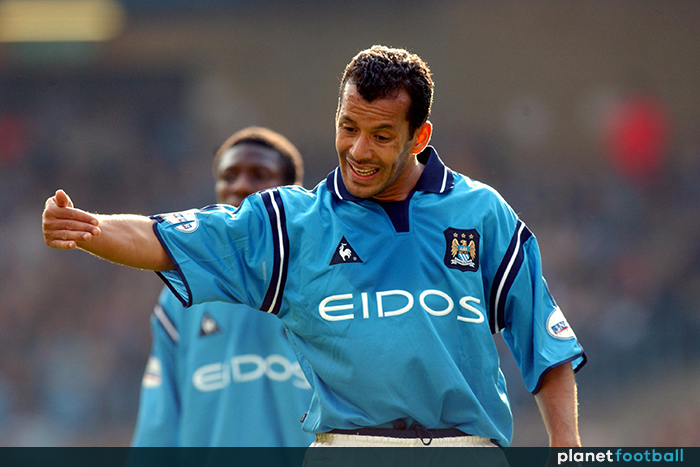 READ: ‘If only he’d joined earlier’: An ode to Ali Benarbia’s glorious spell at Man City

After leaving City in 2003, Horlock had spells with West Ham, Ipswich, Doncaster, Scunthorpe and Mansfield.

Since retiring, he has moved into coaching and is currently the academy manager of Needham Market and assistant manager of the Northern Ireland under-21 team.

Jensen spent just one season at City, but he was fondly remembered for scoring a spectacular volley against Leeds United in 2003.

He went on to play for Borussia Dortmund, Fulham and FC Copenhagen before retiring in 2009. The 45-year-old now owns a football talent management agency in Denmark.

FORGOTTEN GOAL: 16 years ago today a screamer from #MCFC full back Niclas Jensen vs Leeds.

As “Remarkable Goals by Fairly Unremarkable Players” go, this is a classic of the genre.pic.twitter.com/bHGpn6cIrO

Fowler had a difficult start to his City career and scandal surrounded his time at the club, but he was their joint top goalscorer in 2004-05.

The striker made a famous return to Liverpool in 2006 before retiring after spells in Australia and Thailand. In April 2019, Fowler signed a 2-year contract to become manager of Australian Hyundai A-League club Brisbane Roar.

Anelka finished as City’s top goalscorer in his first two seasons with the club before joining Fenerbache in 2005. The Frenchman returned to England a year later with Bolton and later signed for Chelsea.

After playing for 12 different clubs in his career, Anelka retired in 2015, and he is currently Lille’s youth striker coach.

Richard Dunne: In 25 years, Man City will be as big as Man Utd & Liverpool