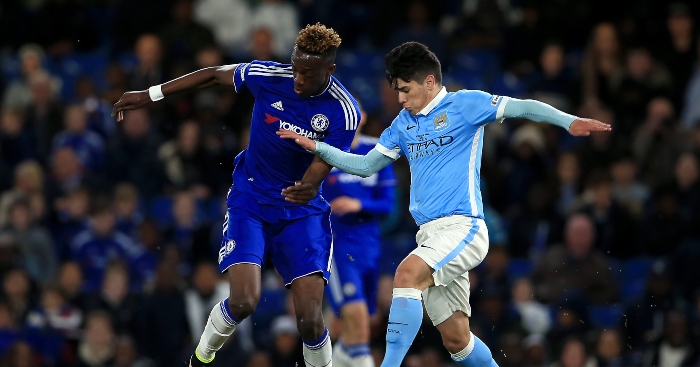 Frank Lampard has received plaudits for ushering in some of Chelsea‘s young talents, but it helps when you’ve got a crop as good as the class of 2016.

The Blues won the FA Youth Cup five years in a row between 2014 and 2018, with future first-teamers Andreas Christensen and Ruben Loftus-Cheek among those to feature in the earlier squads.

However, the 2016 winners are the most visible in the team being built by Lampard in the Premier League, and we’ve looked at happened to the players that brushed aside a Manchester City squad containing Jadon Sancho and Brahim Diaz with a 3-1 win at Stamford Bridge following a 1-1 draw away from home.

Baxter has not been one of the Chelsea players handed a first-team chance amid the transfer ban, but at 20 years of age he has time on his side.

The goalkeeper spent last season on loan at Yeovil Town, winning the club’s Player of the Year award but failing to prevent their relegation out of the Football League.

He is spending the current season at Ross County in the Scottish Premiership but has been unable to usurp first-choice stopper Ross Laidlaw at the time of writing.

The younger brother of former Blues midfielder Nathaniel was a rare bright spark in Ipswich Town’s relegation from the Championship last season.

He has stayed in the second tier with another loan move this year, joining Huddersfield Town, and is helping the Yorkshire club bounce back after a poor start to the season saw manager Jan Siewert replaced by Danny Cowley.

Chalobah started the recent wins over Stoke and Hull to help the Terriers climb out of the bottom three, and he will hope to parlay this season into an eventual Chelsea debut after being left on the bench by Antonio Conte during the 2018 FA Cup final.

The first name on this list to break through into the first team but not the last, Tomori scored Chelsea’s final goal against City’s youngsters in 2016.

He was handed his first-team debut by Guus Hiddink just a few weeks after the final, playing half an hour against champions Leicester City on the final day of the season, before spending time on loan at Brighton, Hull and Frank Lampard’s Derby County™.

The centre-back’s second Blues game came more than three years after his first, but he has followed it up with several more, adding his first goal for the club in the 5-2 win at Wolves.

Clarke-Salter also made his debut under Hiddink, playing 16 minutes in a 4-0 win at Aston Villa, but has yet to add to that sole league outing.

The defender has one other first-team appearance to his name, against Nottingham Forest in the 2017-18 League Cup, but has impressed enough on loan to earn England Under-21 recognition, even wearing the captain’s armband for the Young Lions at last summer’s European Championships.

An impressive spell at Vitesse might have left him hopeful of more Chelsea action this season, but instead he’s joined Birmingham City for the season, earning his first Championship minutes for the club in a 1-0 defeat to Wigan.

Another member of the loan army, it looked for a while like Dasilva’s breakthrough would only be a matter of time, but ultimately he left before getting his opportunity.

The full-back, whose brother Cole left Chelsea for Brentford in 2018 (Cole’s twin Rio was also briefly on the Blues’ books), spent the 2018-19 campaign on loan at Bristol City and opted to join the Championship side permanently.

After starting the opening day defeat to Leeds, he suffered a tibia fracture which looks likely to keep him out until the new year, with Robins manager Lee Johnson describing the news as “a big loss really for the squad and team”.

Scottish youngster Sammut was a curious case during his time at Chelsea, never playing for the senior side but only spending one stint out on loan – a 16-game spell at Falkirk last season.

After running down his contract over the summer, he moved to Sunderland to play under compatriot Jack Ross in League One.

The midfielder is still waiting for his Black Cats debut but has been featuring for their academy side in the early part of the season.

A Saudi Arabia international before his 20th birthday, Ali was one of many Chelsea youngsters to move on loan to Vitesse. However, unlike his peers, he opted to move to the Dutch club permanently in 2017.

The midfielder scored his first Vitesse goal last season, netting against Heerenveen in a game which also saw Clarke-Salter and former Chelsea goalkeeper Eduardo in action for the Eredivisie side.

However, his time in the Netherlands came to a close this summer as he made the move to Saudi champions Al-Nassr.

A starting place in the FA Youth Cup final at 18 tends to be the sign of a bright future. That might still be true of Christie-Davies, but if he’s successful it will be in red and not blue.

The Wales Under-21 midfielder was snapped up by Liverpool in 2018 but is still waiting for his first-team debut.

He was on the bench once last season, during the 2-1 FA Cup third round defeat at Wolves, and will hope to add his name to the growing list of youngsters called up to the Welsh senior side.

The second member of the 2016 squad to feature for Chelsea this season is also the second to play under Lampard at Derby County.

Mount scored 17 goals across loan spells with Vitesse and Derby, earning his first England senior call-up in the process, and has taken that form into his first full season in the Blues’ first-team.

Goals against Leicester, Norwich, Wolves and Southampton have made his latest international call-up feel like a no-brainer, and he’ll be pushing for a first start under Gareth Southgate in the upcoming double-header.

We already know a lot about Abraham, but it’s worth repeating just how impressive he has been this season.

Nine goals in 11 games, including his first-ever top-flight hat-trick and maiden Champions League goal. He’s already surpassed his tally from the last time he was a Premier League player, when he scored five goals on loan at Swansea in 2017-18.

Next up for the 22-year-old, who was outscored by only Teemu Pukki in last season’s Championship: a first England senior goal?

The final member of Chelsea’s front-line in that Youth Cup run hasn’t kicked on in the same way. Indeed, he isn’t even still an attacker.

Sterling, who played on the wing and up front when coming through Chelsea’s academy, has morphed into a right-back during his loan spells away from Stamford Bridge.

One such spell saw him impress at Coventry City last season, but he’s yet to impose himself as a first-team regular at Wigan after following in the footsteps of Chelsea team-mate Reece James, who shone with the Latics for the 2019-20 season.

England youth midfielder Maddox is still waiting for a breakthrough and is spending the current season on loan at League One side Tranmere Rovers.

Grant, who joined Chelsea before he’d even started secondary school, has been racking up minutes on loan at Plymouth Argyle in League Two.

Part of England’s successful Toulon Tournament squad in 2017, Ugbo is still waiting for his competitive Chelsea debut. After featuring in the pre-season friendly against Bohemians, he was sent out on loan to Roda in the Dutch second tier and has already scored five times.