Where are they now? Gary Neville’s Valencia humiliated 7-0 by Barca 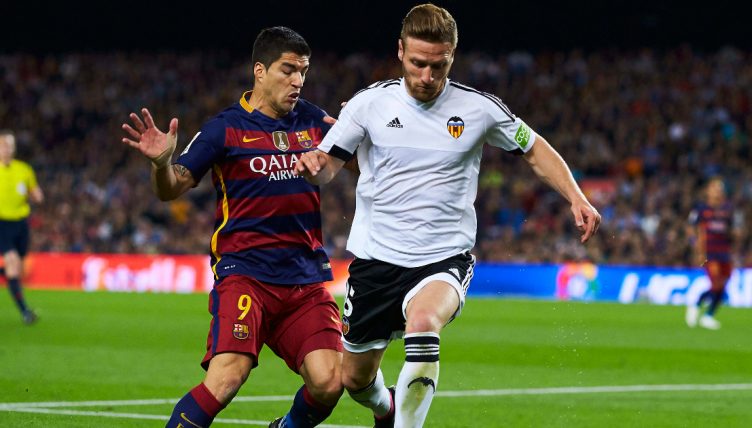 On February 3rd, 2016, ex-Manchester United defender and outspoken Sky Sports pundit Gary Neville brought a struggling Valencia side to the Nou Camp for the Copa Del Rey semi-final in his first managerial job.

Even the most experienced managers would dread facing a side containing Lionel Messi, Luis Suarez, Neymar and Andres Iniesta, so Neville can’t be blamed too harshly for losing, but shipping seven goals in the process was humiliating for all involved.

Remarkably, the seven Barcelona goals came from just two players, with Suarez scoring four and Messi scoring three, and the tie was over in the first leg before Valencia recovered to draw the second leg 1-1.

Neville lasted just four months in the role before being sacked in March 2016, and his stint was so bad that he has not taken another coaching job since.

Seven years on, we’ve taken a look at where the side he sent out to be slaughtered that day have ended up now, and there’s a surprising amount of quality within the team.

The Australian goalkeeper played just 21 games for Valencia before joining Brighton in 2017.

After over 120 appearances for the club, Ryan made a shock loan move to Arsenal in January 2021, and made one appearance before joining Real Sociedad on a free transfer.

In constant competition with Diego Alves and Jaume Domenech, Ryan was unlucky to lose his starting place when picking up a meniscus injury in September 2015, but was chosen over Domenech to play in the cup, and did not have his finest night between the sticks.

A right-back who made over 100 appearances for the club, Barragan had to spend an evening dealing with Neymar, and probably wished he stayed at home.

Barragan would go on to leave the club after five years that summer, joining Aitor Karanka’s Spanish revolution at Middlesbrough, but returned to Spain after just a season, joining Real Betis.

Now 34, Barragan currently turns out for Elche in the Spanish top flight, but his career really peaked at Mestalla.

Even before his Arsenal days, Mustafi would play the class clown role in embarrassing defeats.

The German World-Cup winner received a straight red card on the stroke of half-time for a foul on Messi, with the scoreline already at 3-0, making Neville’s job that much harder.

Mustafi then earned a £35million move to Arsenal that summer, where he initially started well, before a string of comical errors over the years meant he became regarded as a joke figure in his time in the Premier League.

After returning to punditry, Neville offered his insight into how Mustafi could improve at Arsenal in 2019 following yet another costly error.

“I had Mustafi at Valencia for three or four months. He’s committed, he’s really good in the air, but he needs someone alongside him who can pull him into position and hold him there,” Neville stated on Sky Sports.

“I think at the moment he hasn’t got a strong partner beside him. He had Otamendi at Valencia the year before I got there who did really well with him.

“If Arsenal are going to play him you need a strong partner beside him.”

Arsenal ended up signing David Luiz to partner him, in a move that ended as badly as it sounds on paper.

Mustafi left Arsenal in 2021, getting relegated with Schalke, before returning to the Valencian region with Levante, who currently sit bottom of La Liga.

Nightmare return to Stamford Bridge for David Luiz, who is sent off following Shkodran Mustafi's error 🔴

A colossal six-foot-four centre back signed from Braga, the Brazillian lasted just two seasons in a Valencia shirt, before being shipped out on loan across the continent.

Despite his size, he was never at the required level following his £9million move in 2015, and moved to Al-Ahly permanently in 2019.

Just months later, Santos returned to Europe with Rio Ave, where he still plies his trade.

The second of four full-backs in the starting XI, Gaya was once sought after by clubs across Europe, but remained committed to Valencia.

A product of the youth academy, Gaya is now the club captain, and with over 300 appearances for the club, is a legendary figure at Mestalla with 17 Spain caps to his name.

No one could have watched Cancelo play on the right-wing against Barcelona that day and pictured him becoming one of the best full-backs in the world years later.

After a difficult season, Cancelo would leave the club in 2017, joining Inter Milan on loan before moving to Juventus permanently.

Manchester City swapped him for right-back Danilo in 2019, and it is in Manchester where he has become a crucial player for Pep Guardiola on both flanks. Bet Valencia regret this one.

Cheryshev was brought in on loan from Real Madrid on deadline day in February 2016, and came on for Cancelo for his Valencia debut.

Cheryshev flitted between Villarreal and Valencia, and now 31, is a rotational winger at Valencia again.

A club legend, who later captained Valencia to the Copa Del Rey in 2019, Parejo made nearly 400 appearances for the club and established himself as one of the best players in Spain.

After falling out with owner Peter Lim, Parejo made one of the most shocking transfers in La Liga, moving on a free transfer to local rivals Villarreal.

This deal caused significant anger amongst the Valencia fanbase, and Parejo went on to lift the Europa League at the Yellow Submarine.

His loan from Benfica was made permanent in 2015, and a season later, Barcelona paid £35million for the Portuguese Euro winning midfielder.

Gomes was one of many Barcelona signings over the years who did nothing of note, and moved on to Everton in 2018, where he has also been very hit and miss.

The Brazilian midfielder joined Valencia on an initial loan with an option to buy in 2015, but after a disappointing season, Valencia chose not to keep him, and he moved on to join Nice, and is currently on loan at Palmeiras.

Danilo was hooked for Sofiane Feghouli in the 33rd minute of the game, and the Algerian winger would also leave at the end of the season, and went on to spend time at West Ham before joining Galatasaray in 2017.

Neville’s first signing as a manager, the Brazilian left-back joined on loan from Atletico Madrid and made his debut as a left winger against Barcelona, and was substituted for centre back Ruben Vezo after Mustafi’s red card.

Siqueira would play for Valencia for 18 months before leaving as a free agent and subsequently retiring.

Vezo joined Levante after a loan spell at Granada, reuniting him with Mustafi as a centre-back pairing destined for doom.

The Spanish international forward was a popular figure at Valencia, where he made 220 appearances, before joining Marcelo Bielsa’s Leeds United – beating Rio Ferdinand’s long-held record to become the Yorkshire outfit’s club-record signing – in 2020.

Although not prolific, the 30-year-old’s pace and skill made him a valuable asset for Valencia, and he scored in the 2019 Copa Del Rey final win over Barcelona, etching his name into Valencian history.