Where are they now? Germany’s U21s that beat England in the 2017 Euros 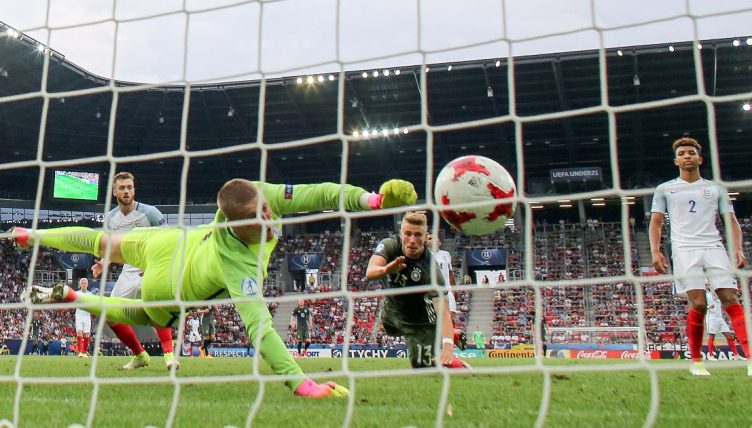 England had a squad stacked with talent for the Under-21 Euros in Poland back in 2017, but they couldn’t make it past the semi-finals, losing a penalty shootout to Germany after a 2-2 draw.

The likes of Jordan Pickford, Ben Chilwell, James Ward-Prowse and Tammy Abraham turned out for Aidy Boothroyd’s Young Lions on that occasion and have gone onto make the step up with senior caps under Gareth Southgate.

But what became of that young Germany side, who went on to win the tournament? We’ve taken a look at what they’re doing four years later…

Named man of the match in the victory over England, having saved penalties from Nathan Redmond and Abraham in the shootout, the comparatively experienced 22-year-old went on to keep a clean sheet in the 1-0 win over Spain in the final.

But that was to be his last appearance on the international stage, having received no caps in the senior set-up.

At club level, he moved from second-tier Kaiserslautern to Bundesliga side Hamburg that summer but suffered relegation and subsequently fell behind in the pecking order.

Now 26, the goalkeeper completed a surprise £300,000 move to French giants Lyon last summer, but he’s yet to make an appearance and is back-up to ever-present No.1 Anthony Lopes.

Having been named in the team of the tournament, as well as being a silver medallist with Germany’s 2016 Olympic team, right-back Toljan moved from Hoffenheim to Borussia Dortmund later that summer.

The defender remains on Dortmund’s books today but hasn’t featured for the club since a handful of appearances in his debut 2016-17 campaign.

He’s since been loaned out to Celtic, where he played a peripheral role in their domestic double in 2018-19, and is currently with Serie A side Sassuolo on a second successive loan.

Kehrer, meanwhile, now stars in PSG’s backline after moving from boyhood club Schalke in 2018. He’s now a regular for Joachim Low’s senior side.

Able to slot in as a centre-back or a defensive midfielder, Jung featured prominently during the 2017 Under-21s Euros but that’s been it when it comes to his international career with Die Mannschaft.

He’s now into his sixth season at Hamburg and an unthinkable third straight year in the Bundesliga II. Currently 2nd, this might just be the year they make their return to the top-flight.

Kempf represented his country at six youth levels, from Under-16 to Under-21, but he’s never received a senior call-up.

During his time at Freiburg, and now Stuttgart, he’s flitted between the top two tiers in recent years. The German Roger Johnson.

This tournament for the Under-21s came after Gerhardt’s one and only senior cap for Low’s senior side, a 0-0 draw in a friendly against Italy in November 2016.

He’s established himself as a midfielder in his club career with Koln and Wolfsburg – having made over 100 Bundesliga appearances since 2014 – but he featured at left-back in this tournament and was named in the team of the tournament alongside Toljan on the other flank.

He continues to turn out for Wolfsburg in the Bundesliga, now into his fifth year at the Volkswagen Arena.

Another steady Bundesliga presence, Haberer has made over 100 top-flight appearances for Freiburg since he joined them from Bochum in 2016.

He’s never received a senior international cap, and ongoing injury issues have seen him become a marginal figure this season.

Extra-time replacement Kohr has racked up well over 150 appearances in the Bundesliga, as something of a journeyman between Bayer Leverkusen (twice), Augsburg and now Eintracht Frankfurt. Like Haberer, he has no senior international caps for Germany.

A month before Germany’s World Cup triumph in Brazil, Arnold made his senior Germany debut at the age of 19 with a 14-minute cameo in a 0-0 draw with Poland.

But the midfielder wasn’t selected in the final 23-man squad and hasn’t had another cap since, although he continued in the Under-21s in the following years.

A proper one-club man, Arnold is now into his 10th Bundesliga season at Wolfsburg after graduating from their academy during the 2011-12 campaign, when he became the club’s youngest-ever player at 17 years, five months and 30 days.

He might not have had the international career some expected, but he can strike a ball alright.

Look at that swerve! 🌪

Max Arnold changed the laws of physics when he produced this for Wolfsburg ⚡️#BundesligaIsBack pic.twitter.com/j8S0yBXdCv

Having done well at Freiburg, Borussia Dortmund paid a reported €20million to sign Philipp shortly before the 2017 Under-21 Euros got underway.

“We are happy that we have secured the transfer of Maximilian Philipp, who is highly sought after both here in Germany and abroad. He is versatile and can play as an attacking midfielder, he has a good shot and he has a fantastic future ahead of him,” Dortmund director Michael Zorc said at the time.

But he never quite made the grade at the Westfalenstadion, scoring 11 goals in 51 appearances in two seasons at the club. In 2019 he was sold to Dynamo Moscow.

Once a highly-rated wunderkind of the Bundesliga, Meyer was handed his Germany debut as an 18-year-old against Poland shortly before the 2014 World Cup.

Only four further national team appearances followed, but he’d shown enough about himself at Schalke for there to be plenty of buzz when he arrived at Crystal Palace in the summer of 2018.

For whatever reason, it just never worked out for Meyer at Selhurst Park, and he was dropped to the Under-23s before leaving the club by mutual consent in January. Koln picked him up as a free agent shortly afterwards.

The 2017 Under-21 Euros came after Gnabry put his injury setbacks at Arsenal, and wasted six months under Tony Pulis at West Brom, behind him.

Having started to consistently realise his potential with a fine season at Werder Bremen, Bayern Munich announced his signing just a couple of weeks prior to Germany’s Under-21s victory over England.

He continued to impress the following season on loan at Hoffenheim and hasn’t looked back since joining the first-team set-up at Bayern.

Gnabry looks set to win a third consecutive Bundesliga title this season, and proved a pivotal player in last term’s treble triumph, scoring nine goals in the Champions League – including four in one match against Tottenham to earn a rare 10/10 from l’Equipe. We’re sure Pulis had his reasons, though.

Bayer Leverkusen attacker Amiri has been capped five times by Low since making his debut in 2019.

Having featured alongside Toljan, Meyer, Gnabry, Julian Brandt and Leon Goretzka as Germany won Olympic Silver in Brazil in 2016, Selke continued to lead the line for the youth side for the following year.

The striker had featured for RB Leipzig as they rocketed up the leagues and established themselves as a Bundesliga force before he moved to Hertha Berlin in 2017.

Selke was once described as a “young Miroslav Klose” and described Mario Gomez as his idol, but he’s never quite emulated those enough for a senior cap. He’s now at Werder Bremen, on loan from Hertha.

He scored Germany’s opener against the Young Lions that night, while his second-half substitute Platte scored their 70th-minute equaliser shortly after coming on. The forward is currently turning out for Darmstadt in the Bundesliga II.

Seven players who could win their first caps: Gil, Watkins, Musiala and more