Where are they now? Mourinho’s treble-winning Inter from 2010 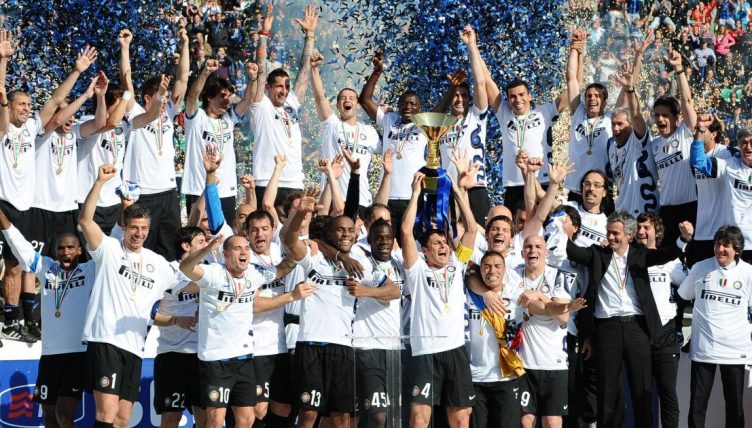 In 2021, Antonio Conte led Inter Milan to their first Scudetto in 11 years, looking set to end Juventus’ nine-year stranglehold at the top of Serie A.

There were plenty of ups and downs since their last league title, delivered by Jose Mourinho as part of the club’s legendary 2009-10 treble-winning campaign.

Claudio Ranieri’s Roma had pushed Inter all the way in Serie A, with the club’s fifth consecutive league title not confirmed until their tense 1-0 win away at Siena on the final day of the season. Here’s who was in Mourinho’s XI for that crucial win that day, and what they’re doing today.

The former Brazil international remained at the San Siro until 2012, and left after seven years and exactly 300 appearances between the sticks for the Nerazzurri to join Queens Park Rangers, replacing Leeds-bound Paddy Kenny after Mark Hughes’ side stayed up by the skin of their teeth.

But the Hoops couldn’t stave off relegation for a second season, and after the drop Cesar went on to join Benfica, following a short stint on loan at MLS side FC Toronto.

After winning three Portuguese titles, he briefly moved back to boyhood club Flamengo and made two appearances back in Brazil before announcing his retirement in 2018.

The Brazilian’s career undoubtedly peaked with Inter’s treble in 2010, and it was to be a sharp fall from there – five months after lifting the Champions League trophy, his reputation was ripped to shreds by Gareth Bale.

After a year to forget on the periphery at Manchester City in 2012-13, Maicon returned to Italy, and made 69 appearances in three seasons with Roma.

He only retired last year, at the age of 40, after a short stint with San Marino-based lower league side Tre Penne.

We still think about the night Bale did this to Maicon… 😩pic.twitter.com/85AqIoHVQT

Like his compatriot Zanetti, Samuel was a stalwart of Inter’s five successive Scudetto wins between 2005 and 2010, having previously turned out for Roma during their 2000-01 title win.

He followed in the footsteps of the likes of Alessandro Nesta, Paulo Maldini and Fabio Cannavaro in being named the Serie A Defender of the Year by the Italian Footballers’ Association in 2010.

In 2019, he enrolled in a UEFA Pro Licence course alongside Andrea Pirlo and Luca Toni, going on to serve as Lionel Scaloni’s assistant as Argentina triumphantly lifted the Copa America and World Cup.

Cult hero Materazzi, aka ‘Matrix’, leaves an inimitable legacy at Inter, having been one of Mourinho’s trusted lieutenants in the club’s historic treble-winning campaign.

He only made 11 appearances the following season, and retired after his contract expired in 2011, before making a brief return to the pitch as player-manager of Indian Super League side Chennaiyin in 2014.

The 47-year-old continues to represent his old club with media appearances to this day.

The eternal Argentinian, who barely seemed to age a day over the course of his 19 years and 858 appearances for Inter, eventually hung up his boots in 2014.

Inter officially retired the No.4 shirt to pay tribute to the club legend, who has served as their vice-president ever since he retired.

One of Zanetti’s finest moments came in the final-day 1-0 victory over Siena, with a sensational run and through ball to play in Diego Milito for the match-winner.

He was recently seen at the Lusail Stadium in Qatar to celebrate Argentina winning the World Cup.

Brazil-born Italy international Motta fell down the midfield pecking order during Ranieri’s tenure at Inter, and was allowed to leave for PSG in January 2012.

Motta became one of the newly-minted French giant’s key players as they began to establish themselves as a force again in France, playing a prominent role in the first five Ligue 1 titles of the Qatar Sports Investment era.

He retired in 2018 after making 232 appearances for PSG, and soon went on the same coaching course as Samuel and Pirlo, before a brief stint in charge of Genoa in 2019. Motta led them to just two wins from 10 games and was sacked after two months in charge, and is now in charge of Serie A side Bologna after a more impressive spell in charge of Spezia.

His substitute against Siena, Pandev, went on to play under him at Genoa, and was still going strong there, well into his late thirties. An Indian summer saw Pandev score the match-winning goal against Georgia that saw North Macedonia qualify for their first-ever major tournament, Euro 2020.

Pandev only left Genoa in January, and spent the final months of his career with a half-season stint at Serie B side Parma. He retired after their midtable finish.

After 10 years at Inter, having made over 400 appearances, Cambiasso signed for newly-promoted Leicester City in 2014 and became a fan-favourite at the King Power, named the Foxes’ Player of the Year as they achieved a great escape against relegation in his one and only season there.

When he turned down a contract renewal offer, turning down the chance to reunite with his old Inter boss Ranieri, he probably didn’t envisage that his replacement N’Golo Kante would transform them into title-winners.

But he’d win silverware himself, having seen out his playing career winning back-to-back Greek titles with perennial champions Olympiakos.

Cambiasso has since completed his UEFA A Licence but is yet to take up a position as a coach.

Balotelli was still a highly-rated teenager during Inter’s last Scudetto win, scoring nine goals in 26 Serie A appearances in 2009-10 before he turned 20 and reunited with Roberto Mancini at Man City that summer.

The striker went on to tee up Sergio Aguero for arguably the most famous Premier League goal in history, and starred for Italy as they made it to the Euro 2012 final, but it was swiftly downhill from there.

He rekindled some of that early magic in stints at Milan and Nice, but failed to do so at Liverpool and Milan (second time around), and is now turning out for Swiss Super League club Sion after a nomadic few years in France, Italy and Turkey.

Once Inter had a 1-0 lead to protect, Mourinho wisely replaced young Balotelli with the comparatively level-headed Stankovic. The Serbian legend retired in 2013 and is now in charge of Sampdoria, having been appointed as the Serie A club’s manager after a three-year stint in charge of boyhood club Red Star Belgrade.

It was 🔟 years ago today the Inter Milan midfielder scored a halfway line volley past Manuel Neuer in the Champions League! 🤩pic.twitter.com/ZBbysGLUfO

Sneijder was at the absolute peak of his powers, having played a major role in Inter’s treble win, while he came close to completing a perfect year later that summer as the Netherlands finished runners-up at the World Cup.

But he struggled to maintain those standards after Rafael Benitez arrived as Mourinho’s successor, and in January 2012 – when he was still just 28 years old – he moved to Galatasaray. He spent four and a half seasons with the Turkish giants, and won two Super Lig titles in Istanbul.

Stints at Nice and Qatari side Al-Gharafa followed before his retirement in 2019.

Former Romania international Chivu retired from playing in 2014, but remains with Inter, and is currently coaching their Under-19s.

Winning two trebles in successive seasons with Barcelona and Inter, Eto’o wasn’t actually all that prolific in 2009-10, scoring just 16 goals in all competitions in his debut season in Italy.

He was considerably more prolific in his second season, as things started to decline around him, scoring 37 goals in all competitions as Inter won the Coppa Italia and finished as runners-up to Milan.

A nomadic career followed as he played well into his late thirties, turning out for seven further clubs including Anzhi Makhachkala, Chelsea, Everton, Sampdoria and Qatar SC before he retired in 2019.

In post-retirement, Eto’o is now the president of the Cameroonian FA. He predicted Cameroon would win Qatar 2022, which unsurprisingly didn’t come true, but he also predicted Morocco would make it all the way to the final – and he wasn’t far off, to be fair.

The Argentinian striker captured lightning in a bottle in Inter’s legendary 2009-10 campaign, seemingly possessed by the spirit of his lookalike, fellow scrappy sporting hero Rocky Balboa.

Not only did Milito score the match-winning goal that wrapped up the Scudetto at Siena, but the only goal of the game in the Coppa Italia final against Roma, and both goals in the Champions League final against Bayern.

Having grafted with a fine goalscoring record at Genoa and Real Zaragoza, the Argentinian took his opportunity at a big club with both hands, scoring 30 goals and winning the treble in his debut season at Inter.

He’d only win a few further trophies at Inter – the 2010 Italian Supercoppa, the 2010 Club World Cup and 2010-11 Coppa Italia – but that one unbelievable year places him in Inter’s hall of fame for life.

Milito retired in 2016 after seeing out the last years of his playing career back in Argentinian, with his beloved boyhood Racing Club. He later served as their sporting director between 2019 and 2020.