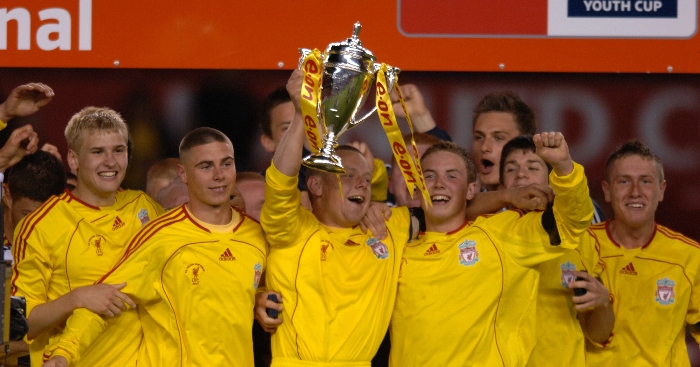 Liverpool’s talented youngsters won the FA Youth Cup in 2019 – but what became of their team that last lifted the trophy back in 2007?

After losing 2-1 in the first leg of the 07 final against Manchester United, Liverpool won 1-0 at Old Trafford and lifted the trophy after prevailing on a penalty shootout.

Only two members of that squad made a first-team appearance for the Reds and here’s what they are all up to now.

Roberts was released straight after the 2007 final triumph and moved to Bangor and Weymouth, before joining Aberystwyth Town.

The goalkeeper is now playing for Airbus UK Broughton in the Welsh Premier League.

Darby played six first-team matches for Liverpool, including appearances against PSV Eindhoven and Fiorentina in the Champions League.

The right-back was released in 2012 and moved to Bradford City, where he was a part of their fantastic run to the League Cup final in 2013.

Sadly, he was forced to retire at 29 after being diagnosed with motor neurone disease and has since set up his own charity with the aim of finding a cure for the condition.

“It is a devastating diagnosis, but I can’t change that,” Darby told the Daily Mail in 2019.

"It’s a place which has a special place in my heart and I’ve got great memories of being here."

Stephen Darby returned to the Academy to receive a cheque for more than £4,100 for @DarbyRimmerMND, raised by staff and players on a walk up Snowdon last year 👏

Burns was also released in the summer of 2007, moving onto Bolton’s academy.

The 31-year-old has since drifted into non-league, with spells at Newport County, Guiseley and Vauxhall Motors, and he was last seen playing for Widnes.

While he’s now playing as a defensive midfielder, Spearing played in defence for Liverpool’s youth team.

He is the standout success story from this group of players, as he made 55 appearances for the first team and started in the 2012 FA Cup final.

Spearing fell down the pecking order under Brendan Rodgers, but he has forged an impressive career with Bolton and Blackpool.

“I don’t have one regret,” he told the Times of his time at Anfield. “I played in every competition for the club and I did everything I had ever dreamt of doing. I will always look back and think, ‘What a time that was.’”

Threlfall scored the winning goal and the decisive spot-kick at Old Trafford, and the left-back was tipped to be a future England regular.

But he never made a first-team appearance for Liverpool and joined Bradford City in 2012 after various loan spells away from Anfield.

While England were playing in Euro 2016, the 31-year-old was signing for semi-professional club Marine, but he retired a few months later.

In 2007, the Daily Mail said this would be England's EURO 2016 starting XI… pic.twitter.com/iCeDZb8cBw

Barnett failed to make the grade at Liverpool and joined fellow Merseyside club Tranmere Rovers in 2008.

The midfielder went on to make over 100 appearances for Accrington Stanley before playing for AFC Telford United and Marine.

In July 2017, he graduated from the University of Salford with a degree in physiotherapy to prepare for a career after football.

The midfielder was deemed surplus to requirements by Liverpool and got sold to Shrewsbury in 2008.

A move to Accrington Stanley followed and Ryan and has since spent time at Scunthorpe United, Chesterfield and Fleetwood Town.

He had two seasons at Blackpool, where he captained the side during the 2017-18 campaign, but turned down a new contract at the Seasiders to join Rochdale in 2019.

Woodward never made a first-team appearance for Liverpool and became a coach at Connah’s Quay Nomads academy after hanging up his boots.

Flynn was unable to break into the Liverpool first team and the midfielder signed for his former youth club Falkirk on a permanent deal in 2009.

He returned to England two years later with Sheffield United and became a regular at Bramall Lane. He then moved to Oldham Athletic in the summer of 2016 before joining St Mirren in 2018.

We are sorry to confirm that Ryan Flynn is set for a lengthy spell on the sidelines after suffering a cruciate ligament injury in Wednesday’s draw with Hamilton.

We wish Ryan all the best in his recovery. pic.twitter.com/GHl7AjNw70

The winger was an integral part of Liverpool’s success, but a long list of injuries hampered his progress and eventually led to his release at the end of the 2008-09 season.

“It’s been tough. I’ve had a lot of bad injuries, seven operations, but I’m ready to go again,” Putterill said in 2010.

“I’ve had a fractured spine, a hip reconstruction, cartilage in my knee, hernia operation, quite a few. I fractured my spine when I was playing for England Schoolboys, the under 15s, against Ireland.

“I jumped up for a header and my feet came from under me. Before I knew it my spine had gone from a knee in my back. I was very worried, it paralysed me for about 20 minutes.”

Putterill tried to rebuild his career in the lower leagues with Accrington Stanley and Rochdale, but he is currently without a club.

The attacking midfielder joined Liverpool in 2007 from Falkenbergs in Sweden but failed to make any first-team appearances during his time at Anfield.

Ajdarevic joined Leicester City in 2009 and has since had spells in Belgium and Greece but is now playing for Djurgardens IF in the Swedish top division.

Irwin was released by Liverpool in 2011 and had spells in Holland, Finland and Denmark before joining Northern Premier League side Marine in 2018.

Lindfield was a prolific goalscorer at youth level but had to drop down the Football League ladder after leaving Liverpool in 2009.

The striker has played for 13 different clubs over the last 11 years and recently joined Runcorn Linnets in the Northern Premier League Division One North West.