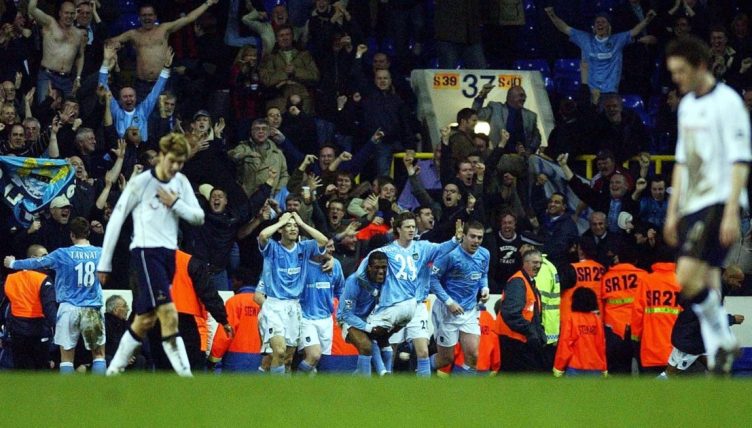 Manchester City completed one of the most famous comebacks in English football history back in February 2004.

Facing Tottenham Hotspur in an FA Cup Fourth Round replay, City found themselves 3-0 down at the break with Joey Barton getting himself sent-off to add to Kevin Keegan’s problems.

But the schizophrenic nature of Manchester City pre-takeover did have its upsides.

Capitalising on their opponent’s vulnerabilities, City scored four times in the second-half to, somehow, win the game 4-3 and create lifetime memories for those away fans who resisted the temptation to leave at half-time.

We’ve taken a look at what the City XI who played in that remarkable match at White Hart Lane are up to these days.

Arason made his City debut at White Hart Lane, deputising for cup-tied David James, and Keegan admitted that he’d never seen him play prior to the Spurs match.

The goalkeeper would have been forgiven for contemplating a career change at half-time.

But Arason made a memorable double save after the interval, tipping Christian Ziege’s free-kick onto the bar before pawing Gustavo Poyet’s rebound away.

He only made one further appearance for City and went on to join Norweigan side Valerenga in 2004. Arason retired, aged 36, in 2011 after spells in South Africa and Belgium.

Speaking about his White Hart Lane heroics in 2017, he said: “I let in three goals in the first half of my first game so I was shocked. We just tried to win the second half for pride.

“I was a bit annoyed that I let in one of the free-kicks in the first half so I got the chance to make some saves in the second and luckily they helped us through the game.

“You never believe something like that can happen when you’re away from home and down to ten men so to go and score four goals and get the win was an incredible achievement.”

Now a lawyer back in Iceland, Arason will always be fondly remembered by City fans for his contribution to that comeback win.

Thanks to @StuBram2 for nominating this as I’d totally forgotten it.

Do FA Cup goals live longer in our memories? pic.twitter.com/4SDKc0jIPv

Sun Jihai became a cult hero at City for his committed performances and quiet competence at right-back.

The China international spent six years in the blue half of Manchester, making 130 appearances for the club, before a brief spell at Sheffield United.

After winding down his career back in China, the defender retired in 2016 and co-founded his own sports data company called HaiQui [HQ] Sports.

Starting the business during his year with Beijing Renhe, Jihai created a company aimed that provides sports media, technology and “datatainment”.

As of early 2021, Jihai is thought to be a multi-millionaire worth £20million. Fair play.

Known as the king of Premier League own goals, Dunne was a mainstay of the City defence throughout the 2000s.

The Republic of Ireland defender played 352 times for City before becoming an early casualty of the Sheikh Mansour revolution and joining Aston Villa in 2009.

Dunne remained a solid top-flight centre-back for another three seasons before dropping into the Championship and helping QPR win promotion in 2014.

After retiring a year later, Dunne has appeared semi-regularly as a BT Sport pundit and has won praise for his insightful and measured contributions on-screen.

Distin was in the middle of his third of 15 successive Premier League seasons, which is the most of any foreign player in the league’s history.

After leaving City for Portsmouth in 2007, Distin lifted the FA Cup before spending six years at Everton that confirmed his position as one of the most underrated defenders in the division.

He finished his career with Bournemouth in 2016. He is now a strength and conditioning coach and football consultant.

Tarnat played at Bayern Munich until 2003, when he left Germany to join Keegan’s band of liquorice allsorts at Manchester City.

The left-back made 32 Premier League appearances during his single season in England before returning to his homeland one year later.

He ended his professional career at Bundesliga side Hannover in 2009 and currently works as a youth coach at Bayern.

Having played for City in both the second tier and Premier League across two spells, Wright-Phillips became a hero for the City supporters and an emblem of the rapid transformation of the club.

“The realisation kicked in for a lot of people the day after I went back as there was talk about Robinho signing,” he told The Sun back in 2019.

“Within 24 to 36 hours later I was training with him. You think, ‘The owners are serious about this, they really want to do it.’”

The former England international last played professional football for Phoenix Rising in 2017, but his son D’Margio has just scored his first professional goal at Stoke City.

This had the effect of pleasing grandfather Ian Wright and reminding us about the remorseless passage of time.

Ah, whatever came of the quiet and reserved Barton?

After getting himself sent-off against Tottenham for arguing with the referee, Barton was a lynchpin of the City midfield until leaving for Newcastle in 2007.

Barton also played his own, unique role in City’s 2012 title win by pressing the self-destruct button and punching Sergio Aguero while being sent-off for QPR.

He retired in 2017 and, after a successful spell as Fleetwood manager, is currently in charge of League Two side Bristol Rovers.

After making his name with Feyenoord and the Netherlands national team, Bosvelt arrived in Manchester in 2003 as City looked to build on a promising first season back in the top flight.

But the 2003-04 campaign was a torrid one for both player and club. As City went on a 14-match winless run in the league, plunging them into relegation bother, Bosvelt struggled to make his class tell.

He made still made 65 City appearances across two seasons before ending his career with Heerenveen in the Netherlands.

Bosvelt is now the Technical Director of Dutch second-tier side Go Ahead Eagles and has spoken fondly of his time in England.

“I stayed in the Midland Hotel for the first three and a half months. There was a lot to do and I took a lot of walks through the city. I liked the people and their mentality.

“After 15 years of playing in Holland it was a big adventure. I was 33 at that time and playing for the Dutch national team, but it was a big experience for me to go abroad. It was very exciting.”

After finishing his playing career, Sibierski briefly became a football agent with his brother. He is currently the Sporting Director of French side RC Lens.

Sinclair joined City from relegated West Ham in 2003 and scored the club’s first goal at their new stadium with a UEFA Cup strike against TNS.

Probably past his peak when he arrived in Manchester, Sinclair still 98 appearances across four seasons before joining Cardiff in 2007. He retired one year later and is now a regular pundit on talkSPORT.

Signed in the same summer as Sinclair, England international McManaman was another exciting winger who’d seen better days by the time he joined City.

That didn’t stop him being feted by Keegan after some impressive early performances but, by 2005, McManaman was being jeered by City supporters due to his poor performances and injury problems.

He retired after leaving the club in 2005 and is now employed as a pundit and co-commentator – most commonly with BT Sport as part of their Premier League and Champions League coverage.

In 2021, McManaman was classed as one of Manchester City’s five worst free transfer signings of all time. Go figure.

Many pundits tipped Keegan’s City for a tilt at the Premier League title on their top-flight return in 2002 – not least because they snatched Anelka from under Liverpool’s noses.

While the France international couldn’t match those preposterous expectations, he did score 43 goals in 105 City appearances and was a glamourous presence during a mediocre period in the club’s history.

Anelka left for Fenerbache in January 2005 but remained an elite player for the rest of the decade, particularly at Chelsea. He was most recently employed as sports director of French side Hyeres FC but left his post in May 2021.

His replacement at White Hart Lane wrote himself into Manchester City folklore with his 90th-minute winner to cap an incredible comeback.

Macken had been signed from Preston North End when City were in the First Division (ask your parents) and only managed to score seven goals in 51 appearances during his three years with the club.

But the striker remains fondly remembered for his exploits in February 2004, also scoring against United in the next round, and is now manager of Lancashire-based side Colne FC.

Fowler is a hero at Liverpool and a poster-boy for Risdale-profligacy at Leeds but his spell at Manchester City is often forgotten about – with good reason.

Signed by Keegan in January 2003, the striker only scored two goals in his first half-season at Maine Road and struggled with injuries throughout his time at City.

But Fowler did score memorable goals against both Liverpool and Manchester United, improving sufficiently to be named one of the club’s best players in 2004-05 – something he said was: “one of the proudest achievements of my career.”

Fowler returned to Anfield in 2006 and retired in 2011 after spending the final years of his playing days in Australia.

He’s since moved into coaching and has managed Muangthong United in Thailand, Brisbane Roar in Australia and East Bengal in India.

Currently unemployed, Fowler has expressed interest in the vacancy at Aberdeen.