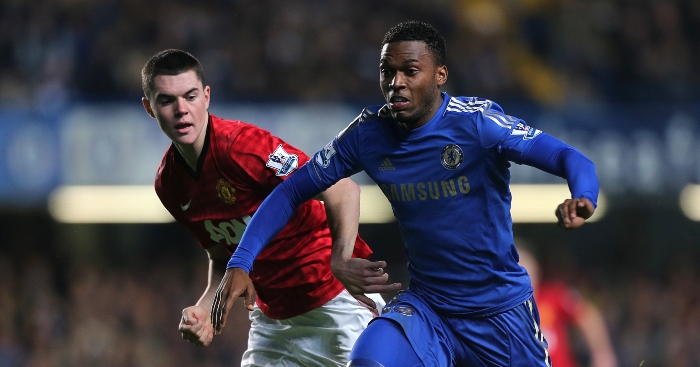 Manchester United only won one trophy in Sir Alex Ferguson’s final season, but it’s the one that mattered. Indeed, the Premier League triumph may well have been more straightforward because of an early exit from the League Cup.

United were one point behind Roberto di Matteo’s Chelsea when the Blues eliminated them from the competition in the fourth round. By the time of the quarter-finals United were six points clear of Manchester City with Chelsea a further four adrift.

Ferguson’s team travelled to Stamford Bridge on Halloween 2012, Marcus Rashford’s 15th birthday and the day after Arsenal beat Reading 7-5. We’re not saying United’s selection that night contributed to them shipping five goals, but we’re not not saying that.

The 2012-13 season was Lindegaard’s busiest, with the Dane briefly taking David de Gea’s starting place when the first-choice keeper went through a difficult patch of form.

He played 13 games that season – he would end his United career with just 29 in total – including the 5-5 draw with West Brom that brought the curtain down on Ferguson’s tenure.

After spells with West Brom, Preston and Burnley, largely as a backup, Lindegaard joined Swedish side Helsingborgs for their 2019 season and helped them retain their top-flight status in their first season back in the Allsvenskan.

One of the more senior players in United’s XI, Rafael played 28 league games in 2012-13 and scored a career-high three goals. None in this game, though.

The Brazilian arguably suffered more than anyone else as a result of Ferguson’s retirement, falling out of favour under subsequent managers and leaving for Lyon in 2015.

Now in his fifth season with the French club, Rafael could pass the 109 appearance mark – his total in a United shirt – this season.

Having made his full debut against Newcastle United in the previous round of the League Cup, Keane earned another start at Stamford Bridge, only for the game to seemingly indicate to his manager that the academy product was not ready for the Premier League.

Keane was loaned out to Leicester City the next day, playing more than 20 games for the Foxes and helping them reach the play-offs, but he only played once in the league for the Red Devils before leaving for Burnley permanently in 2015.

Things have got better since then, though, with the centre-back racking up more than 100 Premier League appearances and breaking into the senior England side.

Wootton famously had a nightmare for Daniel Sturridge’s extra-time goal, leaving a headed backpass short and allowing the England striker to run through and give Chelsea the lead.

The young Englishman would play just once more for United, a 90-minute run-out against CFR Cluj in a Champions League defeat, completing a permanent move to Leeds United in the summer of 2013.

Wootton played under five different permanent managers in his three seasons at Elland Road before moving onto MK Dons and Plymouth Argyle, for whom he scored his first goal in League Two in September.

Another veteran of that 5-5 draw with West Brom, Büttner scored on his United debut against Wigan Athletic in September 2012 and was making his first away appearance for the club at Chelsea.

The Dutch defender is now back at Vitesse, the club from whom he originally joined United, having punctuated the spells with an unsuccessful stint with Dynamo Moscow.

Büttner was replaced at half-time by Nick Powell, another debut scorer in that Wigan game. Powell joined Stoke City from Wigan this summer.

Nani’s 2012-13 season was mixed to say the least. His 11 games were enough to earn him a Premier League medal, but he only scored three times in all competitions – including in the 5-4 – and was handed just 195 minutes after being sent off in United’s Champions League exit at the hands of Real Madrid.

The Portuguese winger was expected to leave at the end of the campaign, only for David Moyes to take a stand and give him a new deal to show he couldn’t be pushed around. Nani made his permanent exit in 2015 instead.

Still just 32, he has been enjoying his football in MLS, top-scoring for Orlando City in his first season with the club.

The Chelsea game was one of just 10 played by Fletcher in the 2012-13 season as he struggled with ulcerative colitis, and his final minutes under Ferguson came on Boxing Day against Newcastle United.

The Scottish international played a handful of games under David Moyes and Louis van Gaal before joining West Brom in 2015, adding more than 100 top-flight games for Albion and then Stoke City.

Having left Stoke in the summer, the 35-year-old is yet to officially retire but has been linked with a technical role back at Old Trafford.

Signed in the same summer as Nani, Anderson made less of an impact than his colleague, playing just 105 league games across eight seasons.

The Brazilian, who won the Golden Boy award a year into his time at Old Trafford, had well-documented injury and fitness issues and retired this year aged 31 after stints in Italy, Brazil and Turkey.

He was replaced at Stamford Bridge by Ryan Tunnicliffe. It was a second and final United appearance for the academy midfielder, who is now playing Championship football for Luton Town.

Giggs scored two of United’s four goals at Stamford Bridge, including an extra-time consolation when they were 5-3 behind, and it proved to be his last ever double for the club – just weeks before his 39th birthday.

The Welshman added three more goals, one in the FA Cup and two in the league, with the last of them arriving in January against QPR. He played 22 times in his final season, 2013-14, without finding the net.

Having failed to earn the United manager’s job, he’s now in charge of Wales, whose qualification for Euro 2020 hangs in the balance.

Chicharito scored 18 goals in the 2012-13 season, with one of those strikes helping put United 2-1 up at half-time in this game.

That’s twice as many as he scored for United after Ferguson’s retirement, though, and he eventually left for Bayer Leverkusen after playing his final minutes for United in the 2015-16 Champions League play-off against Club Brugge.

Having returned to the Premier League with West Ham, scoring a goal every 187 minutes, he moved to Sevilla in August and has surprisingly already scored a goal for the Spanish club from *outside the box*.

Having enjoyed a breakthrough 2011-12 season, Welbeck had a tougher time in front of goal in Ferguson’s final season. He did, however, net at the Bernabéu in the last 16 of the Champions League.

Injuries have plagued the striker’s career since, the latest coming just as he was beginning to find his feet for new club Watford.

The Manchester-born forward was taken off during extra-time against Chelsea, with Federico Macheda coming on. The Italian striker played his final United minutes a few weeks later against Cluj, and is now at Panathinaikos after spending the last half-decade moving around England and Italy.