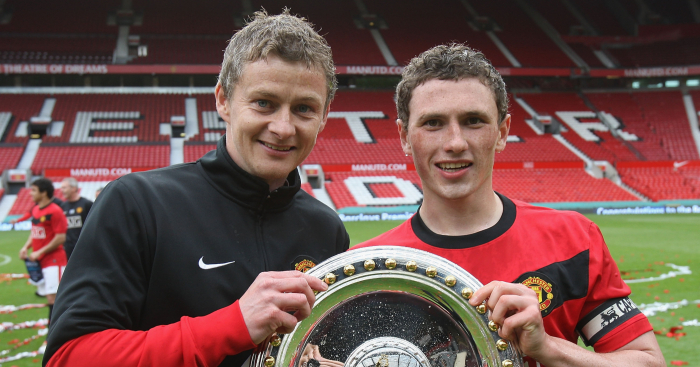 Ole Gunnar Solskjaer is currently working wonders with Manchester United‘s first team, but what happened to the players he coached as reserves boss?

One of Solsjkaer’s first coaching roles came as reserve team manager at United between May 2008 and November 2010.

We’ve taken a look back at his side which beat Aston Villa on penalties in the 2010 Reserve Premier League play-off final after a 3-3 draw.

There were high hopes for Foster with both Manchester United and England after the goalkeeper moved to Old Trafford from Stoke City.

Despite being named Man of the Match after starring in the 2009 League Cup final, he struggled to usurp Edwin van der Sar as No.1, failing to make the most of his first-team chances with a poor start to the 2009-10 season when the Dutchman was injured.

After winning the reserve league, Foster moved to Birmingham City and, to his credit, continues to carve out a career as a reliable Premier League goalkeeper with Watford.

One of the most successful players among this squad, by the end of the 2009-10 season Rafael had already appeared 44 times in all competitions for United’s first team.

Only a month prior to the reserve final, the right-back had been sent off as United were knocked out of the Champions League by Bayern Munich.

Now 28, the Brazil international is into his fourth season at Lyon but showed he remains a Red Devil at heart after helping the French side win at Manchester City in the Champions League.

A sad tale, Dudgeon appeared for Manchester United’s Under-18 side at the age of just 15 and was rewarded for his performances in the reserves during 2009-10 with a first-team squad number but had to retire due to injuries in 2015 after a spell with Hull City.

The Leeds-born defender now works as a youth coach for both Northern Ireland and Manchester City, for whom he also acts as a scout.

The younger brother of former United centre-back Jonny, Evans captained the side to the victory against Villa but failed to make a senior appearance for the club.

Capable of operating in defence or midfield, Evans has established himself in the Championship with Hull and Blackburn since leaving Old Trafford permanently in 2011.

De Laet was named Reserves Player of the Year at the end of 2009-10, by which point he had also made the last of his six appearances for the first team.

The defender went on to claim the unique honour of winning the Premier League title with Leicester City and promotion from the Championship with Middlesbrough in the same season.

It turns out De Laet has started 2019 by being converted into a striker by former United coach Warren Joyce at Melbourne City, where he is on loan from Aston Villa, recently scoring the club’s fastest ever A-League goal as he bagged a brace in a 4-3 win over the Western Sydney Wanderers.

Absolutely everything about that sentence confuses us.

The son of former United chief David, Gill was highly rated at Old Trafford, winning the Reserve Player of the Year award in 2011 and also appearing on the bench for the first team on a couple of occasions.

But he left United after winning the award to study economics at Durham University.

A Championship stalwart, the midfielder has helped Brighton and Fulham win promotion in the last two seasons and is now in contention to make it three in a row with Sheffield United.

The midfielder most recently played for Ho Chi Minh City in Vietnam.

Currently without a club after a spell at Lincoln City, Stewart is perhaps best known for taking legal action against Leeds United after the club reneged on an agreement to sign the winger on a permanent contract due to a number of unimpressive performances while on loan at Elland Road.

Want to know all about him, do ya? Well isn’t that convenient?

READ: The seven stages of Federico Macheda’s career: From golden boy to nomad

Solskjaer described Diouf, who followed in the striker’s footsteps by joining United from Molde, as a player with “fantastic potential” during his time at Old Trafford.

The Norwegian tried to sign Diouf while in charge of Cardiff, but the Senegal international eventually moved to Hannover before returning to England with Stoke City.

The goalkeeper had to face competition from Foster, Ben Amos and Tom Heaton in United’s reserves but found himself established as a No.1 in the Bundesliga with six months of leaving Old Trafford for Hannover, a role he now fulfils with Stuttgart after a season at Leicester City.

Wootton appeared four times for United’s first team, most notably in a 5-4 defeat to Chelsea in the League Cup, but now plays for Plymouth Argyle in League One.

The winger was brought on in the final only to be substituted off again 19 minutes later. Obertan has played for Levski Sofia since 2017.

The striker replaced Obertan in the 75th minute, but his career has been blighted by injuries. He recently joined Ipswich Town on loan, scoring the winner on his Championship debut.