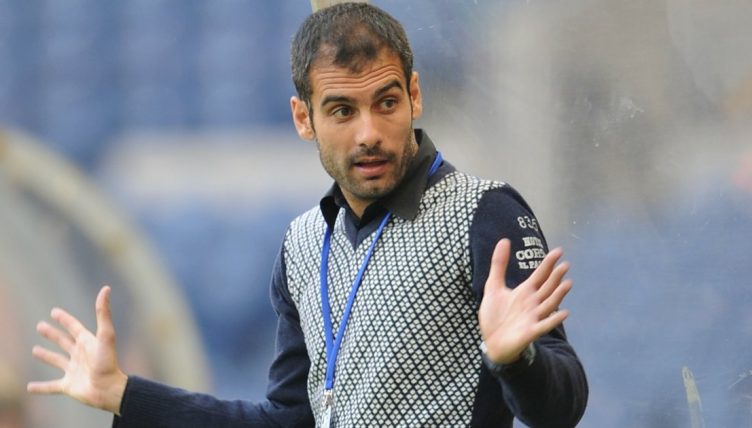 Pep Guardiola has become one of the great football coaches of his generation, leading Barcelona, Bayern Munich and Manchester City to countless titles and changing the way the game is played with his tactical innovations.

But before he became one of the great stars of modern football management, Guardiola spent the 2007-08 campaign cutting his teeth in Spain’s fourth tier with Barcelona B.

Unsurprisingly, it was a success. After a tough start, Barcelona’s young side – featuring players who went on to achieve great things with Guardiola later – won their group in the Tercera Division, before moving onto the play-offs, through which they earned promotion to the Segunda Division B.

After easing through their semi-final, Guardiola’s side faced UD Barbastro in their group final and came out comfortably on top over two legs, winning the first 2-0 and the second game 1-0.

That second game was Guardiola’s last in charge at that level – come the summer, he was given the reigns of the first team. We’ve looked at where the players involved in the 1-0 win over Barbastro are now.

By the time that Marca B faced Barbastro On 15 June 2008, Oier had already done enough to be handed a senior first-team debut, featuring in a 2-2 Copa del Rey draw with Alcoyano. The following season, with Guardiola as the first-team coach, he made another senior start – but it was his last.

Oier stayed at Barcelona as third or fourth choice for the first team and a regular in the B team until 2014. But with opportunities limited, he moved on, spending time as the back-up option at Granada and Real Sociedad.

Two seasons at Levante brought more opportunities but after falling out of favour again, he moved back to Barcelona with Espanyol in 2019.

Right-back Corcoles was a relatively experienced 22-year-old by the start of the 2007-08 season, having spent time at Herucles and four seasons with Valencia’s B team. And for Barca, he was more a B team squad player than a long-term prospect.

He never got a chance with the first team and after one more season with Barcelona B, he left to start off a career that has seen spells at lower-league sides Recreativo, Albacete, Racing Santander and Vilamarxant, where he retired at the end of the 2020-21 campaign.

Chico’s spell at Barca was short and sweet. He came in on loan in early 2008, helped Guardiola’s side to promotion and then headed back to parent club Cadiz.

He then set off on an itinerant career, spending time in Italy, Qatar, Russia and Wales – where he played two seasons in the Premier League with Swansea – as well as in his native Spain.

On British shores, Chico is perhaps best remembered for being laughed at by Sam Allardyce after a theatrical fall. But it’s safe to say Chico had the final chuckle when Allardyce was given the heave ho by the FA in 2016 after a single game as England manager.

Not as talented as his more famous namesake, but a solid player nonetheless.

Torres is a defender or defensive midfielder who played two games for the Barcelona senior side in Guardiola’s first season at that level before moving on to a career that was mostly spent in Spain’s top two tiers with Malaga, Levante, Getafe and Betis.

More recently, he went international with Perth Glory and Kuwaiti side Al-Arabi, before returning to Spain with Lugo in 2020 and narrowly avoiding relegation to the third tier.

Like Corcoles, Espasadin was a 22-year-old squad player for Barca B and, like Corcoles, he never appeared for the first team.

After moving on from Barca B in 2010, Espasandin spent a year in Cyprus and another five in Spain’s fourth tier before seemingly calling it a day.

In 2018, however, he popped back up in New Zealand with Metro FC, who play in the Northern Regional Football League Division One. Sounds glamorous.

Lets go with the sub before the starter. Valiente was Barcelona through and through, coming up at La Masia alongside Lionel Messi and Cesc Fabregas.

After failing to progress into the first team, he moved on to Sevilla, where he again got stuck playing with the B side. Following a move to Real Valladolid, however, he finally established himself as a senior pro, spending five years with the Madrid club.

From 2015, he went on tour, playing for Maccabi Haifa, Eupen in Belgium and Partizan Belgrade. He’s now at Sporting Gijon in the second tier.

The man Valiente replaced in the game with Barbastro has done OK for himself, hasn’t he?

Dimas fits in the Espasandin and Corcoles bracket here. A few seasons knocking around the Spanish lower leagues were followed by two in the A-League with Western Sydney Wanderers.

An unlikely spell with Bengaluru FC in the ISL proved an inspired move, however, providing an Indian summer for Delgado’s career.

He retired in 2021 after four seasons in southern India, saying: “When I came here I never imagined that I would spend maybe the four best seasons of my life as a footballer.

“As a player I have enjoyed everyday here, because of you boys in the club. My family also enjoyed a lot it was because of you guys. So thank you so much. I will never forget this”.

Another La Masia graduate, Vasquez was rated extremely highly, even competing with Lionel Messi to be seen as the youth teams’ star.

Cesc Fabregas once said: “I remember Messi and Victor were by far the best players in our team. Sometimes they would go in for head-to-head duels. If one scored four in one game, the other would hit five.”

Vazquez’s career didn’t quite turn out like his Argentine mate’s of course, but it has been interesting. Three first-team appearances and one goal for Barca were followed by four and a half seasons with Club Brugge, as well as spells in Mexico, Canada and Qatar.

Most recently he has been found back in MLS displaying his attacking midfield inventiveness and free-kick wizardry with LA Galaxy.

Abraham, meanwhile, made one senior Barcelona appearance, then spent the best part of his career in Spain and Mexico. He moved to Cyprus in 2020, where he remains with AEK Larnaka.

Barcelona was already Guerra’s tenth club when he arrived aged 25 in 2007 to play for Guardiola’s B team. He’s added 11 more since, including Atletico Madrid’s second string and a Romanian second-tier side.

Assulin was a prodigious talent and one of the many wunderkinds saddled with the unfortunate ‘new Messi’ tag. He scored 10 goals for Barca B that season and was even handed a senior cap by Israel aged 16.

In 2018, Assulin was asked about his season under Guardiola by Sky Sports. He said: “It was definitely the best time of my career. It was not just the goals, I really enjoyed playing under such a great person.

“He was very close to all of the players. I think that is one of the reasons why we gave everything for him. Everyone enjoyed the style of play. He gave us a lot of freedom.”

Unfortunately for Assulin, his career never really kicked on from there. He moved to Manchester City without having made a first-team appearance for Barca and ended up making his senior professional debut in the Championship while on loan at Brighton.

From there, Assulin became a journeyman, turning out mostly in the Spanish second tier, with spells in Israel, Kazakhstan alongside Andrey Arshavin and Romania. He’s now playing for Crema in Italy’s Serie D.

Venezuela-born Jeffren has had an even more wide-ranging career, taking in stints in Portugal, Spain, Belgium, Switzerland, Cyprus, Croatia, the UAE and now Thailand.