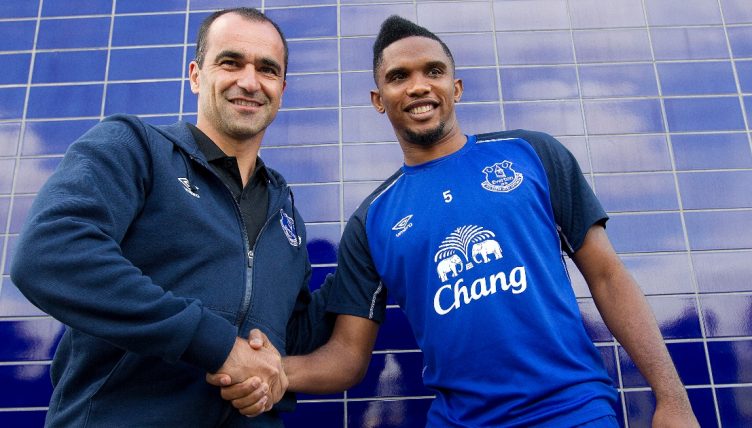 During his three-year stint at Everton, Roberto Martinez divided opinion and his transfer record was definitely a mixed bag.

Martinez is being heavily linked with a sensational return to Goodison Park, having spent almost £160million on signings in his first spell at the club.

From Romelu Lukaku to Aidan McGeady, here is a look back at Martinez’s signings during his time at Everton and where they ended up.

Kone was Martinez’s first signing after following him from Wigan Athletic. The striker scored just 10 goals in an injury-cursed four-year spell at Goodison Park before joining Sivasspor on a free transfer in 2017.

He scored 35 goals in 134 games for the Turkish club and helped them play Europa League football for the very first time in 2020-21.

But the 38-year-old was released at the end of that season and currently finds himself without a club.

The Uruguayan centre-back was another player tormented by injury problems, making just 21 appearances in two seasons at Everton.

Nicknamed ‘Alcatraz’ by supporters, he was often criticised and is best remembered for a very poor performance against Dynamo Kyiv in the Europa League in 2015.

He joined Las Palmas on a free transfer in 2015 but made just seven appearances for the club before moving back home to Paraguayuan club FC Libertad in February 2016.

The 39-year-old now plays for fellow Paraguayan team Olimpia and helped them win the league title in 2019.

Another player who followed Martinez from Wigan, Robles was signed for £2million on a five-year contract in 2013.

He eventually usurped Tim Howard as Everton’s first-choice goalkeeper in 2016 but fell out of favour following Ronald Koeman’s arrival.

After being released in 2018, the 31-year-old joined Real Betis on a four-year deal and has since made over 75 appearances for the Spanish side.

The skilful Spaniard initially joined Everton on loan from Barcelona in 2013 before penning a permanent deal in 2015 for £4million.

He became a bit of a fan favourite at Goodison Park due to his ability to produce moments of magic but was also deemed surplus to requirements by Koeman.

The winger had a brief loan spell at AC Milan before Barcelona activated their buy-back clause to bring him back to Camp Nou in 2017.

But he couldn’t break into their star-studded team and returned to the Premier League a few months later, spending three seasons at Watford.

The 27-year-old left Vicarage Road following their relegation to the Championship in 2020 and now plays for Serie A side Udinese.

Looking ahead to Sunday's game at @Arsenal with 10 of the best against the Gunners.

One of Martinez’s better signings, Barry joined from Manchester City in 2014 and was a solid holding midfielder for Everton in his three-year stint for the club.

He broke the record for most Premier League appearances during his time at West Brom and decided to hang up his boots in 2020.

The Toffees could certainly do with another Gareth Barry in their squad right now.

Another decent signing for the Blues, McCarthy had an excellent first season after signing from Wigan for £13million in 2013.

He made over 133 appearances in all competitions but a horrendous double-leg-break injury in January 2018 signalled the end of his Everton career.

After two seasons at Crystal Palace, the 31-year-old returned to Scotland with Celtic in 2021.

Undoubtedly Martinez’s most successful signing, Lukaku initially joined Everton on loan from Chelsea before making the deal permanent in 2014.

The striker rejoined Chelsea in 2021 for a club-record £97.5million, where he has so far scored eight goals and managed to annoy the entire fanbase.

He led the line with plenty of #PL goals ⚽️ pic.twitter.com/SZam2Bjdn1

The tricky Irishman was an exciting acquisition for Everton, who signed from Spartak Moscow for an undisclosed fee in January 2014.

He made 43 appearances for the Blues but failed to live up to expectations and scored just one goal in his three-year stint at Goodison Park.

After loan spells at Sheffield Wednesday and Preston North End, the winger completed a permanent move to Sunderland and is still a regular for the League One side.

One of the most pointless signings of Martinez’s Everton tenure, Traore joined on loan from Monaco in January 2014.

The Ivory Coast international scored on his debut in the FA Cup against Swansea City but made just one more appearance before suffering a season-ending injury.

He then went on another series of loans at CSKA Moscow, Sporting Gijon and Amiens but continued to struggle with different injury problems.

The 31-year-old last played at Turkish club Bandirmaspor but was released in February 2021 and is yet to find a new club.

A player touted to be the next big thing, Besic gained a reputation for being hot-tempered and injury prone while at Everton.

The midfielder famously made a terrible mistake against Chelsea with his very first touch in a competitive game for Everton, playing a sublime back-heel through ball… to Diego Costa in a 6-3 thrashing at Goodison Park.

After loan spells at Middlesborough and Sheffield United, he returned to Everton but failed to make a single first-team appearance in 2020-21.

The 29-year-old was released in 2021 and returned to Hungarian side Ferencvaros, who sold him to Everton in 2014.

Signed from MK Dons in 2014, Galloway failed to establish himself in the first team and most of his time with the Blues was spent on loan with West Bromwich Albion and Sunderland.

He signed a permanent deal with Luton Town in 2019 but managed just six appearances in all competitions before being released in 2021.

The left-back dropped down to League One with Plymouth Argyle in 2021 and is finally playing regular first-team football.

Atsu signed for Everton on loan from Chelsea in 2014 but failed to score in 13 appearances in his one season at the club.

The winger then went on loans to Bournemouth and Malaga before finally getting some regular playing time at Newcastle, who he joined on loan in 2016 and permanently in 2017.

Despite being a popular figure under Rafa Benitez, he was deemed surplus to requirements by Steve Bruce and joined Saudi club Al-Raed in 2021.

A four-time African footballer of the year, Eto’o joined Everton from Chelsea in 2014 on a free transfer.

The striker showed flashes of his former brilliance but only managed 20 appearances and four goals in his brief spell at Goodison Park.

After reportedly falling out with Martinez over his tactics, he joined Sampdoria in 2015 and went on to play for Antalyaspor, Konyaspor and Qatar SC before retiring in 2019.

After 10 years at Tottenham, Lennon completed a £4million move to Everton in the summer of 2015.

The winger scored eight goals in 45 Everton appearances under Martinez but found himself down the pecking order following Koeman’s arrival.

He then joined Burnley in 2018 but left for one season in 2020 to play for Turkish club Kayserispor before returning to Turf Moor in 2021.

Cleverley, who worked under Martinez during a long spell at Wigan in 2010-11, joined Everton in June 2015 on a free transfer from Manchester United.

But the midfielder certainly didn’t live up to those standards, and he was sold to Watford in 2017 for £8million, which at least was a nice bit of profit.

He’s still a part of the squad at Vicarage Road and has now made over 150 appearances for the club.

Holgate is unbelievably the only player on this list who still plays for Everton.

The centre-back was bought from Barnsley in 2015 for £1.26million and has had a mixed time at Goodison Park.

He has made over 110 appearances for the club but is seen as inconsistent by Evertonians and has often been left out of the squad due to competition from Michael Keane, Yerry Mina and Ben Godfrey.

There has been reported interest from clubs such as Newcastle United and Burnley, with Everton open to offers at the right price.

Possibly the most pointless signing on this list, Rodriquez joined Everton in 2015 and played just one game in his two-year spell at the club.

The striker never really broke into the first-team squad and went on loan to Brentford and Waasland-Beveren before joining Danubio permanently in 2017.

After short spells elsewhere, he returned to Danubio in October 2020 and still plays for the Uruguayan side.

Funes-Mori is best remembered for his near-leg breaking challenge on Divock Origi in a Merseyside derby at Anfield in 2016, who then kissed the Everton badge after being sent off.

The defender joined Villarreal in 2018, playing 48 matches for the club and winning the Europa League before his departure to Saudi team Al-Nassr in 2021.

We take it all back… THIS is the most pointless signing on this list.

Tarashaj was bought by Martinez in January 2016 for £3.6million after showing great potential playing for Grasshoppers FC in Switzerland.

But he didn’t manage a single appearance for Everton in his four-year stint at Goodison Park.

The Switzerland international went on multiple loans, returning to Grasshoppers twice, spending a season at Eintrack Frankfurt and having a brief spell at FC Emmen in the Dutch second tier before being released in 2020.

Despite being 26 years of age, he now plays for FC Zurich’s Under-21 side.

Last, but CERTAINLY not least, Niasse achieved cult hero status at Everton after a rollercoaster spell with the Blues.

The striker was signed from Lokomotiv Moscow in January 2016 for a truly staggering £16million price tag and scored just nine goals in 42 appearances.

But he still created some great moments for the Everton fans, including a match-winning brace against Bournemouth after being out of the team for months.

The Senegal international left Everton on loan for Hull City in 2017, playing 19 games and scoring five (including one against Liverpool), and then went to Cardiff.

After being released by Everton in 2020, he joined Huddersfield Town in 2021 but never made a first-team appearance and was released a couple of months later.

A throwback to when Oumar Niasse single handedly won us the game against Sunday’s opponents Bournemouth.

A big 🖕🏻 to Ronald Koeman. pic.twitter.com/CYxpUxoc6E