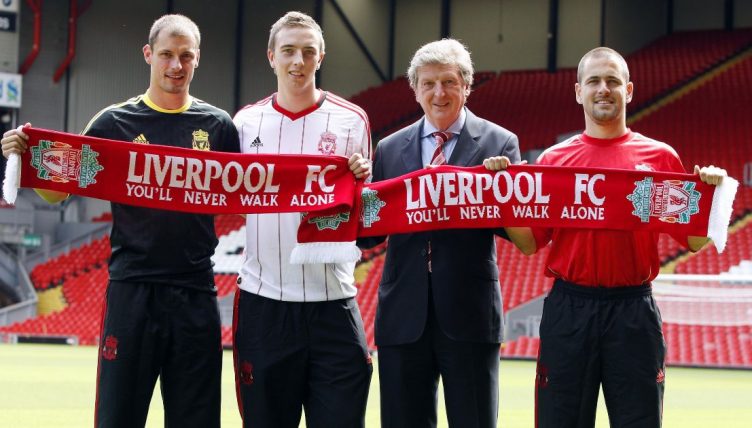 Hodgson had just guided Fulham to a Europa League final, where they lost in extra-time to Atletico Madrid, and his stock was high. Steven Gerrard said his appointment was “worth the wait”, while Jamie Carragher said it had “given us all a lift”.

However, Hodgson lasted just six months in charge at Anfield, with the eight signings made during his one transfer window at the club failing to take the team to the next level. Here’s how they fared.

Joining in a £3million transfer from Hodgson’s former club Fulham on deadline day, Konchesky signed a four-year deal and was soon installed as the Reds’ first-choice left-back.

It’s fair to say neither fans nor Kenny Dalglish shared Hodgson’s faith in the Englishman, however. And after one game against Stoke in which Konchesky was barracked by supporters, his mum took to Facebook to label them ‘Scouse scum’.

He unsurprisingly spent the second half of the season out on loan, at Nottingham Forest, before signing for Leicester City permanently in July 2011.

After dropping down to non-league towards the end of his career, Konchesky rejoined Billericay Town as assistant manager to Jamie O’Hara in August 2020, but the pair left four months later.

Poulsen joined from Juventus for £4.5million on a three-year contract as a replacement for Javier Mascherano, but it’s fair to say he did not impress supporters.

In November, attempting to defend Poulsen, Hodgson said: “He’s not that bad on the ball, but let’s not beat about the bush and try to disguise the fact – he’s had a bad start.”

He improved slightly under Kenny Dalglish but was ultimately deemed not as good as Jay Spearing and left for French outfit Evian after just one season and 12 appearances in the Premier League.

Poulsen went on to spend two years at Ajax before retiring in 2015 after one final season back in his homeland with Copenhagen. He’s now an assistant coach for the Denmark national team.

In a transfer agreed during the Rafa Benitez regime, Shelvey, then only 18, joined the Reds from Charlton Athletic for £1.7million following a number of impressive displays in League One for the Addicks.

The midfielder made his debut as an extra-time substitute in the shock League Cup exit to Northampton at Anfield but went on to make 21 appearances in all competitions that season and was generally regarded as a player with promise.

He stayed for two more years before departing for Swansea in 2013 with a not-too-shabby 69 appearances and seven goals to his name for Liverpool.

He netted his first goal for Swansea against the Reds but was at fault for their two goals in the same game, and after three seasons in South Wales he moved to Newcastle United, where he finally got to work with Benitez.

Shelvey still remains an important player on Tyneside under current boss Eddie Howe, but injuries have kept him sidelined for most of the 2022-23 campaign and he’s never shaken his reputation as a talented but flawed midfielder.

The biggest-money signing of Hodgson’s brief tenure, Meireles joined the club for £11.5million from Porto, taking the No.4 shirt vacated by the outgoing Alberto Aquilani.

And unlike most of Hodgson’s other signings, he was actually quite good, scoring some brilliant goals and winning the PFA Fans’ Player of the Year award at the end of his first season.

Just like several of Hodgson’s signings, though, he still left after just over a year, handing in a transfer request to force a move to Chelsea, where he also enjoyed a decent season and earned a Champions League winner’s medal.

Meireles retired at the end of the 2015-16 season after a four-year stint with Fenerbache. He most recently made headlines for appearing on Lip Sync Portugal.

A player described as “one of the greatest players in the world” by Neighbours character Andrew Robinson (yes, really), Jovanovic was lined up by Benitez, though the forward later said either party could renege on the agreement following apparent interest from Inter.

He joined Liverpool on a free as planned having netted 69 goals in 153 games for Standard Liege. After claiming he had previously turned down a move to Real Madrid, hopes were high for him.

He scored just twice for Liverpool, though, including in that game against Northampton.

When Hodgson left the club, Jovanovic struggled for opportunities, often not even managing a place on the bench under Kenny Dalglish, and after just one season and 18 appearances for Liverpool he returned to Belgium and signed for Anderlecht.

He scored 24 goals in 90 games there before seemingly disappearing off the face of the earth.

READ: Milan Jovanovic may be responsible for the most superbly sh*t PL moment ever

Another signing lined up by the transfer committee before Hodgson’s arrival, it was actually Kenny Dalglish who gave the defender his Premier League debut, in a 3-1 defeat against West Ham United at the Boleyn Ground.

Wilson made eight appearances in total that season but just one more over the next two as he was loaned out to Blackpool, Bristol City and Hearts, who he joined permanently in 2013.

The defender now turns out for Colorado Rapids in the MLS after a three-year spell back at Ibrox.

Cole signed from Chelsea on a free transfer after his contract at Stamford Bridge expired, with Steven Gerrard soon famously comparing his technical ability to that of Lionel Messi.

Cole was a wonderful, wonderful player and might have been even better were it not for the injuries, but he started as he would go on at Anfield, getting sent off after 45 minutes of his Premier League debut for the Reds against Arsenal.

He was loaned out to Lille the following season, and after six months back at Anfield was shipped out on a free transfer back to West Ham, with Liverpool reportedly paying him £3million to get him off the wage bill.

After spells with Aston Villa and Coventry City, Cole finished his career with Tampa Bay Rowdies in the North American Soccer League.

He returned to Chelsea as an academy coach but left his role in June 2020 as he works towards becoming a manager, while doing punditry work for BT Sport.

After Middlesbrough failed to gain promotion back to the Premier League at the first attempt, Jones sacrificed first-team football for the chance to sit on the bench, if he was lucky, for five years at Anfield, joining the Reds in a deal worth £2.3million.

Like a number of Hodgson’s signings, Jones debuted against Northampton, but he made only one more appearance that season and finished it out on loan at Derby County.

He subsequently enjoyed spells in the Eredivisie with NEC and Feyenoord and spent three years at Al-Nassr in the Saudi Professional League before his contract expired in June 2021.

READ NEXT: Fun, cocky & a real character – why Roy Hodgson is nothing like you think

TRY A QUIZ: Can you name every African player to appear for Liverpool in the Prem?