Where are they now? Team GB’s XI from their 2012 Olympics opener 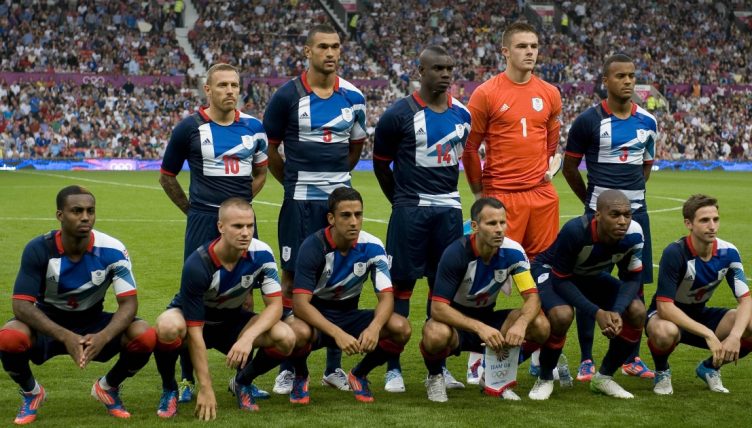 On July 26, 2012, Team GB kicked off their London Olympics campaign with a 1-1 draw to Senegal. It was a summer where football was relegated from national obsession to part-time sideshow.

Manager Stuart Pearce picked a young squad, supplemented with three overage players, and they made it out of the group after beating United Arab Emirates and Uruguay before losing on penalties to South Korea in the quarter-finals.

Nine years on, we’ve taken a look at the Team GB Xl from that July evening at Old Trafford to see how they’ve fared since.

Butland played all four of Team GB’s games at the Olympics, but was unable to save any Korean penalties in the quarter-final shoot-out.

The goalkeeper was making his name at Birmingham City and 2012, with many tipping him for a move to the Premier League. Stoke won the race for his services and Butland played 169 times for the club between 2013 and 2020.

Yet there’s a sense of unfulfilled potential about his career. Butland has suffered from numerous injury problems, and only played one Premier League match for Crystal Palace.

Four Welsh players started the match against Senegal. With Euro 2020 still only containing 16 teams, the chances of Wales qualifying for a major competition seemed slim and many Welshmen took the opportunity to play tournament football.

Taylor was another ever-present during Team GB’s campaign. The full-back, part of a Swansea City side making waves in the top flight, broke his ankle shortly after the tournament and missed the entire 2012-13 season before starring at Euro 2016 as Wales stormed through to the semi-finals in France.

He stayed at Swansea until 2017 before switching to Aston Villa, where he stayed until the end of the 2020-21 season before leaving at the end of his contract. He remains unattached.

Bertrand entered the Games as a European champion, making his continental debut during Chelsea’s iconic victory over Bayern Munich in the 2012 final.

His Olympics were significantly less successful – the full-back was dropped for GB’s second match against the United Arab Emirates before returning for matches against Uruguay and South Korea.

Making 19 appearances for England between 2012 and 2017, Bertrand carved out a solid Premier League career at Southampton during a seven-year spell on the South Coast.

Bertrand moved to Leicester City after his Southampton contract expired in July 2021.

Another person who wouldn’t be receiving a Christmas card from Jose Mourinho any time soon, Rose was recently considered one of the best full-backs in the Premier League.

Part of the Tottenham team under Mauricio Pochettino that won neutral’s affections during the mid-2010s, Rose was a very modern footballer who was as competent going forward as he was defending.

But the England international started openly talking about leaving Spurs and he slipped down the pecking order before Pochettino was sacked. Mourinho wasn’t a fan, and Rose was sent on loan to Newcastle in January 2020.

He wasn’t even given a squad number for the 2020-21 season and Rose left Spurs under a cloud. He’ll be playing his football at Watford this year.

It’s safe to say Caulker’s had a more eventful career than most.

He scored on his only England appearance, had a bizarre cameo as Liverpool’s emergency striker and has bravely spoken about the gambling addiction that threatened to derail his life.

Caulker eventually rebuilt his career in Turkey, first with Alanyaspor and now with Fenerbache who signed the defender on a free transfer in June 2021.

The football career of Micah Richards was at its peak in July 2012.

Having made 37 appearances during Manchester City’s title-winning campaign, Richards played every game of Team GB’s quest for gold and was still in contention for the England team.

But injuries began to derail his career. By the time Richards left the Etihad in 2015, the only surprise was that he was still at the club.

A disastrous spell at Aston Villa followed, with Steve Bruce publicly criticising Richards’ lack of fitness. He retired after leaving Villa Park in 2019.

The defender is now a popular pundit and his infectious laugh even cracks a smile on Roy Keane’s face.

Three weeks until the Premier League is back… and so are these two ❤️pic.twitter.com/Y0OprHCfIc

“Cleverley is the best home-grown young player Manchester United have had since Paul Scholes. No question.”

These were the words of Eric Harrison, the former United youth coach who oversaw the Class of ’92’s development  – no pressure then, Tom.

The pint-sized midfielder never quite lived up to Harrison’s billing, despite making 32 appearances during United’s last title-winning campaign.

He fell out of favour at Old Trafford, spending the 2014-15 season at Aston Villa before making a permanent move to Everton that summer.

It’s a long time since Cleverley played for England (eight years, to be precise) and he’s now back in the Premier League with Watford.

The Welsh midfielder followed Brendan Rodgers to Liverpool in 2012, but it never really happened for him at Anfield.

Despite Allen’s notable skillset, game-time proved limited and he left for Stoke in 2016. He suffered relegation in 2018, but he remains in the Potteries and has gone on to rack up over 150 appearances for the club.

Allen has experienced more success at international levels, being an ever-present for Wales at both Euro 2016 and Euro 2020.

But his compatriot has enjoyed a brilliant career. Ramsey served Arsenal well between 2008 and 2019, being responsible for numerous match-winning moments.

His time at Juventus hasn’t been quite as prolific, but the midfielder has shone at international level with both him and Allen being named in the Euro 2016 Team of the Tournament.

Sturridge scored twice at London 2012 but also missed the crucial penalty against South Korea in Cardiff.

Then at Chelsea, the striker flourished after moving to Liverpool the following January and contributed 24 goals to their 2013-14 title charge.

But injuries derailed Sturridge’s time at Anfield, with brief flashes of brilliance becoming overshadowed by long spells on the sidelines.

Remarkably part of Liverpool’s Champions League-winning squad in 2019, Sturridge joined Turkish side Trabzonspor that summer. Sadly, he left after receiving a four-month worldwide ban for breaching betting rules in March 2020. The 31-year-old was recently offered a trial at Real Mallorca.

Sordell had a nomadic career across the Football League before retiring in 2019. Upon leaving Burton Albion, the 28-year-old told the club website: “I’ve been fortunate to spend the past 10 years living my dream, but my happiness now lies outside of the game.

“My mental health has been severely impacted throughout my career, therefore I feel it’s the right time to move forward in my life.

“I have always been eager to help people who have had similar problems in their lives and going forward I’d like to be able to make a difference in football when it comes to mental wellbeing.”

Bellamy scored against Senegal with an opportunistic effort and captained the side for the Uruguay and South Korea matches.

It was a testament to Bellamy’s mental strength he was able to compete in the Games. The Liverpool forward was still grieving the untimely passing of Gary Speed and, later that year, told the Sunday Mirror: “Losing my best mate has affected everything. I can’t believe how hard it is I can’t tell you how hard it is. It’s the worst time in my life ever.”

Happily, Bellamy seems in a better place these days with regular appearances as a pundit on Sky Sports.

His replacement at Old Trafford has enjoyed a long career in the Premier League. Cork has served Southampton, Swansea and Burnley with distinction and the defensive midfielder remains at Turf Moor to this day.

Cork appeared as a substitute in all of Team GB’s group matches before remaining on the bench for the quarter-final defeat.