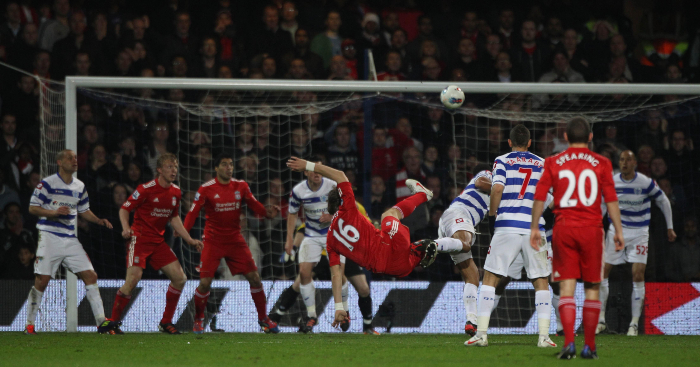 Kenny Dalglish experienced plenty of ups and downs in his second spell as Liverpool manager, which were reflected by his mixed success in the transfer market.

After replacing Roy Hodgson midway through the 2011-12 season, Dalglish immediately guided Liverpool to victory in the League Cup final but was eventually sacked after finishing eighth in 2012-13.

We’ve looked at the 11 signings that Dalglish made during his second spell in charge at Anfield, which go a long way to highlighting the hits and misses of his reign.

Suarez was signed on deadline day in January 2011 and immediately given the No. 7 shirt that was previously worn with such distinction by Dalglish himself.

After three and a half years at the club, in which he came so close to inspiring the side to the 2013-14 title, Liverpool sold the striker to Barcelona for £75million.

He’s since scored 191 goals in 270 appearances for the Spanish side, winning the Champions League and four La Liga titles. Not bad, we guess.

After selling Fernando Torres to Chelsea, Liverpool responded by spending a then club-record fee of £35million to sign Carroll from Newcastle United.

After struggling with injuries throughout his career, the former England international is now back at Newcastle trying to salvage his reputation as a Premier League striker.

“He always had your back – publicly and privately,” Henderson told Liverpool’s official website of Dalglish in 2017. “He would stand up for you when others were critical and would always be in your corner.

“He wanted the best for you personally but also for the team. That sort of backing was massive for me and I appreciate it to this day.

“As a manager Kenny was brilliant for me. He put me in the team, gave me the time and the environment in which to develop, and provided me with the kind of guidance that only someone of his experience could.

“I even have a constant reminder of what he did for me in the form of the League Cup winner’s medal that I won against Cardiff City in 2012. Speak to the other lads who signed for him and they’ll say exactly the same.”

Dalglish’s second spell as Liverpool boss may have featured some ups and downs, but you can’t fault signing the club’s future European Cup-winning captain.

Adam’s impressive performances for Blackpool in the Premier League earned him a dream move to Liverpool in 2011, but he only lasted one season at Anfield.

The midfielder then spent seven years at Stoke City before joining Reading on a free transfer in 2019. He hasn’t aged well.

Doni signed for Liverpool on a free transfer in 2011 and mainly served as the back-up goalkeeper to Pepe Reina.

The Italian didn’t feature in the 2012-13 season and later revealed that he had suffered a heart attack during a routine medical in the summer of 2012.

“I almost… I almost ended up on the other side. I had a heart attack for about 25 seconds,” Doni told CalcioMercato.com in 2013.

He joined Brazilian club Botofago on a free transfer in 2013 but was forced to retire a few months later.

Downing struggled to live up to expectations after signing from Aston Villa in 2011, infamously failing to register a single goal or assist in his debut Premier League campaign at Anfield, and fell out of favour under Dalglish’s successor, Brendan Rodgers.

After spells at West Ham and Middlesbrough, the winger joined Blackburn Rovers in 2019 and has established himself as a key figure for the Championship side.

Enrique left Liverpool in 2016 and spent a year back in Spain with Real Zaragoza before suffering a knee injury which curtailed his career.

Just eight months after retiring as a player, the Spaniard was diagnosed with a chordoma, a very rare brain tumour on the nerve behind his left eye.

In 2019, he revealed he had got the all-clear following treatment to remove the tumour.

“It hit us a bit more when I was completely healthy. When we finished the treatment, everything was a bit like, ‘Ooof! It really happened,'” Enrique told the ChronicleLive in March 2020.

“I believe in God and I believe everything happens for a reason and the most important thing in life is you have to learn from things that happen to you.

“I believe this may help me grow as a person and may help me realise what are the most important things in life.”

The 34-year-old now works alongside his brother who runs his own player agency, Auditu Sport, in Spain.

Coates failed to make the grade at Anfield and made just 12 Premier League appearances for the club before being sold to Sunderland in 2015.

The centre-back is currently playing for Sporting Lisbon and remains as error-prone as ever, conceding three penalties in one game earlier this season before being sent off in the same match. His comeback wasn’t much better, as he scored a late own-goal to condemn Sporting to defeat.

Sebastian Coates had already conceded three penalties, scored an own goal and been sent off in his previous two games when this happened 🙈 pic.twitter.com/GAQaANIfcR

Bellamy left Liverpool in 2007 but returned to the club for another brief spell under Dalglish in the 2011-12 season.

After hanging up his boots in 2014, Bellamy was appointed as Cardiff’s player development manager but stepped down from the role in 2019 amid claims of bullying from a youth-team player.

He then became the under-21s coach for Belgian side Anderlecht following the appointment of former Manchester City team-mate Vincent Kompany as first-team manager.

A promising young goalkeeper, Ward was picked up as an 18-year-old from Wrexham, with his only senior experience coming in the shape of one appearance on loan at Tamworth in the Conference.

Now a full Wales international, Ward made three first-team appearances for Liverpool across six years but caught the eye during loan spells at Aberdeen and Huddersfield Town, starring as the hero in two penalty shootouts to help the latter win promotion to the Premier League via the play-offs.

The signing of Alisson Becker further limited his first-team prospects at Anfield, and so he joined Leicester City in a £12.5million move in the summer of 2018.

But he has been restricted to appearances in cup competitions with Kasper Schmeichel still firmly established as the No.1 at the King Power Stadium.

An £830,000 signing from Sporting Lisbon in the 2012 January transfer window, Teixeira was just 19 at the time and Dalglish quickly tried to temper expectations for a player dubbed the ‘next Deco’.

Teixeira never appeared for Liverpool under Daglish and ultimately returned to Portugal with Porto having made just two Premier League appearances in three years at Anfield.

He similarly failed to establish himself at Porto but has fared better since joining Vitoria in 2018.